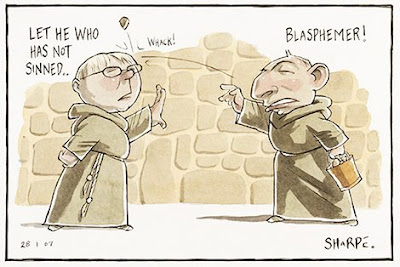 Tony Abbott seems to think that harking back to the days when he was a feral boofhead attack dog for John Howard is still the best way forward.
Was it a dream or a nightmare when several years ago he boasted about his people skills? When he put up his hand as a leadership candidate was it true that he suggested people were going to want substance, not spin from their political leaders, along with an ability to speak frankly and candidly? Why yes it was, still enshrined in PM's transcript for the 26th November 2007 under the header Liberal heavyweights put hands up for leadership.
Was it only last week that Sue Dunlevy was touting Abbott's credentials as the next PM of Australia, cultivating a level of delusion only matched by Abbott's delusional self-regard?
Why yes it was, in Abbott on first now Costello's struck out.
Featuring such gems as this:
That’s why Abbott has been most effusive in his tributes to Costello this week. At one stage the former trainee Catholic priest appeared to be comparing Costello to Jesus: “I think there’s no doubt that what Peter Costello did today was sacrifice his final chance to improve Malcolm Turnbull’s chance.”

A man who would have had a very slim chance of becoming Liberal leader if Costello had stayed on has now seen his chances improve considerably.

On Tuesday, Costello said the socially-conservative Abbott would take on the elder statesman role in the Liberal Party when he left. Abbott still has leadership ambitions beyond that.

“The short answer is I think I might,” he told The Daily Telegraph. “If my time is ever to come it will be after the next election.”

Proof of his ambitions is a new book to be launched next month in which Mr Abbott will parade his leadership credentials.

Like Barack Obama’s Dreams From My Father, Abbott’s book will be partly autobiographical. It will discuss the strengths and weaknesses of the Howard government and most importantly set out Tony Abbott’s conservative political philosophy.

Peter Costello spent 20 years in politics but never once set out his political philosophy in such a way.
Paul Keating proved that if you want to sway the votes of your colleagues, you've got to show you're serious by laying out why you want to run the country and how you'd do it differently.

Dearie me, I'm left breathless. Talk about a conflation - Barack Obama with Tony Abbott, and then Tony Abbott with Paul Keating, and then a dire evocation of the new colossus of Rhodes strutting the political stage, his vast shadow looming over the hapless Turnbull.
You can see why Turnbull is comparing Rudd’s debt binge with Whitlam’s. Costello’s gone. Now Turnbull must watch out for Abbott.
Oh it all sounds terribly grand, until we flick the channel back to Abbott's latest blog.
That's right, the recently revived feral attack dog is still banging on about the car scandal (I'm so over banging on about gates) in Rudd's mate got red carpet treatment.
Given access to a tabloid readership, this is the best he can do? Every point he makes is derisory and risible, especially when refracted through the reality that the car dealer in question actually got nothing. Nada, zip. At best it was always about a kind of procedural corruption.
It reminds me of the time the chairman of the board sent a couple of his friends to me for special attention, to help them get through the funding process. Being a sensible manager, I extended them every help. Extra meetings, much consultation. They ended up with zip - after all they had to satisfy the board, not just the chairman - and later the chairman went off to take a spell in Her Majesty's board and breakfast service on an unrelated matter. Such is life, so it goes.
Out of the ashes of an attempt to exploit this common kind of governmental interaction - where some people guard money, some people want it, and some  hold the keys - Abbott manages to discover a phoenix rising:
Press Gallery opinion is that this has not been Malcolm Turnbull’s week but I suspect they should revise their judgment. Opposition leaders calling for prime ministers to resign are just doing their job; prime ministers calling for opposition leaders to resign risk seeming slightly hysterical.
Actually Tony, opposition leaders calling for prime ministers to resign on the basis of a fake email aren't just doing their job, they're fucking it up in a grand way. What could have been a winner turned in to a bog swamp. But we love the loyalty. Show us some more:

This is actually the first time that Prime Minister Rudd has been a typical politician, bellowing in parliament that his opponents are corrupt. By contrast, while he was PM, John Howard never lost his dignity and was rarely if ever OTT in his criticism of Labor leaders.

Prime ministers and potential prime ministers have to be able to handle pressure. This week, the government threw everything it could at Turnbull and he never flinched. Because people expect more of a prime minister than of other politicians, this week should turn out much better for Turnbull than commentators think.

Ah yes, John Howard. How could we ever forget him. Since he seems to be like Menzies standing over the puny Liberals that followed.
But how will things turn out well for Malcolm after this week's shellacking? Oh I get it, because Malcolm will be able to serve, perhaps as Treasurer, in the first Tony Abbott government? Because he's unflinching and will be able to handle anyone calling up for a little help in getting a grant from government?
The government is still hyperventilating against the fake email because the real emails are so damaging. The real emails show that only Mr Rudd’s mate received the red carpet treatment: he got a personal call from the treasurer; his case was discussed in detail with Ford Finance; his mobile phone number was given to the CEO; he was allowed to self-assess his financial viability; and updates on his situation were sent to the treasurer’s home.

He got nothing, and the fatuity of banging on about procedural corruption is so obscurantist and jesuitical the public tired of it long ago. There's so many legitimate grounds for having a go at Chairman Rudd's government it's astonishing this is the best you can come up with after a week most of your colleagues would acknowledge has been a trip down turkey lane.
This is a bad case of crony capitalism. Under the Rudd government, it seems that success in business will depend upon connections, not skill.
Actually it's a bad case of mis-managed, inept opposition thinking, now blown so comprehensively that the net effect has surely been to make people despise all politicians that little bit more.
Not a bad week for a man touting his people skills perhaps, but a bad week for the political process.
Can't wait for the book of Abbott. Second thoughts, if the writing's as puny and pusillanimous as this, perhaps I can ...
Crony capitalism? Crony incoherence more like it ...
Turning and turning in the widening gyre
The falcon cannot hear the falconer;
Things fall apart; the centre cannot hold;
Mere anarchy is loosed upon the world,
The blood-dimmed tide is loosed, and everywhere
The ceremony of innocence is drowned;
The best lack all conviction, while the worst
Are full of passionate intensity.
Surely some revelation is at hand;
Surely the Second Coming is at hand.

Would you like a cup of tea, or perhaps a grant? We could put a lick of paint on that fence down at the CWA ...
Posted by dorothy parker at 8:14 AM