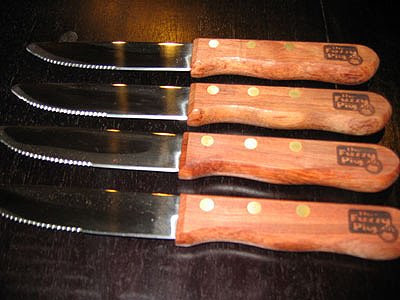 (Above: a set of fuzzy pig steak knives, essential for cutting up psychobabble and incorruptible ideology).
As the longest and dreariest week in federal politics - for a long time - draws to a close, there's still some excellent news.
Our much loved neo con neo liberal neo whatever, onetime esteemed neo treasurer of NSW, Michael 'Neo' Costa, has discovered he remains a class warrior, in Mal, lose 'born to rule' style.
In a dreary column, the smug columnist lectures and hectors Malcolm Turnbull on the art of politics, instead of doing the sensible thing and recommend he read Machiavelli's The Prince - which would make for a better read as well as better sense.
Still, if you can't get your kicks on Route 66, you might get a laugh out of Costa going Freudian on us.
Turnbull's body language during the government's censure motion was an insight into his political vulnerabilities. He looked uncomfortable, embarrassed and tellingly perplexed. Without degenerating into pop psychology, Turnbull looked like somebody who wasn't used to getting it so wrong. His career to date has played out successfully and he is no doubt accustomed to the self-confidence that derives from the success. Like many people that achieve early success, confidence in his unique personal attributes appears to be the key determinant of his actions.
That's right, as soon as someone says 'without degenerating into pop psychology', you know you've degenerated into it in a way that makes a degenerative condition positively deforming.
But wait, there's more. Costa always likes to offer a set of steak knives along with the meat grinder:
People who have such a heightened sense of their uniquely positive attributes often have a strong sense of destiny. Turnbull seems to think it is only natural that he will one day become prime minister. It must be even more frustrating for him to sit directly across the chamber from Rudd, whom he regards as unworthy of the prime minister's office.

Unlike the conventional image of a pop psychologist, Costa doesn't just sit in a big leather chair, nodding and saying nothing. No, he's more the transformational kind of therapist, big on EST, because what's needed in Mr. Turnbull is such a major makeover that even Buddha himself might find it difficult to lead him through the gateless gate to a new level of understanding:
In one sense it is good that Turnbull has experienced these emotions of confusion because, if the polls are at all accurate, these are precisely the public's feelings towards him. The electorate doesn't know what he stands for other than his own personal success. If he survives and is serious about achieving his ambitions, he needs to fundamentally change his approach.

Of course Kevin Rudd is extremely irritating and week after week, we've witnessed Costa drop his cool and vent his spleen at the rooster he clearly loathes. Which I guess is why he feels emotionally mature enough and aware of the pitfalls to sound exceptionally sanctimonious as he offers advice to poor old Malcolm in the middle of a big muddle:
No matter how irritating Rudd's smart-alec political opportunism is to Turnbull, he should avoid making this the primary point of political engagement. Frankly, as irritating as Rudd's personality is, Turnbull is just as vulnerable in the personality stakes, albeit for different reasons. In any event Rudd is already the Prime Minister, worthy or not, and the public will ultimately make its own judgment on whether they are prepared to put up with the smart-alec approach.
Sssh. No one must know how irritating Chairman Rudd is with his smart-alec, dipstick ways. But did I mention smart-alec? Twice? Is that dinkum speak or what!
Well you have to hope writing the column was therapeutic for the man who loved to conduct politics as an antagonistic, shouting, screaming match, with dollops of abuse for anybody who didn't see the world the way Costa saw it.
Because this kind of preening, useless therapeutic analysis will do bugger all for Malcolm Turnbull.
Though you might feel you've entered a kind of surreal la la land when you read that the sage neo con one dismisses education spending as an indulgence in Soviet-style school facilities.
That's just one example of what we've come to expect from Costa - a fine sloshing of verbal diarrhea. He loves to shoot off his mouth, with sense only a secondary consideration.
Each day I thank the lord he's transitioned into a commentariat columnist for The Australian, and has no discernible impact on the reality of the world the rest of us inhabit.
Soon enough the rest of the state Labor mob will be taking a well earned rest on the opposition benches. (Oh no, they're likely to infest newspapers as well, like fleas filling up the intertubes full to overflowing with how they did it in their day, and how they do it wrong these days).
There is however one columnist always worth a read and that's Jack the Insider, proving the benefit of eternal cynicism over Costa style psycho babble or ideological incoherence.
In AFP caught up in the bloodletting, Jack runs a tape measure over some of the recent Liberal claims in relation to the ongoing saga I can't possibly bear to name, pointing out amongst other things that it is the Northern Territory police handling the SIEV 36 investigation, not the AFP, that the AFP as issued one brief media statement in relation to the fake -email, that the media were camped outside Godwin Grech's house when the cops arrived, and that implications of a conspiracy theory from all and sundry, including but not limited to, Tony Abbott, Malcolm Turnbull and Piers Akerman are pathetic smokescreens for those desperately in need of someone to blame - such as the AFP - while desperately trying to hold on to their jobs.
After reading the incoherent rage embedded in Michael Costa - when will he seek therapy for his hatred of Kevin Rudd - it's refreshing to read an old hand like Jack taking a look at the real world.
But reading Costa's rant leads me to ask what is it with these old ex-Trots and ex-Laborites, who shift over to the other camp, and become even more fevered than their neo con brethren. It's not just Malcolm Turnbull and Michael Costa who's sounding like Mark Latham. It's Mark Latham!
In his outburst for the AFR on the 22nd June - ALP values caught in car affair headlights - (no link, it's behind a bamboo curtain of cash), Latham veers from quoting old fashioned Marxist and archaeology Vere Gordon Childe (who bored me silly with his history) to endorsing Vere's notion that the Labor party gets captured by the ruling class and their class allegiances, and once in power, doesn't know how to use their new found powers for anything except the profit of individuals.
Which might explain why Latham righteously avoided capturing political power, but not much else. Not content with reverting to Marxist thoughts from the nineteen twenties, Latham then jumps into a bizarro world not even Milton Friedman would recognize:
Neo-liberalism is not without its shortcomings as an economic philosophy, but one thing in its favour is the avoidance of conflicts.
Uh huh. Well I guess a war isn't a conflict, in a weird kind of way. Go on, drink some more kool aid, and tell me more:
As it does not support interventionist industry programs and government hand-outs to the corporate sector, MPs cannot be compromised in their dealings with business people.
Uh huh. Like the National Party doesn't support agrarian socialism and the Liberal Party never rustles up a dollar for its mates.
I guess there must be many alternative universes (maybe in the sixth or seventh dimensions) and perhaps some of them operate like this.
But wait, like Costa, you get a set of steak knives. This is, therefore, an incorruptible ideology.
Why do I hear the theme music for Bugs Bunny's Loony Tunes just at this moment? Pray expand on this vision:
The neo-liberal goal for economic policy is to frame fair laws for market competition, treating all industry sectors and companies equally.
Sure, and four legs are good, and two legs are baaaad, but we're all equaaaalll.
Right, that's it, this sketch has got completely silly, and must stop immediately, so now it's time for something completely different.
It's the weekend, have a good one, and be thankful that not only is Michael Costa no longer treasurer of NSW, but that Mark Latham isn't in federal parliament, but instead wastes ink and electrons at the AFR. And save your hard earned cash. 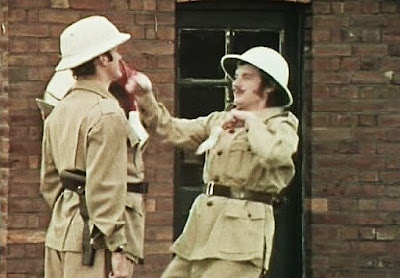 Posted by dorothy parker at 3:27 PM