Gerard Henderson, Tim Blair, Piers Akerman and the difference between a ute and an SUV 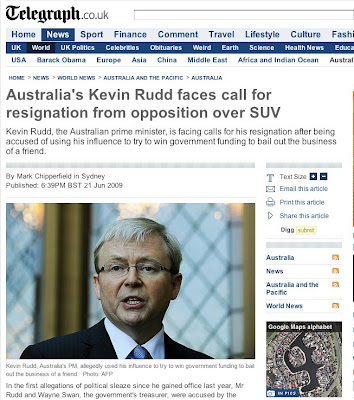 If you're ever to understand anything about Australia, you need to understand that a ute is a ute and an SUV is an SUV. A ute is a utility vehickle, the kind of car a man needs when he's a toting a bale of hay out to the back paddock for the cows, or looking for space for a quick root in the front paddock.
That way, the smell of hay mingles with the smell of sex and a man knows he's a man. Alternatively he might park the ute outside a suburban home and worry about whether the specially modified two inch clearance on his pride and joy will cope with gutters and potholes devised by devious council workers.
Whatever, the deployment of a ute in his political life shows how Chairman Rudd is a dinkum Oz bloke, a bit like his mangled deployment of fair sucks on sausages, sauce bottles and salami.
An SUV is something an American drives, because somehow he (or she) thinks calling a vehicle a sports utility vehicle makes some kind of sense. They know nothing. Like British journalists, who even  claim to be filing from Sydney. Get out of it, ya ponce, ya English SUV loving git.
Oh as for the rest, the mail is in, and utegate, tailgate, 1996 dud utility Mazdagate is a fizzer. The prim Gerard Henderson urges us to Close the gate on the beaut ute, naturally mourning the use of "gate" in the wannabe scandal and reminding us of his extreme awareness of US political history and Richard Nixon, with Watergate seemingly a major factor in the conquest of South Vietnam by communist North Vietnam (oh how the commentariat ceaselessly brood and love to distort history with facile insights).
Bored by our own particular "gate", Henderson takes the opportunity to muse about the lack of corruption in the Commonwealth, slag off former ALP leader Mark Latham for an unfortunate intervention, and bemoan the way nobody is actually discussing significant issues, such as the approaching Copenhagen UN Framework Convention on Climate Change in December.
Australian policy on carbon reduction really matters because it has a direct impact on both jobs and exports. Compared with this, the argument about a second hand ute is a trivial matter - just another gate blowing in the wind.

Well yes, but while Henderson suggests Rudd, Swan and Turnbull who are in no sense corrupt or corruptible, and suggests no one should resign, someone should surely take the credit for this total waste of time in relation to the governing of the country. And as if to prove he knows what it is to be a gate blowing in the wind, Henderson takes time yet again to muse about the wonders of the infallible John Howard:
When in opposition, Labor made much of the AWB's improper actions in the Iraq oil-for-food scheme and Rudd even accused Howard of lying about this matter. Yet no impropriety against any politician or senior public servant was established and Howard and his senior ministers were cleared by an inquiry which had judicial powers. If there were evidence of improper action it surely would have leaked by now.
Lordy, lordy, will this incessant worship never end? It's beginning to verge on the indecent, the way Henderson manages to work a reverential mention of Howard into his columns.
Meantime, over at the Terror, Tim Blair had even journeyed to Canberra, presumably to witness the demise of Chairman Rudd, and came away with a dismal report card: Played for fools and in strife.
Blair gets quite evocative about the Keystone comedy of the unfolding drama, evoking Tony Abbott in a way worthy of a comrade at arms:
The splay-footed Abbott repeatedly walked to and from his seat like Charlie Chaplin in Blundstones.
And his verdict?
If NSW hits Queensland as hard as that email news hit Turnbull, they'll win the State of Origin rugby league tomorrow night and face multiple homicide charges on Thursday.
There's plenty of other coverage (Malcolm Farr's Rudd's steel as Turnbull brings spoon to a knife fight) of a similarly negative kind, for Turnbull and the Liberals.
Only dear, sweet, dedicated Piers Akerman, our very own fat owl of the remove, remains determined to discover a conspiracy in Red herrings dragged over the really fishy business. Good old Akkers, you have to love him. The only loyal trooper still in the trenches with Turnbull battling it out, while the wimps and the turncoats try to get away from the machine guns.
But is his heart really in it? He doesn't once mention the disgrace of the long running Heiner Affair, nor explain how Mazdagate is linked to climate change and the global warming conspiracy, nor even note how this 'gate' might lead to the loss of Afghanistan in much the same way as Watergate led to the loss of South Vietnam.
As my uncle used to say in the shearing shed, "ducks on the pond". Back then, it had a different meaning (a signal a woman was approaching this male domain) but somehow it evokes the current scandal.
Psst. "Loons on the pond".
(Below: the sort of dressed up rubbish they call a ute these days). 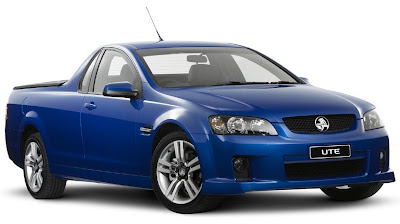 Posted by dorothy parker at 5:50 AM