Andrew Frost, the fetish of newness, the love of cinema, and the pleasure of contemporary art 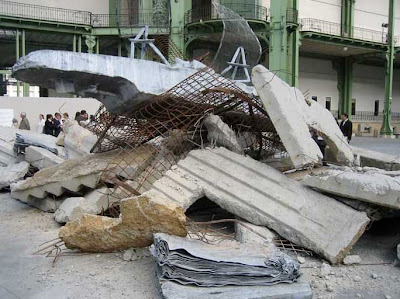 (Above: Ansel Kiefer and the building blocks for a Cinémathèque?)
You know I'm just so over old art. It's well, it's old. It's wrinkled, and the varnish has cracked, and it sometimes looks dull and faded.
Because it's old. The last time I looked at any old art, it was so old. Centuries sometimes. Why do they keep on keeping it on at the Louvre and the Met and the Musee D'Orsay and the Tate - well, you get my drift, I could go on and on naming galleries full of old stuff. It's amazing how all these places are just so cluttered, littered, with old art.
I mean, you could understand it from the French, backward looking and always celebrating their culture, and even turning bloody railway stations into art galleries, and the British with their Turner fetish, even if he never managed to finish his paintings, but the rest of us ... we should be so over old art.
Come to think of it, I'm over antiques of any kind, and antiquated thinking. That's why I'm standing shoulder to shoulder with Andrew Frost, who in Old is OK, but in with the new, please, makes an impassioned plea to throw out old thinking and old art and old ideas. Because, well, they're old.
Now you might think that what with the brand spanking new (well since November 1991, which is old, but not truly rooly old) Museum of Contemporary Art sitting on the banks of Circular Quay, new art might actually already have a focus in Sydney.
Especially since they've announced bold redevelopment plans that will see the institution transformed into a "global hub for contemporary art and ideas by 2011", serving the audiences of the future. You might even think you could get plenty of new art by wandering around the galleries clustered in the vicinity of Paddington and surrounds, which actually try to sell new art to new customers (why even in Newtown and Glebe there are galleries sprouting up like alfalfa, and we've even purchased a little new art there ourselves. So new you can even smell the paint).
You might even think the notion of new and old is a funny way of looking at art, or even the value and the interest and the pleasure and the understandings to be gained from art. But truth to tell, you can never get enough new art.
Speaking from a self-interested position, I would love to see the gallery exhibit contemporary art more consistently and be less driven by prizes. While exhibitions like the Anne Landa award for new media and video are something to look forward to, more survey shows of contemporary art and exhibitions culled from permanent collections are alternatives to biennial hoopla.