Miranda Devine, the war on drugs, Sweden, and a taste for Abba the way forward 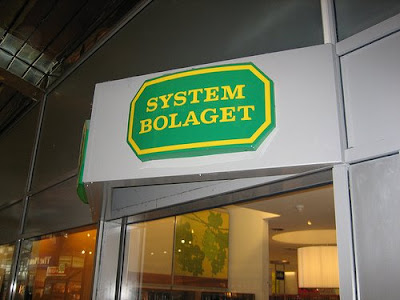 (Above: Systembolaget, the Swedish alcohol retail monopoly, designed to sell alcohol in a responsible way without profit motive, coming to Australia shortly if Miranda the Devine has her socialist ways. Read more about the delights awaiting you at systembolaget.se).
Miranda the Devine is at it again, with her splendid insight into drugs in That light on the hill is a Swedish beacon.
Against recent triumphal announcements that the war on drugs has been a failure, and that drugs have won, stands Sweden.

Once the most permissive country in the world when it came to illicit drugs, Sweden learned the folly of its policy as intravenous drug use grew exponentially in the 1960s.
Once the most permissive country in the world for drugs? Surely she's thinking of sex?
Never mind. What I particularly love is the Devine's infinite capacity to cherry pick, and her equally valiant capacity to compare Sweden with Australia.
She starts by taking her data from a relatively recent report on Sweden by the UNODC in 2007, which remarkably she neglects to provide a link for (you can find it here under Swedish drug control).
What I find most amusing about the Devine using Sweden as the model and exemplar is how she manages to avoid any reference to the nature of Swedish society - usually held up to risible derision by the neo con commentariat columnists because of its welfare policies, and enclosed social structures. If ever there was a Volvo loving welfare state that's been abused for its policies, Sweden would surely have to take the cake as a high taxing, suicide riddled nanny state on the verge of failure, not to mention bankruptcy.
Who can forget P. J. O'Rouke's unnerving denunciation of the place in Eat the Rich?
I was walking through Gamla Stan, the Old Town in Stockholm, when it struck me that Sweden was the only country I’d ever been in with no visible crazy people. Where were the mutterers, the twitchers, the loony importunate?

Well yes, you won't find many neo cons on the street at all, or even in the newspapers.

I keed, I keed. We love our loony importunate. That said, for all its earnestness, not much of Devine's musing has anything to do with the current US war on drugs, which is a dismal failure insofar as it relates to the trafficking of drugs across the US-Mexican border, and to the locking up of people in the US for minor drug offences, which has led to a rapidly expanding prison population - without any impact on the drug culture within the USA.
But the war on drugs has led to some interesting absurdities, especially in Afghanistan, where the US is forking out hefty amounts in terms of military expenditure and military lives to ensure that Afghanistan keeps turning out drugs for consumption in the United States (a process in which Australia is also a willing participant). If you want an insight into this strange world, you'll do no better than Mark Corcoran's program for Foreign Correspondent on The Bulldozer.
Of course all this only protects the rich and the powerful. Afghans are bitterly disillusioned with President Hamid Karzai. The billions in foreign aid have delivered neither security nor prosperity, just the bog of corruption and narcotics. Many, including the President’s own brother, have been implicated but few are arrested.

Now producing 90% of the world’s heroin and opium, Afghanistan is a virtual narco state. Drugs fuel half the economy. America’s top counter-narcotics official here admits he has a problem.

‘To what degree does this narco economy permeate the political leadership?’

CORCORAN: New mansions dubbed ‘poppy palaces’ have been built upon the opium profits and we’re on our way to one such pile to meet an old acquaintance from 2002. He’s since moved on to become America’s favourite warlord.
The rest of the transcript - about Corcoran's meeting with the Bulldozer, our new favorite warlord - is well worth a read, and if you head over there, you can also watch the program to get a better feel for the environment in which he put together the story.
If we're heading for a victory in the war on drugs in Afghanistan, can someone explain to me what a defeat feels like?
It's also interesting to read the actual report on Sweden - rather than Devine's cherry picked highlights - and to note that amphetamines - rather than heroin - have long been the particular problem of the Swedes. And along with their changes to their drugs policies, has come initiatives like the early introduction of needle exchange programs, methadone maintenance programs, and other intensive therapeutic programs, including coercive care - many of which relate to the country's social structures (I didn't want to say welfarism to spare the feelings of neo cons).
So can a closeted welfare state of under ten million people provide a guide as to how the United States and Australia should handle their own situations in relation to hard drugs and the "war on drugs"?
Well if you're Miranda the Devine, sure thing. If you live in the real world, you'd have to think the Devine was dreaming.
It'd be interesting for Devine to explain precisely how the Swedish experience can be translated to the American situation. It's interesting to read the preface to the report, and its references to the pre-conditions that assist the Swedes in their endeavours:
Sweden, of course, has had some advantages in addressing the drug problem. Sweden is not located along major drug trafficking routes. Income inequalities, which often go hand in hand with criminal activities including drug trafficking, are low. Unemployment, including youth unemployment, is below the European average. This reduces the risks of substance abuse.

International surveys show that the Swedish population is particularly health-conscious, so less prone to large-scale drug use. There is a broad consensus that production, trafficking and abuse of drugs must not be tolerated. Thus a clear and unequivocal message is given to the general public, notably to the country’s youth. Last but not least, with its strong economy, Sweden has the wherewithal to devote adequate resources to dealing with the drug problem. Increases in the drug control budgets in recent years went hand in hand with lower levels of drug use.
Well I'm no fan of drug abuse - I get tired to the junkies dropping over the back fence on a weekly basis in search of their fix, by way of lifting my hi fi gear or personal effects. Living behind bars makes you wonder who's in prison.
But I guess if we have to become a socialistic welfare state along the lines of Sweden, it's just a small price for a neo con like Miranda the Devine to pay. Joining the hive I mean. Becoming a collective welfarist socialist part of the solution.
The first two steps? Get out of Afghanistan and bring ties to the United States down to the sceptical, ambivalent, neutrality indulged in by the Swedes from the comfort of their remote part of the earth.
Then we can get on to the dour business of developing a taste for Lutheranism of the Church of Sweden kind, for chilly Ingmar Bergman films and for Volvos. I'm especially looking forward to the strict regulations on alcohol sales and consumption, and the way alcohol is priced to be very expensive. All with your very best interests at heart. Should work a treat in Australia. Government controlled beer!
Thank the lord we don't have to worry about developing a taste for Abba, which has already devoured Australia in a way even the swine flu virus would envy.
Oh and we'd have to provide ear plugs to the populace to shield us from the outraged howls of the neo con commentariat. I can just hear Tim Blair now shrieking about the Volvos, while Andrew Bolt has a special spot in his heart reserved for fear and loathing of the Swedes.
Come to think of it, the deal's sounding sweeter by the minute. Bring it on Miranda, your campaign to turn Australia into Sweden, you know I could almost live with it ... but can I just have some prescription methadone to help me get through the moments when Abba comes on to the public broadcasting system?
(Below: intoxicated Swedes dance in the midsummer light to the joy of drug free living, the only drugs in their pure Nordic bodies the endomorphins produced by their ecstatic trance like whirling dervish perambulations around pagan images). 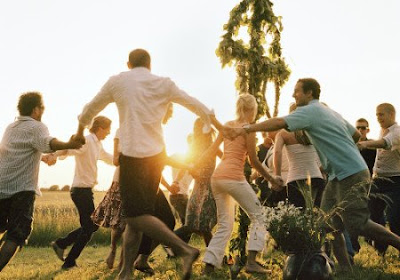 Posted by dorothy parker at 1:54 PM