Paul Sheehan, Malcolm Turnbull, Lord Cardigan and the charge of the light brigade of hapless gazelles 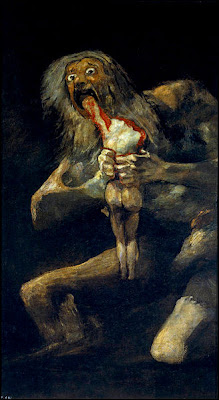 (Above: Goya, Saturn devouring his son).
A week's a long time in opinion poll writing, but I still have in my head Paul Sheehan's damning dismissal of the Federal opposition in The bruiser, the boof and the bore.
Taking as his major theme the dismissal of Christopher Pyne as a prissy, punctilious, irritating gadfly requiring the lighting of mosquito coils, Sheehan managed to wipe out the Liberal team in one fell swoop:
Pyne is part of a three-headed monster - the bruiser, the boof and the bore - that is never going to get traction against Kevin Rudd, no matter how many Labor mates they uncover who received very special treatment from the Prime Minister's chief surrogate, fall guy and Nambour High School mate, Treasurer Wayne Swan.

Because if the bruiser (Turnbull), the boof (shadow treasurer, Joe Hockey) and the bore (Pyne) represent the point of the sword of the Federal Opposition, it is a blunt instrument, a non-lethal weapon, the bluntest instrument the party has had in 13 years ...

He even contended that it was this deadly trio, not the Labor party, that were responsible for driving Peter Costello from the scene:
The weight of waiting, and the weight of history, was more than Costello could stomach. That and watching the bruiser, the boof and the bore leading the charge of the light brigade every day.
It was reminiscent of that painting by Goya which he painted on the wall of his house and entitled Saturn Devouring His Son, such was its savagery.
If I'd been in the Labor party, I'd have made a copy and circulated it as widely as I could, to all and sundry, as Sheehan mocked the Liberal party leadership and pilloried them as a set of clowns only capable of charging to death and destruction - with Malcolm Turnbull presumably Lord Cardigan, the hapless dummy who led his cavalry into withering Russian fire during the Crimean war.
Reading it, you got the sense that Sheehan wanted Turnbull dead, or at least gone, and not by the next election, but right now (and don't forget to take Christopher Pyne with you as you exit the revolving door), with Sheehan doing as conspicuous impression of a vulture as would be seemly in a family newspaper.
Which is why, having shown he's pretty adept at the fine art of the cudgel, the steel capped boot, and the bludgeon, it's hard to explain the actual point of his column today, entitled A hyena pack hunts in Canberra.
Well I guess the header highlights a different kind of hunting to the hyena pack that hunts in the press, but surely only on the margins.
Sheehan spends the entire column trawling through the Serengeti hyena hunting antics of Kevin Rudd, Anthony Albandese, Lindsay Tanner, Tony Burke and Chris Bowen, all intent on leaving Malcolm Turnbull a shredded political carcass, as if somehow this week he's transformed from Lord Cardigan into a pitiable hapless gazelle.
Never mind that the hyenas were a week late in joining the Sheehan hunt.
By the time they had trawled through Turnbull's past, the Opposition Leader was portrayed, under the privilege of Parliament, as a treacherous, bullying, smearing, opportunistic, justice-poisoning, forest-stripping, tax-avoiding, profiteering, cat-abusing loser.

I had thought all this was being warehoused for the next election. But no, they want him dead now.
But they'd missed out that he was a bruiser and Lord Cardigan reincarnate. Some don't need the privilege of Parliament to portray a loser, or the walking dead.
Is this latest column a case of be careful what you wish for, or hate the enemy of your enemy, or simply another anthropological excursion into the rich wildlife gathered around the Canberra watering hole?
Who knows, but it reminds me how much the SMH failed to fill the hole left by Alan Ramsey, a curmudgeon who smote all sides with admirable consistency.
If early reports are true that - after this day's poll results - Turnbull is now turning to old boofheads like Tony Abbott to resume their head kicking boofhead ways, Sheehan will have to reconstruct his abuse of the Liberal dream team into something like the bruiser and the mad monk. Will he also take credit for driving Turnbull into the arms of the hard men as the way forward, his only salvation from the bruiser being bruised?
Or worse, Sheehan might have to take credit for suggesting Lord Cardigan be replaced as the head of the cavalry ... and then getting what he wanted.
Posted by dorothy parker at 7:34 AM