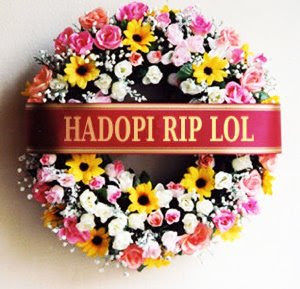 You know, unlike Janet Albrechtsen, sometimes I just love activist judges. The ones that tell politicians to get stuffed.
I'm particularly enamored of the judges on France's top constitutional court at the moment.
"Freedom of expression and communication is so valuable that its exercise is a prerequisite for democracy and one of the guarantees of respect for other rights and freedoms and attacks on the exercise of this freedom must be necessary, appropriate and proportionate to the aim pursued."
Right on dudes. Vive la France et liberte, egalite et fraternite. The cause?
The French Constitutional Council has ripped into the new Création et Internet law which would disconnect repeat online copyright infringers, calling the basic premise unconstitutional. "Innocent until proven guilty" remains a central principle of French law, and it cannot be bypassed simply by creating a new nonjudicial authority.

Better known as the "three strikes" law, Création et Internet set up a High Authority in France that would oversee a graduated response program designed to curb online piracy. Rightsholders would investigate, submit complaints to the High Authority (called HADOPI, after its French acronym), and the Authority would take action. Warnings would be passed to ISPs, who would forward them to customers; after two such warnings, the subscriber could be disconnected and placed on a nationwide "no Internet" blacklist. (French court savages "three-strikes" law, tosses it out).
The Sarkozy government and French Culture Minister Christine Albanel, who had threatened to resign if the bill did not pass, pushed the law through the parliament, while the Constitutional Council decided it would look back a long way to explain exactly why a three strikes and you were banned from access to the internet via bureaucratic fiat was wrong.
"Moreover, whereas under section nine of the Declaration of 1789, every man is presumed innocent until has has been proven guilty, it follows that in principle the legislature does not establish a presumption of guilt in criminal matters," wrote the Council. This basic principle applies "to any sanction in the nature of punishment, even if the legislature has left the decision to an authority that is nonjudicial in nature."
As the Ars Technica story notes:
To call the decision a "bombshell" is to do a grave disservice to bombshells everywhere. The French law has been a showpiece for the recording industry's worldwide graduated response campaign, and it's been one of the toughtest such laws proposed anywhere. The Council's censure appears to mean that disconnections—a penalty that the industry says is essential—must be treated like court cases, not "you're probably guilty" administrative proceedings. That, of course, was precisely what such systems were set up to avoid, since suing individual file-swappers hasn't worked so well and costs unbelievable amounts of time and money.
By the way, have I mentioned just how much I dislike Sony and explained why there are now no Sony hardware products in my house, when it was once the industry standard for much of the gear with which I worked? Could it have anything to do with this comment:
“I’m a guy who doesn’t see anything good having come from the Internet,” said Sony Pictures Entertainment chief executive officer Michael Lynton. “Period.”
Well forgive me if I can't see anything good having come from Sony's attempt to achieve a vertical integration between hardware and software, equipment and content, and bold misdeeds like Blu-ray and root kits for CDs in a half-assed attempt to stop piracy while holding their customers and the intertubes in contempt. And now those activist French judges have knocked them and their kind for six.
In other good news, it seems that the new Chinese government requirement that every computer be sold with internet filtering software has attracted the wrong kind of attention - because while ostensibly designed to block violence and pornography, it's already been alleged to block anything from discussions of  homosexuality to images of Garfield the cat (China defends net filtering software amid outcry).
Well, well, well, splosh. No doubt comrade Stephen Conroy, minister for intertubes censorship in the Rudd government, is following these developments with intense interest. Conroy, for those who've just arrived late to the story, is campaigning against "vulgar content" in Australia in much the same way as comrade propaganda chief Li Changchun is in China.
Yep, the Chinese government has a blacklist just like the one that Conroy dreams of perfecting, which of course can be adjusted and added to, but which can't be viewed by users. Move over Kafka, Conroy is the new man in town.
Well at the moment Conroy is off doing the dance with the new Telstra and  its new CEO, over the NBN and structural separation, and finding out that while the players might have changed, he still wants to do the foxtrot and they want to do the quickstep. But soon enough Conroy will have to present the results of his filtering trials, and meet his own Garfield moment ...
Pray for some activist Australian judges ... 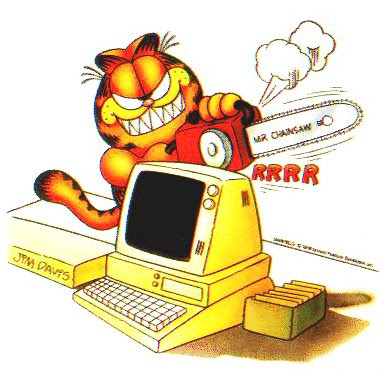 Posted by dorothy parker at 5:36 PM