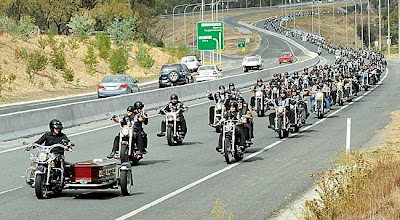 You have to hope that Penberthy's new rag The Punch is going to find better material than the dingbat offering of South Australian Premier Mike Rann's initial outing Defending the right of bikers to bash, kill, steal, deal.
The owl-loving Rann, who lives in his own alternate universe, opens with this sentence:
Civil libertarians around the country have condemned my new anti-crime gang laws aimed at outlaw bikie gangs. Defence lawyers and pseudo-academics have lined up to tell the public that the bikie gangs are a harmless sub-culture comprised of grandparents who simply like a ride on big bikes.
Well there in one go is the end of Penberthy's plea for civil discourse, though he set the tone by disbarring people with three degrees from his site, as well as yahoos and yobos. So how did Rann get a guernsey, with lines like pseudo-academics and straw man arguments of the most profoundly irritating kind? All you could expect from a pseudo-politician peddling pseudo-arguments with pseudo-exuberance.
Gee, this pseudo thing could replace Michael Costa's 'neo' brand, except it's tired and out of date by about thirty years.
But that's just the beginning of the Rann rant.
... for outlaw motorcycle gangs, it’s a different kind of freedom.
It’s the freedom to use illegal firearms. It’s the freedom to assault and intimidate. It’s the freedom to murder and rape, as well as manufacture and peddle drugs around Australia.

Err, did I miss something here? Did I miss the revoking of laws banning the use of illegal firearms? Did I miss the laws promoting the freedom to murder and rape? Did I fail to note in the daily press the brand new, well publicized in South Australia freedom to manufacture and peddle drugs?
What follows then is a gratuitously smug and self-serving justification of Rann's new laws about the right to freedom of assembly, that would be worthy of either Peter Costello or a Chinese government politician.
But then Rann is never short on rhetoric, always short on substance.
We have not taken this action lightly, nor are we recklessly indifferent to civil liberties.

Indeed, we will appoint a retired judicial officer to review the use of powers under the Act. His or her report will be tabled in Parliament.

Oh jerk my chain. It's exactly the same argument as Stephen Conroy saying that he's only censoring the intertubes to stop the pedophiles, and if you don't like it, you must be a pedophile.
So if  you don't like Rann's laws then you have to be in favor of "terrorists within" or part of some hardened criminal group set up for the purpose of serious crime.
Well no one with an IQ over 40 would trust either the cops or the government not to abuse the powers the Rann government has set in motion, thereafter to be aped around the country as politicians seek the easy Russian or Chinese way out in terms of regulating the lumpenproletariat.
Well I did a count of the 25 comments at time of writing in response to Rann, and it's good to report for the sake of peace loving Penberthy, they were pretty restrained when confronted by this kind of provocative, in your face insolence.
Sure one accused Ramm of Rovian message control, and others got themselves into a lather about bikies, but my count saw some 20 against, and four in favor, with one eccentric discounted for somehow managing to relate the topic to thugby league and sexual assault.
In short, an inglorious outing for an intemperate post, surely written in hast, and with an abundance of arrogance and a shortage of either insight or understanding.
The real question of course is how the police - given powers to and laws to control crime, drug dealing and bikie clans - have singularly failed to send them down, even though Rann assures us that the Finks Motorcycle Club have racked up an enormous number of convictions.
I guess it's too hard for Rann to actually think about the role that government plays - in the war on drugs - in empowering bikies and giving them an industry well worth their time, money, and the occasional criminal conviction.
Instead he peddles the usual nonsense about terrorists in our midst, and spruiks his war on terror like a brain dead political junkie wanting us all to know he's tough on crime - remembering of course that bikies aren't just harmless grandparents who like to ride on bikes. Does he go the full Rudi and dress in frocks as part of his tough on crime zero tolerance law and order routine?
If I was in South Australia at the moment, I'd cringe at the thought that this meglomaniac represents the best of state Labor. Sure John Bannon might have bankrupted the state, but at least he didn't indulge in this kind of mindless rhetoric.
Well Rann might huff, and he might puff, but his rhetoric gives the game away:
The stakes are too high to raise the white flag to dangerous criminals who believe they have a right to get away with using violence to support the most serious crimes.
The right to get away with using violence to support the most serious crimes? Did we suddenly enact this right? How did this come about? Why did I miss it? Goody gumdrops, I'm off to the 7-Eleven with my water pistol for a bit of thieving. Mike Rann says there's a white flag flying in the breeze.
Golly, it's such a temptation to break Godwin's Law, so let me settle instead for quoting a couple of the commenters:
On the matter of civil liberties: you and your party widely criticised the former Federal Liberal Party (and it’s bureaucracy, which now works for Federal Labor and our Dear Leader Kevin Rudd) for the Dr Haneef mishandling, yet expect that to debate a fundamental human right is somehow “defending the right of bikers to bash, kill, steal, deal”. This is unjustifiable.

Being a lawmaker, you should understand the doctrine of precedent. You would then understand the impact of such a law on bikies being applied to other organisations, however loosely associated or not. The implications of this need to be taken seriously, and not treated for short term political gain.

Even if a group of society has a much higher probability of committing certain patterns of crime does not mean we should generalize them all as likely to do so. Imagine I am not talking about bikies, but about crimes by indigenous Australians. Notice how we think about this differently when we switch the interest group? No matter how ugly or popular a minority group we should still extend these basic rights to all. This is one of the founding principles of our society.

Now I must confess that my train of thought has been a bit all over the place. Who can blame me? On a Sunday night I am innocently browsing the internets and I am confronted with this nonsense and try my best to respond with the aid of a half-baked Rove-melted brain.
Who'd have thought I'd have something in common with a libertarian Liberal voter (well at least I suspect so)? I guess all we can say is that when confronted with Rann's logic, the fuzzy cheese logic of  talking about "enhanced interrogation techniques" isn't a ringing endorsement of torture so much as an advertisement for a special kind of beauty treatment. But at least we're not the only dissidents:
I dont think anyone without a vested interest would argue that the criminal element amongst biker society has gone too far of late and need to be reeled in.

However (as reported at Control order - Fink's history a secret) last week’s proceedings in South Australia where a control order was applied to a member of an outlaw motorcycle club (which, by it’s very nomenclature begs the attention of law enforcement) without the recipient’s knowledge, during a court hearing held in the recipient’s absence and while the man’s criminal history - or lack of it - has been declared a public secret after a directive by the state’s most senior magistrate surely demand close scrutiny and cannot help but arouse the curiosity of some as to whether these laws are indeed suitable in a 21st century country like Australia which still, as far as I know, considers itself to be “free”.
Rann's just a tinpot dictator in a small state, and let it be understood (and let's say it over and over again so Conroy might also hear) that opposing a law is not supporting a crime, criminals or criminal endeavours. But just as Haneef copped the raw prawn, who knows which innocent soul might cop a raw prawn from Rann as he blathers about caring for caring for civil liberties, which these days sounds like only pseudo academics would give a rat's arse about.
Oh dear, confronted by this humbug and twaddle, and with my most recent sighting of Rann being in the Bollywood movie Love Story 2050 in Rundle mall (wherein he stood around looking like a vainglorious prize rhubarb), I do feel a breach of Godwin's Law coming on:
In South Australia, they came first for the bikies. And I didn't speak up because I wasn't a bikie ....
(Below: when life is full of happiness, or gherkins).

Posted by dorothy parker at 8:24 PM

I haven't read the law but I understand it doesn't mention bikies, only convicted criminals.
The communists, socialists, homosexuals and Jews of 1930's Germany weren't convicted criminals, and the "they" that came for them were the Nazis, who were the same type of human shit as the criminals that the SA law is being applied to.
PS I'm a thrice-daily reader of your blog and really appreciate what you're doing to those loons.