David Penberthy, The Punch, and Australia's best conversation needing to spice up its chat 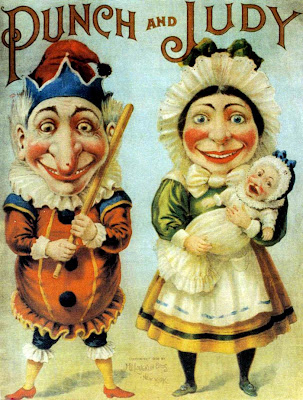 Is it time to get worried about and for The Punch, Australia's best conversation?
After all, it's only been going around for a couple of working weeks, and developing an intertubes personality takes time.
It's just not clear what kind of intertubes personality The Punch wants to develop, as a sign that the Murdoch empire is embracing a new digerati sensibility.
True, certain trends are emerging. Tory Maguire is working terribly hard at being the resident bubble headed booby, with her latest outing a dire piece of frippery summarised by the header You got me what? Men and the terrible gifts they buy.
Okay, so we're somewhere in between New Idea, Woman's Day and the Woman's Weekly, though any of those mags do this kind of stuff with well bred consistency and a keen awareness of their target audience's needs.
Click on the video accompanying Tory's cliched war of the sexes routine, and you get a man sent to the doghouse for buying a vacuum cleaner. It's hard to work out whether it or Tory offers up a more dire sense of humor.
Scroll down a little and we get Mia Freedman doing Eleven things no one told me about being a parent.
Advice on parenting? Okay same turf as Tory but with a little more relevance, and this time a Parenthhood movie trailer to provide some visual relevance.
But down below that we have a Postcard from Mexico: Generation of swine flu by Jorge Cervantes which sits oddly with Tory and Mia, even as it offers some personal insights into the pandemic in Mexico.
And the story below that is David Penberthy explaining that a recent soccer match was the best nil-all draw that he's ever seen, which is roughly equivalent to a cricket bore explaining how a magnificent five days of tedium ended in an exhilarating draw in which nothing happening achieved a monumental significance. Apart from slagging off the Dutch as a back handed way of praising coach Guss (or is that Guus?) Hiddink for his part in inducing glazed tedium in the brains of soccer watchers, Penberthy comes off as just another fan boy. Quick, back to bashing inner city elites.
And below that is Clive Mathieson, slagging off Macquarie Bank in a column headed Come back Macqarie Bank (yep another typo), all is forgiven. Bashing up Macquarie is always an enjoyable sport, but Mathieson adds little new to the pantheon of its crimes against humanity.
And below that Roger Coombs trying to whip up a little debate about belief in You are what you believe, which rather lamely suggests that politicians are more dedicated to adversarial politics than to their constituents.
And below that Naomi Toy explaining that Ramsay's attack was many things, but it wasn't sexist. Naomi's level of debate?
Here’s an oldie but a goody: Why do women wear makeup and perfume? Because they are ugly and they stink.

Some would say that joke, like Gordon Ramsay’s behaviour in recent days, is pretty offensive. But that personal favourite differs from the celebrity chef on two important fronts.

The first difference is arguably it’s funny. The second is obviously it’s sexist.
Arguably it's funny? To a ten year old boy in deep misogyny training in the school playground? Well if that's what we're arguably going to argue about, excuse me. Come on back Gordon Ramsay, all is forgiven.
And that's your lot for the day. There'll be a few more updates, and a few add ons, but the main roll out has hit the tubes, and what a mixed bag it is of lumpen, largely indigestible re-heated fodder, which makes refried beans a taste sensation.
It's hard to develop character in a website, especially one that's hoping to be generalist, and offering up a lot of its own content. Most sites develop a niche character that attracts like minds where they can all develop an incestuously loving, mutually supportive relationship. Generalist sites often use the news as the main game, with the columnists as the tasty tidbits on the side. Here the tidbits are front and centre, and all too often reminiscent of railway catering.
The Punch at the moment is flailing around, and its linear layout - which requires scrolling down to access its main columns - means casual readers are likely to hit Tory Maguire's meanderings about men buying terrible gifts at the top of the page, and stop dead in their tracks right there.
It's already feeling like it's time for a re-fit, or a re-tooling or a fine tuning, or whatever you want to call it. Content is a difficult thing - there's already so much of it available on the tubes that there's not much time for time wasting if you're going to waste as much time as you can in an efficient and pleasurable way.
The difference is that presumably The Punch is paying for its content, where many other content providers are just in the business of bottom feeding, with a bit of commentary and a lot of links. And payment for content on the tubes is to be cherished. You are getting paid guys, right? I do my typos for free.
So if this is the best the brains in the Murdoch empire can produce when they're allowed to frolic and play on the intertubes, they've got a lot more work to do if they're to get up to speed.
Oh, and reading politicians rant can be amusing, at least if it's Barnaby Joyce bashing anyone within range with an axe handle, but generally the musings of the pollies allowed to frolic on The Punch pages have been deadly dull.
Which goes to show how wrong Roger Coombs is to suggest that politicians at large spend their time seeking to discredit, to denounce, to ridicule and to abuse. If the offerings on The Punch are any guide, pious platitudes and dull dissertations are their stock in trade, as good a cure for insomnia as the world has devised.
Anyhoo, right now, I'm not feeling I'm in the middle of Australia's best conversation, so much as being stuck between a couple of blabber mouths in an over-crowded train carriage. Suddenly Murdoch's Sydney throwaway afternoon rag Mx is looking competitive ...
Posted by dorothy parker at 8:35 AM