Gary Johns, Samson and Delilah, and the need for fictional characters to live in the real world 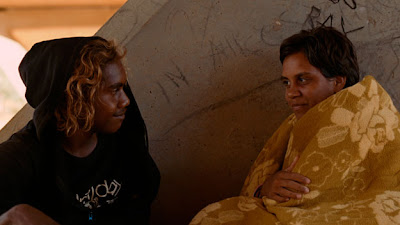 (Above: Warwick Thornton's Samson and Delilah).
Okay Bill Shakespeare. I'm gunning for you. You know that love story Romeo and Juliet. WTF is that all about?
Now I'm not blaming you for Baz Lurhmann's film, or even Franco Zeffirelli's or even George Cukor's, and let's not say anything at all about West Side Story, though the lord alone knows you have to share some of the responsibility.
Didn't you pause for a moment and think man, what you were scribbling? All that romantic gibberish about an almost fourteen year old girl hanging out with an older man? Of course it was going to end badly. And as for the ending! A couple of nice kids have to die just so a couple of families can end a violent feud?
And by the way, I just have to note that, apart from being a total rip without regard for intellectual property rights, your evocation of Verona is historically inaccurate.
Yes, Bill Shakespeare, supporter of pedophilic secret marriages by young people, creator of romantic star crossed notions of love, and a serial pirate who'd send a studio head into a frenzy. Even to this day you're held up as an example of creative commons at work on the intertubes!
Now don't get me started on A Midsummer Night's Dream and all that romantic tosh. Why on earth do you bring all the lovers to their senses and together and happy at the end? Don't you know that one third of all marriages end in divorce? Why isn't that in your romances?
Why do you send up the humble artisans then allow them to perform their play? What if the next day they get starstruck and give up carpentry? How on earth will they be able to make a living?
The fact is, Bill Shakespeare, I could chart the downfall of civilization through your vile influence and deceptive attempts at fraudulent art.
But instead I'll settle down and read Gary Johns' wonderful post modernist diatribe about Samson and Delilah in his column Myth of outback escape is unrealistic. You know, in the same way the ending of Thelma and Louise is realistic and the ending of the Titanic is totally realistic.
Johns is fierce about the sickening romanticism that runs through Warwick Thornton's work, which copped him a Camera d'Or at the Cannes Film Festival.
Apparently, Samson and Delilah is a love story. In the closing scenes, two Aboriginal teenagers - Samson and Delilah - run away from Aboriginal and white society to live on her country. They get there in a four-wheel-drive. She unpacks tinned food, she shoots a 'roo and sets up home in an abandoned tin shack among the remnants of a cattle station. She starts up the windmill and fills the water trough, she washes him, she sits him in his wheelchair and shecontemplates her dot painting. End of story.

Well, what happens on day two?

Oh I get it now. Johns wants a sequel. No, hang on a second, he thinks movies are a kind of legislative prescription, a reality descriptor, and should bang on about their characters until they're in the grave. Or conform to Johns' world view.
Which would make for a very dull movie, because Johns' world view is remarkably circumscribed.
You see he's only watching the movie for what it can reveal abut H. C. "Nugget" Coombs and the mindset which led to the romanticised outstation movement and the silly black notion of yearning for country, and even worse, thnking they can escape life by living in country.
Whereas white films by and for whites are never about romanticism and escapism. I know that for a fact, since I regularly visit Mars, and it conforms in every way to that wonderful documentary Total Recall.
But let's return to the agitated Johns:
The film industry just does not want to know the nasty truth at the heart of Aboriginal politics this film, perhaps unwittingly, has uncovered. The film brutally portrays the absolute degradation of behaviour and norms in Aboriginal society and that escaping the stringencies of white society is no solution. The critics' optimism is cruelly misplaced. Film buffs are escapists, but Aboriginal children cannot hide from society, indeed they often willingly embrace the bad parts of it. Our liberal-minded critics just cannot grow up. This is not the '60s, there is no alternative in the desert. If you think so, just ask Samson and Delilah.
Ah yes, you soft-touch liberals, you know nothing of the harshness of life, alone in the darkened theatres with your romantic delusions, incapable of grasping the fierce, unrelenting cruelty of the world, sucking on your giant tubes of sugar and scoffing greasy buttered popcorn. Any joy or hope or optimistic notion of pie in the sky must be stamped on with a firm jackboot (unless a female member of the commentariat, in which case a six inch stiletto will do nicely).
I'll leave it for you to read Johns' summary of the plot - we've both done too many spoilers - but I can't resist including his agitation about a little Christian bashing that goes on in the film:
One critic said it was "one of the bravest Australian films I've ever seen". And so it was, as a documentary. Except in one respect: Delilah enters a church (suspiciously like the John Flynn church in Alice Springs) and then wanders out under the stern eye of a clergyman, who offers no help. If this is meant to convey a message about the missions, it fails. The missions saved more than souls in outback Australia, they saved lives.

Ah yes the noble Christians picking up the white man's burden, and it's a fair exchange, taking away the country in exchange for saving souls and saving lives. Almost as good a deal as the natives got from the Dutch for Manhattan.
But I digress, because Johns' indignation knows only leaps and bounds of righteous agitation. And it's all the fault of that evil Warwick Thornton, who wanted to make a movie about kids escaping from petrol sniffing and despair:
Thornton says: "As far as telling a story that's realistic, I needed to go all the way and not hold back on how grim things are. Most 14-year-olds in Alice are walking around with the knowledge of a 90-year-old, from what they've experienced. They're bulletproof."

No they are not, they are traumatised and despondent.

Any answers, Warwick? How did you escape? What is your optimistic story? How did you learn to read and write? Do you live on country, totally dependent on the white man's petrol and canned food?
WTF? He's just made a movie man, a successful movie, and not just in terms of awards, but in terms of tickling the arthouse till with ticket sales. It's no big deal, it's not Das Kapital or even the Communist Manifesto. It's a movie you dingbat, not a prescription for aboriginal welfare policies or a blueprint for the Northern Territory intervention.
But no, Johns wants Thornton - and apparently every other black living in the centre - in a gloom of total despondency and despair. Enough of that defiance, back into that line and shuffle along, face down, the way Johns likes it.
Stay a moment further, because it wouldn't be a fully fledged rant without bringing in feminism:
Another critic wrote "(A) celebration of the resilience and nurturing power of womankind." For goodness' sake, the kid was hopeless, he pushed into her life (approved by the grandmother, no doubt with memories of her own youth) and bludged off her. No self-respecting feminist could applaud the film.
Damn you Bill Shakespeare, damn you to hell for Lady Macbeth. No self-respecting feminist could applaud that play or your vile interpretation of that gentle woman who just tries to give her man a little spine, a little ambition.
But sooth, what final barb can Johns muster?
Samson and Delilah continues the myth of escape, puts off the day when Samson and Delilah must be schooled in the way of living in the real world, far from the romance of the film world.
Ah yes, fictional characters must be schooled in the way of living in the real world, instead of living in the movie world they actually inhabit. I tell that to all my Shakespeare characters. You know you all seem happy living amongst your myths, up on the stage, or between the covers of books, but someday you'll have to be schooled in the way of living in the real world, far removed from the romance of the stage.
True, the fictional characters sometimes look at me oddly, and wonder why I'm hearing voices in my head, but I attribute that to their inability to live in the real world, far from the romantic nonsense we see in the movies.
It's got so I've taken to shouting at the screen these days. Matt Damon, I screech, it's all very well for you to continue the myths of espionage, and be a multilingual expert killer with lots of passports, amnesia and the odd girlfriend, but someday you're going to have to inhabit the dreary realistic world of John Le Carre. Oh that's a rights problem?
Never mind, perhaps I should be shouting at Daniel Craig for pushing that dastardly James Bond myth a step further than he should have in his last outing.
I could go on, but I just leave you with this final thought. Do you wonder why Gary Johns is so angry and harsh and vindictive and determined to strip from aboriginal film-makers the right to make films about their own romantic dreams and delusions, when Rupert Murdoch stumped up over $150 million (including $40 million in taxpayers' money) to fund the meretricious tosh that was Baz Luhrmann's Australia?
Well yes, but Australia is no more silly in the end than Puccini's La Boheme, and that's rather the point about art - to produce an emotional exchange, or at least an emotional impact, to get inside your head or your heart, and preferably both.
Johns' simply has no idea, and his interpretation reeks of irrelevant reductionist simplifications. Commentariat columnists often rant about post-modernists wanting to teach kids how to "read" movies, and when you read Gary Johns, you realize it's a good idea. It's a pity he seemed to wag that class during his schooling ...
(Below: Hedy Lamarr in Cecil B. DeMille's stunning realistic and devastatingly historical work Samson and Delilah, also starring Victor Mature in his prime. There you go Warwick Thornton, there's how to make a movie). 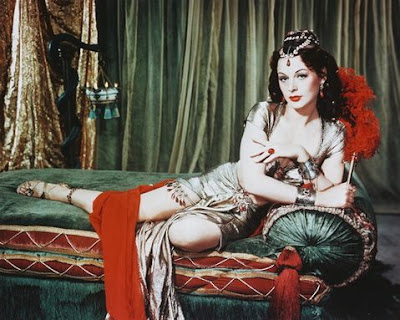