Tim Blair, International Outrage Week, the rage to be offended, Bizarro Codes, and Squares in a Round World 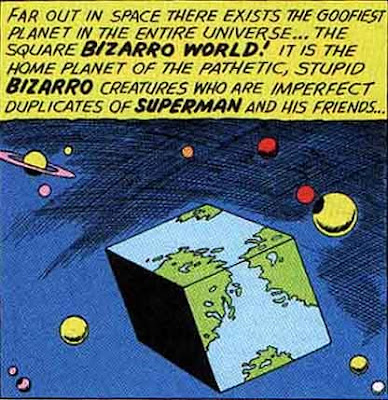 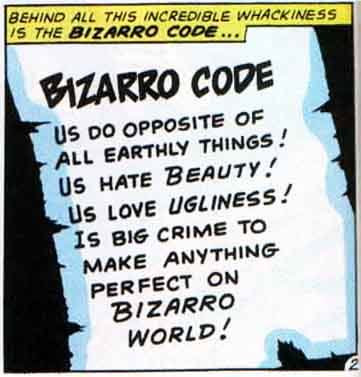 As a child, I always loved bizarro world - a fictional planet invented for DC comics, where "Htrae" is ruled by a Bizarro code.
"Us do opposite of all Earthly things! Us hate beauty! Us love ugliness! Is big crime to make anything perfect on Bizarro World!"
The planet's cube shaped and has a fractured cube fetish, evocative of the way Picasso and his ilk once upset the conservatives with cubism, and it always reminded me of the chooks that laid square shaped eggs, for greater ease in packaging, for Scrooge McDuck in one of Carl Barks' classic Disney comics.
There's a lot to like about Bizarro world perversity, but why you might ask am I taking a wander down a world which always gave Superman a curious, if comic grief.
Look no further than Tim Blair in his righteously indignant piece It's the rage to be offended.
Blair, who sometimes purports to be a humorist - though you need to give the word a generous, loose interpretation for it to fit - has a fine old time sending up people who get offended.
We should hold International Outrage Week every year. It's the best fun ever.

This year's IOW kicked off early with a certain Chaser sketch. The outrage was massive and the ABC gave its boys a two-week holiday. To get the same break at my job I have to be diagnosed with swine flu following a post-mortem.
The theme allows Blair to trawl through the week's outrages, including the fuss about the obscene Gordon Ramsay and the uproar following several Burger King fat, sugar and salt recycling restaurants in Tennessee putting up signs saying Global Warming is Baloney. As opposed to the crap they serve as a super sized exercise in weight gain. But we'll turn to the pain of public weight loss a little further down the page.
Blair then moves on to the current whereabouts of Al Gore, and his relationship to two female employees of Current TV recently jailed in North Korea. This allows him to conflate any number of favorite themes:
In reports about the imprisonment, AFP, the Seven Network, the ABC and Associated Press all avoided the inconvenient truth that Al Gore is chairman of the company for which the reporters work.

Gore visits Australia next month, during an already-freezing winter, to carry on about global warming.

Memo to our Chaser boys, who should be back on air by then - the names of the two jailed journalists are Laura Ling and Euna Lee. If you confront Al Gore over this and the item goes to air, I'll immediately throw $1000 at the docile, lefty charity of your choice.

Film and ridicule the big fat jet Gore flies in on or the limos he uses in Melbourne and this column space is yours the following week. I'll fix the typos.
Oh it's a fine chortle and a chuckle, and then it's on to the outrage at Woman's Day publishing shots of wife Therese Rein in a gym, losing weight, perhaps gained via consuming too much left wing baloney.
Never mind that Malcolm Turnbull also chimed in with confected rage about these snaps, this of course is only confected political rage and should be treated with confected contempt. How about conflating it with Rudd's comments on curry bashing? Easy peasy:
I'm friends with Woman's Day editor Fiona Connolly, so am biased, but this doesn't deserve a place in IOW. As Rudd said after this week's India-Lebanon night match at Harris Park: "I think everyone just needs to draw some breath on this . . . There are acts of violence every day. That's just a fact of urban life."

Women exercise every day, too. Draw some breath, Kev. Just a fact of life.
Then it's on to a sampling of indignant responses to a headline that upset sundry readers of a New Hampshire rag - "Chickens cooked in coop fire."
Chortle, snicker. But curiously Blair doesn't mention the outrage produced by David Letterman's joke about Sarah Palin's daughter getting knocked up at the baseball game.
Curious because his blog has been full of it for the past week. Rage that is. Let's check back to get some of the adjectives right:
Joke jerk ... blew it big time ... this whole disgrace ... he can see Bristol from his studio ... bizarre clarification .... cracked wise ... this debacle ... explanation "extraordinary" ... sounds like the sort of thing a stupid person might do ... non-apology ...  she's 14 Dave ... avoided any problem with jokes about Barack Obama by simply persisting with jokes about George Bush and Sarah Palin. It's as though last year's election never happened ... why aren't feminists upset?
Five or so posts, some with multiple updates, and links leading to fresh outbursts of rage from fellow travelers sharing the righteous indignation at this liberal New York show host's outrageous treatment of the Palins.
Draw some breath Tim. Bristol Palin got knocked up. Abstinence didn't work. It's a fact of life. Something to do with the birds and the bees. Or putting the doodle in the thingie.
Now from the tone of Blair's piece, you'd think he was against all the PC confected rage that's erupted this week when people should just kick back, take it easy, relax and laugh a little. Unless of course it involves David Letterman. Then it's can kicking time in extremis with the possibility that the world might end on Friday at 11 am unless he's sacked by the liberals running CBS.
Which leads me to think that if I was looking for a show pony for International Outrage Week I'd look no further than outraged, indignant Tim Blair, who lathers up confected outrage at the drop of a hat. I guess it's a living, feeding his chooks this pious, platitudinous patronizing outrage, balanced by a synthetic humor designed to send up lefties shitless, but really in a round world, what's good for the goose should be good for the gander, or vice versa.
But then I live in bizarro world, squares cubed to an infinite power, and I guess the only thing that squares this square with the bizarros of this world is remembering that their world view involves using only the right hand side rear view mirror. Which explains the kerb bumping, bumper scratching, fender bending on the left hand side of the vehhikkle.
Perhaps they should go live on a nice square world.
Update: this just in. Hilarious joke about Chelsea Clinton. Why is Chelsea Clinton so ugly? Because her father is Janet Reno. John McCain June 1998. 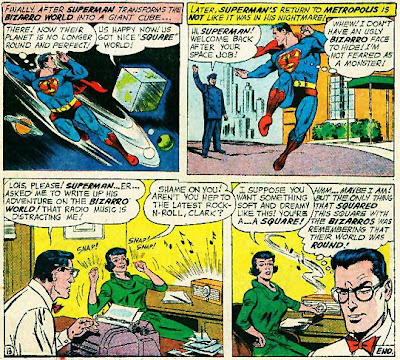