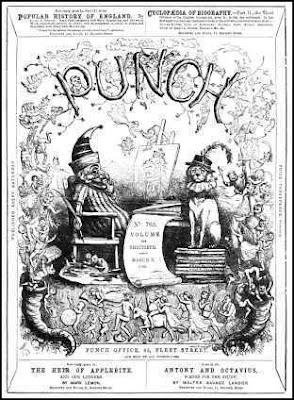 It's always nice to welcome a new site on the intertubes, full to overflowing though they might be, especially one dedicated to free content in a world where there are devious mutterings about charging end users for a bit of what they fancy.
But what's this?
The Punch is a new opinion website aimed at every Australian with a love of ideas, discussion and debate.

It’s not a fancy, la-di-dah site aimed at people with three university degrees, nor is it a site for yobbos who want to engage in mindless abuse.
Lordy, lordy, so I miss out on the basis of having too many university degrees, and I can't participate because of a yobbo taste for a bit of mindless abuse, in the Clockwork Orange style beloved of flamers and serial pests. You mean this is a club I can't be a member of because I disapprove of the membership?
And how is this new site going to work, in the end days when its stern master - good old Rupert - announced that people would have to pay? Why by presenting diverse opinions from its own small team and a rolling roster of almost 100 outside contributors, and by recycling News Ltd content, with 20 links a day to aggregated content.
It's like Crikey without the premium:
It’s a free site - you can sign up for a morning email to receive a free alert to the morning’s content on any weekday. If we ever did decide to charge a subscription, the fee would be reasonable, and would involve offering additional premium content, rather than blocking readers from accessing the existing site.
Dang, there goes the business model again - giving the basic model away for free and only charging for the Trucoat - but I suspect that like junkies, they're trawling for trade, and then like a heroin dealer, once they've got you hooked, you'll be on the needle for life. And as for those evil recyclers like Google, this new outreach arm of the News empire will only recycle with love:
Much of our content will be News Limited content. But it will also come from people at independent news sites, from people who aren’t in journalism but are great writers, from people at rival news organisations whose work on The Punch opens them, and us, up to new audiences. And every morning we will link through to content on sites which we own, but also on sites which we don’t own, to give you the most enjoyable reading experience.

So I guess they'll be linking to Crikey which will be linking to Huffington Post which will be linking to Salon which will be linking to Slate which will be linking to ... dang, does anybody actually generate content when you can link to your rivals for free in the interest of opening them up to new audiences, since old audiences are just too dumb to Google up things that might interest them.
But wait, I spoke too soon. This free distribution of free News Corp content, which will also provide free links to free content provided by others, is sending a message to the world, and especially to embittered academics:
Against this backdrop, our hope for the site is this: at a time when every tenured communications academic on the planet is sending tiny urls via twitter, linking you through to wrist-slashing stories about the apparent death of journalism, we want to demonstrate that journalism is alive and well.
Yep, that's the way you do it, journalism for nothing and your chicks for free. Yeah, that's the way you do it, maybe get a blister on your little finger, a blister on your thumb, you hit your keyboard and it all comes out, money for nothing and your chicks for free.
That's right you dumb academics with three degrees in your sheltered tenured workshop. Journos love to work on the smell of an oily rag - smells like rebellious teen spirit to me - because they just love to explore and write and research and harass and investigate for the sheer joy of changing society. If you pass one in the street, with a sign saying homeless mother of three, drop a few coins in the hat to keep them hard at it.
And there's one other bold, revolutionary approach which it will be interesting to see how long it will last.
One thing we ask - we strongly encourage readers to log on as themselves. We’re more interested in hearing from Ian Smith of Box Hill than Dingbat of Box Hill, as we suspect Ian might have something more interesting to say. We not only want to encourage a civil and illuminating standard of debate, we want to give every reader the opportunity to write for the site, under their own name.

Ah golly, well as a dingbat, I just can't see how I can sign in. And anyhoo, what's wrong with being a dingbat? What's wrong with an uncivil and unilluminating standard of debate? You mean if you publish Piers Akerman no one can call him a dingbat, and he can't call anyone an idiot? But that's the only reason Akerman exists. You wouldn't read him for anything else.
I'm sensing somewhere between tabloid and broadsheet, and let's hope it doesn't end up scones and a cup of tea with your maiden aunt, or eccentric uncle.
Good luck to the moderators in this valiant Star Trek endeavour. But to be fair, on the first outing, which had produced 32 comments at time of writing, there were a sprinkling of what sounded like real names amongst the usual first names, from notables like Caroline Overington, along with the usual eggheads, cabbies, NTBs and stormtroopers.

But of course it's also hoping for a lot of content generation by mug punters who assemble to air their views, since comments along with clicks are taken as the holy grail of intertubes activity - even if there are now so many spaces in which people can spill a pennyworth of views, a tuppence of bite back, that you could spend all day just commenting on the commentators.
Obviously enough, the site exists for you - the reader. Unless you ask us a question, we will keep our noses out of the limitless space we’ve provided for comments, and let you have your say.
Oh goody goody gumdrops. Another playground with limitless space even if the tubes are full to overflowing.
Well here's hoping they can generate a new standard in scribbling and in moderation, and that they manage to keep the loons under control. There's even a whiff of the original Punch in the title, which still remains one of my favorite ways to capture the whiff of Victorian England. But then they always had great cartoonists, and Crikey has First Dog on the Moon. I'm afraid if this new pinch of punch wants to attract churls like me they'd better get themselves a top notch trendy cartoonist. Visuals are all the go on the intertubes. Right now the layout's a bit ... flat and white.
I'm not sure that editor David Penberthy is adding anything to Rupert's plan to charge for content - aggregation of this kind is now a standard business model for advertising driven sites - but hey, it'll be fun to see how the big boys play in the world of blogs. And it'll be interesting to see if they can persuade people to stump up cash for what's so abundantly free it's like wandering through a digital overload of 'read this here, listen to me there'. A cornucopia of noise, mayhem, news and opinion on billions of pages.
I just wished Penberthy hadn't discriminated against posh braniacs with a few degrees, and juxtaposed them against mindless yobbos. Why think they're mutually exclusive? Why limit your audience to your maiden aunt?
You can catch a pinch of the punch and the launch prose here.
Posted by dorothy parker at 5:41 PM