The image above doesn't have anything to do with anything, but it's one of those nicely surreal moments you can stumble across in the full to overflowing intertubes, and it's a way to take the mind off the farce known as the tailgate utegate saga.
Everybody is already so over it, that it feels like a pork pie with dead horse, but all the same, it's worth harking back in time for a moment, if only to read Piers Akerman's Red herrings dragged over the really fishy business.
You see, Akerman, our much loved fat owl of the remove, is still maintaining the rage, like Billy Bunter down at the tuck shop demanding tuck. If not a jam tart, then certainly a kipper:
When clouds of smoke billow over schools of herring one can hope at least for a kipper at day’s end.
Not so in Parliament yesterday where the ALP released flurries of red herring and enough smoke to close Canberra airport in its attempts to shield Treasurer Wayne Swan from the utterly damning Senate committee evidence of his office’s involvement in Utegate.
On and on rants the fat owl, laden with fishy metaphors, berating the fishy stench and the exercise in smear and distraction (and no never mind just that one measly bogus email), and the hidden culture of cronyism and patronage.
And where Tim Blair saw Malcolm Turnbull looking like a state of origin player flattened by a coat hanger, Akerman remains hopeful the game will turn out okay:
Stripped of its obfuscation and persiflage, Labor looks rattled. The Labor benches sounded like a busload of losing league players returning from the pub. Rudd in particular looked uneasy because he knows that the greatest political crime a Member of Parliament can commit is to mislead the House.
And never forget the fish:
Forget false emails and protestations of threats to staffers, they don’t mean a thing. There’s no kippers here. The fishy stink flowing from this is over-powering, unedifying and unappetising.
But what's most amusing are the howls of pain as the fat owl flails away at his readership, at least the malcontents and dissidents.
Labor stooge, he yowls at one. Fool, he garoars at another. But the mail was shifting a little in tone, and not entirely buying the spin from the spinmeister, which after all did sound a little bit like the argument was rotting from the head down:
I am not one of your regular readers. Not only was your article the first thing you have written that I have read, my responses were the first I have ever made to anything I have read on the net.
I am now getting to the main point of this response: the quality of your replies/responses to comments made on your article do not approach the quality of the original article. Your replies/responses suggest you are an immature borish oaf who is unwilling to engage with the substance of comments made. You resort to name-calling too often in an attempt to support your case. I don’t know much about your background, but if this represents who you are, I shudder at the thought that anyone could take you seriously.
Once you dismissed me as feather-brained for challenging one aspect of your article, any respect/seriousness I had for you quickly disappeared.
Oh the poor nube, pwned by Piers. Fancy expecting a serious, mature debate on matters of substance on loon pond.
Fat chance. What he should do is what Mr. Clegg did to Billy Bunter:
Mr Clegg did not speak. He stepped towards Billy Bunter, and, to the fat Owl's great astonishment, grasped him by the back of the neck.

With a swing of his arm Mr. Clegg hooked Bunter to the doorway.

"I say, wharrer you up to?" he howled. "Gone mad? Leggo my neck, you cheeky old ass. Will you leggo?"

Mr. Clegg swung Bunter into the doorway, and then, as requested, he let go - pitching the astonished fat owl out of the shop!

Bunter spun.
And so Akerman spins, on and on, caught up in a web of eternal conspiracies and deep seated fishiness. Would that someone could find the time or the desire or the means to toss him out of the shop. And let us not speak of gates again.
(Below: oh okay if the kippers aren't working for you, how about a pie, guv'nor? Nothing like a porky pie or a fishy email to moisten the lips and whet the appetite.) 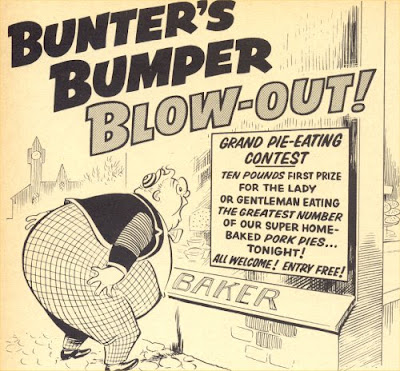 Posted by dorothy parker at 9:04 AM