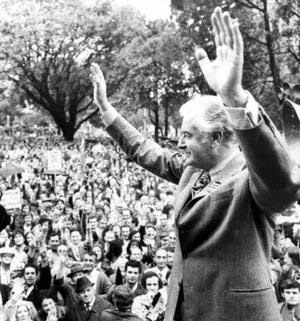 (Above: Gough Whitlam, the last ideologue).
Young Greg Melleuish is at it again, wondering loudly if the world and political life is in the grip of some fiendish Edgar Allen Poe pendulum, likely to lob us in the black pit of leftist thought, as he announces defiantly We will not be led Left.
Is there a natural rhythm to political life whereby countries move like a pendulum swinging from Left to Right and then Right to Left?

If such a view is correct, then after 25 years of the pendulum swinging rightwards we are now headed back the other way. The victories of Kevin Rudd in 2007 and Barack Obama in 2008 would seem to prove that this is the case. Indeed, according to Nick Dyrenfurth ("Follow Deakin and Menzies on the path to pragmatism", Opinion, June 1) the entire Western world is now marching leftwards to this beat.

Golly, it sounds grim, the entire politics of life conducted like a metronome's beat, with the hand swinging wildly to the left, meaning we hear a lot from the squawky first violins, but not from the solid conservative cellos and double basses.
Ah, but having set up the straw man, there's a chance to demolish this leftist talk of a swing to the left. After all, Europe has stayed solidly right, the British Labor government is doomed, and even plucky New Zealand joined brave India in a swing to the right.
Do just Kevin and Barack really constitute a leftwards surge?

And does anyone outside the self defining self embracing worlds of left and right wing ideology care?
But how to tackle the thought that Comrade Chairman Rudd might represent a dangerous leftish tendency, as the likes of an undoubtedly confused Piers Akerman contends. Well first of all, it's handy to be able to paint him as John Howard lite, or John Howard whatever:
A Labor Government headed by Rudd was elected in late 2007 because he appeared to be safe and conservative to the Australian electorate. He was a Christian, portrayed himself as an economic conservative and promised to keep the valuable aspects of the Howard years and to discard those, such as Work Choices, that were regarded a bridge too far for the Australian people.

Rudd won because he seemed to be an improved version of Howard, younger and more caring.
Phew, safe and conservative and Christian. Nothing to startle the horses there. We got rid of John Howard, so we could keep John Howard (except for Work Choices).
Yes, it seems even if the conservatives lose, the conservatives win. Conservatives are always in power. But what about comrade Rudd's treacherous pinko perverted article for The Monthly? Surely that proves Akerman's right, that we have a deviant in charge.
Not so, sings the soothing siren Melleuish.
... the world changed as the financial crisis struck in 2008. Rudd had to do something. What he did was to embark on a series of policies that involved both a considerable amount of spending and an increasing concentration of power in Government hands.

This was portrayed as Rudd re-discovering his social democratic roots but it could also be described as an instinctive reaction to an economic downturn. The Government had to do something. When in trouble, appear to be in control and spend has been Rudd's answer.
See it wasn't ideology at work at all. Now listen up Akerman, because your constant venting and spleening about conservative Rudd and his fiscal extravagance is clearly misguided.

Rudd is just a decent conservative Christian, given to a little spending at Christmas time to help us through the gloom and make sure we still believe in Santa. But if he's safe enough, what about the ordinary folk? The common mug punters? Have they been showing dangerous leftist tendencies? Should we order up a huge batch of vaccine to stop leftist tendencies spreading like a bout of swine flu?
In the present situation, is it the case that the Australian people have followed Rudd as he ascends leftwards towards the Light on the Hill? It is difficult to know exactly what the Australian people have made of the dramatic events of the past 12 months. Most certainly the intelligentsia has interpreted what has happened to mean that Australians have forsaken the evils of economic rationalism for a belief in "government knows best".
Phew, that's a relief. After all, decent Aussies don't have an ideological bone in their sweet non political bodies. Let's not worry about the intelligentsia, you know, those pious academics who spend their spare time writing articles for newspapers, let's examine the kidneys and liver of the average dinkum Joe:
One suspects the Australian people generally have been caught up in the drama of the past 12 months and regard much that has happened with puzzlement and wonder. Some have been badly hurt by the mauling their superannuation funds have taken, others have been very appreciative that there has been a rapid decline in interest rates. Others appreciated the $900 payout.

There simply has not been enough time to discern what the effect of the present situation will beon the political outlook of ordinary Australians.

Rudd being in his first term has complicated matters. Australians have not yet really got the measure of the man. He has not helped by being a chameleon; he appears to change so easily that it is difficult to know for what he stands. But Australians are generally happy to give someone the benefit of the doubt. After all, they re-elected Gough Whitlam in 1974.

Phew, that's a triple barreled relief. Flip the mugs a bit of cash, lower the interest rate, act like a chameleon and all's well in the lucky country. Sure, the runes aren't entirely clear, the Delphic oracle a little opaque, the signs and portents a bit like a bad Tarot card hand, but it seems Aussies are just fair go dummies. Bowl an over or two, and don't get hit for six, and you can hold up one end. After all, they allowed Gough Whitlam a second innings.
But what of Gough, wasn't he a dangerous surge towards anarchy?
Today, however, one has to be over 50 to remember the horrors of 1974 and, in any case, the intelligentsia has sugar-coated that period as one of "social progress".

Damn you intelligentsia, damn you all to hell. As if Gough Whitlam was any kind of progress, with free university education and a free opportunity to return from the war in Vietnam alive, instead of being conscripted by the marble to go die for your country in a stupid war with no practical purpose, or as it turned out useful outcome for either Vietnam, Cambodia or the United States.
Call that social progress? Meh, when we were so much better off with that heavyweight thinker Billy McMahon, not to mention on the job died with his pants down Billy Sneddon. Ah what glorious years of social progress the Liberal party supervised in the nineteen sixties.
But I guess none of this clarifies chameleon Rudd, or the likes of Piers Akerman strangely, hysterically, insisting that Rudd's a pink deviant satanist taking us to bankruptcy and ruin.
So let's get rid of the notion of right and left altogether. When the left is in power we can label them as conservative pragmatists, and when the right gets into power ... why, they're clearly conservative pragmatists.
The real problem might be in interpreting events in ideological terms. In 1983, the Hawke government de-regulated the economy because it believed it was the necessary thing to do, not because it was full of gung-ho economic rationalists. In 2008 and 2009 the Rudd Government has taken a number of steps, including the stimulus package, because, reacting to events, it saw itself as driven by necessity to do something.

The ideological gloss often comes after the event, not as the motor driving it. Both Hawke and Rudd took the steps they took because they were concerned with social democratic outcomes. It will be the task of some future historian to judge which of the two paths chosen actually achieved its goal.
Yep, peas in a pod really. Hawke fixing up the economy one way, and Rudd's trying to fix it up by another, but both only concerned with social democratic outcomes. And what's wrong with that, since John Howard was a keen social democrat, especially for the well to do.
Yep, all a bunch of pragmatists doing what had to be done while in the grip of circumstances and history. Necessity, not ideology, is the go. Why it's the next best thing to having John Howard in power.
So there you have it. You might think you've just eaten an intellectual doughnut, scoffed down a bit of showground fairy floss, bitten deep into a tasty marshmallow of meandering platitudes.
Not so. Next time you have to endure a rant from Piers Akerman about how Kevin Rudd is the most evil, hopeless, reckless, dangerous ideologue in recent Australian history, you can advise him in grand terms that he is wrong.
Ideology is dead. The light on the hill is officially extinguished. We are all pragmatists, and Australia will always be led by Christian Conservatives, no matter what they might write in The Monthly.
The intelligentsia has spoken, and so Greg Melleuish has written, and so it has come to pass, and will be so for ever more ...
Phew that's a relief. Next week following the death of ideology ... the death of politics. And the week after that ... the death of political commentary. Henceforth all commentariat columnists shall, by decree, become pragmatists ... just like comrade Rudd.
Posted by dorothy parker at 8:03 AM