Tim Blair, Kevin Rudd, the Chaser lads, and nuking the fridge in spleensville 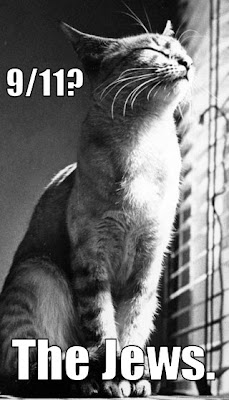 (Above: Tim Blair's humor at work?  Blair: Lolcats are so yesterday. Hail trollcats, including this delightful conspiracy kitty  - see Cataan).
Delightful conspiracy kitty? Um, is that because it really nails the Jews as being responsible for 9/11, or really nails the guys who think the Jews are responsible for 9/11? Or because it really nails Tim Blair's adolescent idea of what's fun?
Who knows, but I think I might cross post it to Storm Front. Why should Daily Telegraph readers be the only ones to have all the fun chortling about the zany Jews and their cute cats.

Meantime, dearie me, how Tim Blair hates the Chaser lads (it's usually Chaser boys but I prefer the notion of stout privileged North Shore lads), as he piles in with Twisted take on sick kids.
And has the Chaser skit on dying kids making an economically neo rational and neo realistic wish (as opposed to a leftie pie in the sky Santa Claus type wish) given him the perfect opportunity to hang out the washing and plunge in the knife, right up to the hilt, and with a twist or two, in preferred seppuku style. (In fact the Daily Terror is having endless fun sobbing into their beers begging Helen Lovejoy style for someone just to think about the children, the sick children).
Now you might write it off to professional jealousy - the Chaser lads are intermittently funny, while Blair should never give up his day job if he's thinking about a career in television comedy. Whenever he attempts to be funny in his column, it's like getting hit in the face with a rather large haddock in some kind of perverted Monty Python dance sketch.
Deep beneath the Blair rage, there seem to be some serious issues which require some kind of therapy, though the sensitivities of right wingers ever willing to make sarcastic remarks and acerbic asides in a splenetic way are sometimes hard to understand - at least when they're confronted with comedians stretching comedy in ways they don't like.
How's this for a tortured exchange with Andrew Denton, whom Blair drags into his column's conversation because Denton was there at the start of The Chaser.
The sensitivities of ABC types are sometimes difficult to understand. Former Enough Rope interviewer Andrew Denton - who helped launch The Chaser on television and whom the team regards as a "fairy godfather" - once told me that an item I'd written some time earlier about the late Palestinian activist Edward Said was simply "unforgiveable".

Puzzled, I had to search online to find the item that had upset him so. Here it is, in its entirety: "Of all the millions of words that have been written to mark the passing of philosopher, leftist, author, intellectual and Palestinian activist Edward Said, it's fair to say that I haven't read any of them."

Hey, it's no dying kid sketch but it's hardly anything a normal person would even remember, let alone whine about.
Ah those abnormal ABC types. Hey a guy died, I hated his guts, and now he's dead. And I danced on his grave. Metaphysically that is. Meh. It's not like I physically danced on his grave. Or Susan Sontag's for that matter. Where's your sense of humor? Whiners, whingers, losers, do gooders, and consumers of ABC tax dollars.
Now let's get back to bashing the Chaser lads.
And there the memories and the bitterness, the spleensville, runs deep and sour and lemon peel:
Surprisingly, for comics who declare "war on everything", there are some issues on which The Chaser crew themselves take deep offence.

Anti-war demonstrators, for example. In 2003, The Chaser - in its now-dead print edition - threw a hissy fit over then-prime minister John Howard's treatment of peace marchers.

All Howard did was ignore them. This caused The Chaser lads to lose their collective sense of humour. Outraged, they published Howard's private telephone number.

"People have suggested that what we did was an invasion of the prime minister's privacy," The Chaser founding member Charles Firth squealed. "We strongly believe an invasion of Iraq is a bigger invasion of people's privacy."

Oh, the moral shame of it all. It's almost as though PM Howard had, I don't know, made fun of sick and dying kids or something.

When it's so much more fun to bomb the shit out of them. Oh the fun of a good war. Ah now I get it, you can't make jokes out of sick kids, but killing them off with weapons in a war situation so they can't grow up and thereby fail to enjoy the democracy that's trying to be thrust upon them is just a jolly jape amongst chums.
But let's end with an indication of where Blair's sense of humor lies. He happily fills up his column with fodder about jumping the shark, but strangely forgets to mention nuking the fridge. Instead he settles for this:
The line comes from a Happy Days episode in which Fonzie, yes, jumps over a shark. On water skis. While wearing his motorcycle jacket. Thanks to The Chaser and that reader, there's now an Australian shark-jump equivalent. When a local show begins to tank, we may now refer to it as having "flown the Vatican".
But sad to say, when you get to a third generation rip of a joke, the quality begins to suffer like an mp3 running at 64kbps. It'd be like talking about Blair spleening the Murdoch or joking about golden armed Edward Said as a champion outfielder in rock throwing.
Never mind, Blair's had his chance to indulge in a little therapy - well you'd hardly say calling the sketch "appalling ... visceral, witless tastelessness" a restrained critique - but The Chaser lads should know now that when Tim Blair and Kevin Rudd can agree in such a resounding fashion, their days are certainly numbered.
That's right, Blair and dear leader Chairman Rudd are of like minds. Next you'll be telling me that they're of like senses of humor. Will wonders never cease. As those old SBS ads used to say, the world is truly a wonderful place.
Meantime, the Chaser lads should start thinking about alternate careers. The howls of the wolves grow closer, the jackals can smell the sweet smell of flesh and payback, and the carcass of one Minister won't slake their hunger. So it ever was in comedy, and so it always will be. If you can't make the class laugh, the bullies take you round the back and beat the shit out of you ...
(By the way, if you want a different take than Blair offering himself up as a kind of sanctimonious pious St Kev on valium, give Di Butler at The Punch a go, with Thanks Kev and ACA, but I'll decide if I'm disgusted).
(Below: the good old days. The Chaser lads offering Chairman Rudd a stripper. Or giving a bunny the bunny). 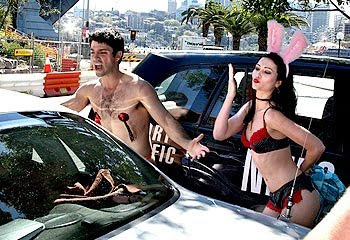