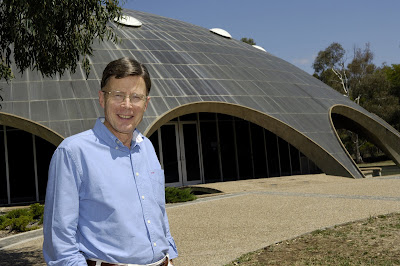 (Above: Professor Kurt Lambeck, president of the Australian Academy of Science at the time of his appointment to the job in 2006, standing in front of the Academy's shine dome in Canberra).
The heat's gone out of the discussion of Ian Plimer's book Heaven and Earth: Global Warming: The Missing Science.
The tabloid caravan of hysterical commentariat columnists has moved on, having sowed as much doubt and confusion as time and intelligence permits. There are so many other people to beat up, that concern for the planet and deluded gaia worshippers must at best be intermittent.
After all, the likes of Miranda the Devine is as sure to get upset about Susan Boyle, plastic brains, the overflowing intertubes, lads and ladettes, and the Chaser lads, as she is to keep studying the science of climate change.
Of course I'm leaving that gadfly Tim Blair out of the equation because he's relentless in his running set of jokes and asides on the warminstas, which constitute a theory of climate science in much the same way as the jokes in the Marx Brothers movies amount to a work of political science as long and as detailed as Das Capital.
Which is why you might well not have heard or known about Professor Kurt Lambeck's review of Plimer's book, which turned up on Ockham's Razor this quiet holiday weekend in Australia.
Now this - sob - outs me as a Radio National listener, and I have to confess there's something about a man wearing a cardigan or leather patches on the elbows which is strangely, disturbingly arousing. Or it could just mean I like a bit of intelligence with my breakfast cereal rather than a dingbat like Alan Jones.
Whatever, you can catch a transcript of Professor Kurt Lambeck's quietly spoken review here.
Also on the same page you'll find a listen now button which means I don't have to be fagged putting it up on this page.
Lambeck's review is short and succinct - and sharp - and in the end he poses a set of questions I've yet to hear answered by any of Plimer's supporters:
For us, the questions are: can 9-billion people in 2050 survive if there is a global disruption of our climate during this century? Do the costs of such disruption exceed the short-term costs of implementing technologies and practices that lead to a stabilisation of greenhouse gas emissions? How can the technologies and changes in lifestyle be implemented without causing their own disruptions?

And you know not once did he talk in a way that evoked quasi religious quests or even mentioned Stalinist show trials. Now that the fog of tabloid war about Plimer has drifted away, why not take a dip and listen to Lambeck? You might have only your prejudices to lose ...

Posted by dorothy parker at 9:42 AM