Piers Akerman, a BBQ led recovery, pork, credit cards, flapping shade cloths and the end of the world is nigh sayeth the preacher 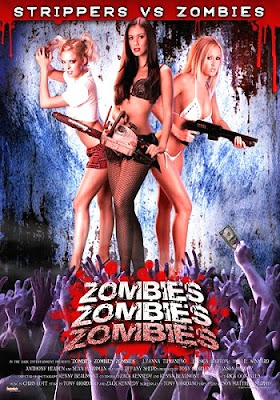 (Above: valiant young gen z'ers battling Rudd zombies intent on chloroforming the nation, proving yet again Emma Tom's right that strippers are agents for dynamic social change and good governance).
It must be lonely, being a figure in the wilderness, crying out day after day at the damnation and ruin that humanity faces.
But someone's got to do it, and who better than that Jeremiah, broken hearted prophet and bible quoter Piers Akerman. Of course the best, the humdinger, the A bomb of apocalyptic visions was delivered a long time ago:
The words of the Preacher, the son of David, king in Jerusalem.
Vanity of vanities, saith the Preacher, vanity of vanities; all is vanity.
What profit hath a man of all his labor which he taketh under the sun? One generation passeth away, and another generation cometh: but the earth abideth for ever. The sun also ariseth, and the sun goeth down, and hasteth to his place where he arose ...
... All things are full of labor; man cannot utter it: the eye is not satisfied with seeing, nor the ear filled with hearing.
The thing that hath been, it is that which shall be; and that which is done is that which shall be done: and there is no new thing under the sun.
Is there any thing whereof it may be said, See, this is new? it hath been already of old time, which was before us.
There is no remembrance of former things; neither shall there be any remembrance of things that are to come with those that shall come after.
Now let's see how Piers competes. What have you got to offer Piers in the championship - in BBQ led recovery and PM provides the pork - remembering we already know that the crooked cannot be made straight, and that which is wanting cannot be numbered:
Rudd is buying drinks for all on the national credit card but at the end of the day we will be stuck with his bill.
Um, okay, I'll go with that. Nice enough opener, even if you use it as a closer. But can we get a little bit of meat on the bones, a bit more hellfire and damnation. Something really punchy:
All we will have when we look back in future years on Rudd’s extraordinarily high popularity figures will be flapping shade cloths, a mounting debt and no marked increase in productivity to show for the oceans of red ink flowing through the once sound national accounts.

Good, that's getting better, flapping shade cloth, a bit like clothes on a Hill's hoist, oceans of red ink, like crustaceans in acid seawater, but how about something more like a time to live and a time to go broke and a time to vote Labor and a time to end up in a sea of sinking red hell for all eternity:
The problem is the Rudd Government’s bounty is exactly like those "free gifts’’ offered on late-night television, along with sex-enhancing pharmaceuticals and miraculous vacuum cleaners.
Ah yes, sex-enhancing pharmaceuticals. That's good, the bible and sex and damnation and eternal life in hell always go together like a horse and carriage.
But what about a plague of locusts? We always expect some kind of national disaster:
The Rudd Government has successfully chloroformed the electorate into believing that its spending has saved the nation.
Chloroformed the nation! We're all a tribe of sleep walking zombies, chloroformed into submissive passivity. And how have the Rudd-ites  managed this, presumably without having either to pass around masks or hit us up with needles? Oh no, the deviants are spending money on community infrastructure:
In NSW alone, more than $79 million is being spent on community infrastructure, which the ALP mocked as pork barrelling when in opposition.

The money is being spent on upgrading cycle paths, shade structures, soft-fall areas, curved pergolas, seating near a community wood-fired oven, new airconditioning, community centre renovations, kitchen facilities, barbecues, street furniture, social rooms, carparks, gym equipment, tennis courts, swimming pools, cricket pitches, picnic tables, skate parks, interpretative signage, kiosks and canteen facilities.
Damn you Ruddsters, damn you for your deviant deceptive community follies, as if having a cricket pitch amounts to a snowball in hell when we're all going to die, or at least live in abject poverty. Remind me how it goes Ecclesiastes:
Behold that which I have seen: it is good and comely for one to eat and to drink, and to enjoy the good of all his labor that he taketh under the sun all the days of his life, which God giveth him: for it is his portion.
Huh? That doesn't sound right. That sounds quite jolly, like it's okay to have a barbeque and a bit of pork and a game of cricket and a nice kitchen facility for the women folk so they can cook scones to go with the pork. Damn you Ecclesiastes, get it right:
And moreover I saw under the sun the place of judgment, that wickedness was there; and the place of righteousness, that iniquity was there. I said in mine heart, God shall judge the righteous and the wicked: for there is a time there for every purpose and for every work.
I said in mine heart concerning the estate of the sons of men, that God might manifest them, and that they might see that they themselves are beasts. For that which befalleth the sons of men befalleth beasts; even one thing befalleth them: as the one dieth, so dieth the other; yea, they have all one breath; so that a man hath no preeminence above a beast: for all is vanity.

All go unto one place; all are of the dust, and all turn to dust again.
That's better. Dust unto dust, all is vanity, debacle after debacle, the end of the world is nigh, and before that we're all doomed, and Rudd will bring down this mountain of debt on our chloroformed heads like a sex-enhancing pharmaceutical, but don't expect any suction from those so called miraculous vacuum cleaners flapping in the breeze.
And in particular you carefree, careless chloroformed younger folk, of the lower alphabet (yes you, you gay x'ers and y'ers and z'ers) you'll be yoked to the beast of burden and be made to work forever in the Sisyphean task of paying off the national debt. As well as your own carefree use of your personal credit cards. Have we taught you nothing about abstinence and toil, like Scottish crofters carving a living from the barren soil?
Trust a baby boomer like Akerman announcing the curtailing and ending of your days? Sure thing.
Oh and if  only I believed in climate change, in a quasi religious zealous way, I could note that also you'll be swept away by the rising seas, and choke on the rising smog of carbon and be struck by an asteroid that'll wipe out the world with the strength of a thousand nuclear weapons. If the Taliban don't get you first as you try to shelter under flapping shade cloths.
Phew, that felt good. This hell and damnation stuff is fun. Reminds me of the ancient wisdom taught to me by my mammy:
For want of a nail the shoe was lost.
For want of a shoe the horse was lost.
For want of a horse the rider was lost.
For want of a rider the battle was lost.
For want of a battle the kingdom was lost.
And all for the want of a horseshoe nail.
Well don't go asking the Rudd government for it. Because, as you now know, idle spending on community projects is expensive, and horseshoe nails are damned expensive, and will burden future generations with insufferable debt. So bugger off and use a stocking and some barbed wire and see if you can fix it that way. And if not, get lost.
Here endeth the lesson. But remember the fiendish chloroforming zombies are lurking even in the stratosphere, which is way more likely an explanation than global warming: 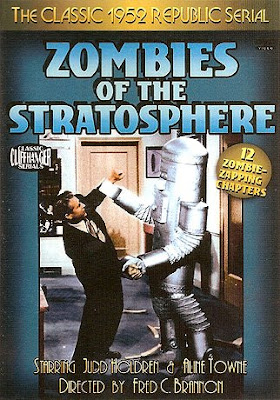