Piers Akerman, Confucian Kevin, the vile Rudd, and a question for the uninsured 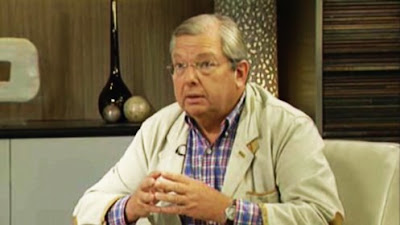 (Above: a prayerful Piers Akerman, consternated about the question of home insurers who do the right thing, and bludgers who don't).
Shock, horror, consternation.
In a totally unexpected development, it was today reported that Piers Akerman, esteemed columnist for the Daily (and of course Sunday) Terror, had written a column denigrating the performance of Kevin Rudd as PM of Australia. The singular column was headed PM denies flood victims a fair shake.
Correction.
It was incorrectly reported today that Piers Akerman had written an unprecedented attack on Chairman Rudd, when it is estimated that - with the Rudd government elected on 4th December 2006 - Akerman is now approaching his five hundredth column attacking Chairman Rudd, allowing and adjusting for one column once in a blue moon on the subject of the evils of Chairman Obama, and a once in a leap year attack on Chairman Rees, though also acknowleding Akerman's heroic efforts to lambast all three in any one column.
When asked to comment on his heroic effort - comrade Akerman is hoping to complete one thousand columns on the evils of chairman Rudd by the end of 2009 - he modestly shrugged it off, but did thank Chairman Murdoch for his enthusiastic support.
Running a marathon is easy, said comrade Akerman, up against the task of cataloguing the diabolical evils of the Rudd government. People regularly fail to understand that announcing the end of the world within a week is extremely exhausting and spiritually draining, especially when done week after week for years on end.
Now how has comrade Akerman opened his spirited pawn sacrifice in this latest round of chess?
Kevin Rudd may be able to quote Confucius in Mandarin and speak bureaucratese with Canberra’s finest, but he can’t do ocker to save himself.

Not that the people on the NSW North Coast could give a flying fig for the Prime Minister’s linguistic abilities.

They would settle for a simple sample of honest speech from this master of spin, not more weasel words from the king of con.
Mmm, not bad, not bad at all. King of con. Flying fig. The judges are awarding those linguistic flourishes an eight. What a pity the degree of difficulty was 1.5.
But can the fat owl keep the figures of speech flying?
To use the PM’s mangled strine, fair shake of the sauce bottle, Kev ...
... to suggest the locals are cheesed off is undercooking the anger they feel, particularly the elderly and less well-off Labor voters who feel betrayed by Kevin ‘07 ...
... There are plenty of Australian colloquialisms for people who let down their mates, who say one thing and do another, most unfit to print in a family newspaper.

If Rudd wants to brush up on his slang he could find plenty of people around Coffs right now who are prepared to give him a lesson and they wouldn’t charge an Oxford scholar.
Well played Akerman. A TKO in the tenth round, and a huge round of applause for yet another stage in the marathon of abuse, reminiscent if nothing else of the marathon dances featured in They Shoot Horses, Don't They?
When asked if he could sustain this pace, and whether he thought he was sounding monomaniacal, or like a stalker, or perhaps even like the ice pick wielding Sharon Stone in Basic Instinct, the always modest Akerman had a ready retort. While refusing to sit in a chair in a way that might create an impression he was impersonating Ms Stone, Akerman said:
I must admit there are other topics which I would like to explore but Rudd is a dangerous person and a threat to the nation.
When chivvied by another wretch, who suggested that Piers and his readers were like a bunch of parrots indulging in an anti-Kev meme for the week, as predictable as it was witless, Akerman had a handsome rebuttal to hand:
... don’t ask me what Kev will do next - you voted for the clown. So who’s witless?
By the way, the actual Akerman story concerns flood victims in the North Coast of NSW and the Federal government's tardy response to assorted claims, and the suggestion that they've been shut out in the cold because they don't live in a government-held seat.
What a pity Akerman is now their spokesperson. You see, I reckon it's about time for him to do a spewing spray about people wanting to live off the government teat, and suck dry the welfare dollars provided by taxpayers sucked dry by the Rudd government plunging the country into deficit ruin, not to mention losers who have a false sense of privilege and entitlement, especially that bunch of malingerers who neglected to take out insurance as they should have. Against fire, flood, famine, whatever.
Oh sure, you might be a dirt poor pensioner, but won't someone think of the equity and the prudent hard workers and self funded retirees who do the right thing.
It's a very interesting thing Barry er because approximately fifty per cent according to the Insurance Council of those who lost their homes in the recent Black Saturday fires were uninsured. Now the question is whether those who are insured should be compensated along with those who are uninsured from the money raised in the Bushfire appeal ... Well clearly there's an obvious question of equity here. If you were prudent and you insured your place, erm, does this give you the right to access those monies along with those who were uninsured or do those who were uninsured have greater rights than you. And of course there is also both in Victoria and New South Wales  a bushfire levy which is paid and which supports both the voluntary and the permanent fire fighting units. I think this is a real can of worms.
... Well that's right everybody wants you know a clear humanitarian approach to those who are absolutely destitute but do those who took the right steps perhaps, should they be punished? And this goes back, you know it's like self funded retirees. So I think that the Victorian government's got a huge problem on its hands. (Insiders, broadcast 01/03/09)
Janet Albrechtsen was, naturally in that pugnacious Dame Slap way we love, a lot more forthright in Stop bailing out the irresponsible:
Someone had to say it. The Insurance Council of Australia has bravely come forward to make the obvious and rational point amidst the emotional brew of the Victorian bushfires. The ICA is advocating mandatory home and contents insurance for those who live in bush-fire prone areas. The critics will say a bunch of insurers would say that, wouldn’t they? They are looking for more business, right?

Of course, they are. But that does not detract from the logic of their central point. Indeed, more of us need to point out the illogical outcomes that flow when we encourage people not to insure their homes. “Why would you pay insurance premiums for 15 years when you know the bloke next door (without insurance) is going to get his home rebuilt to the same standard or higher?” ICA spokesman Paul Giles said. “We have compulsory third-party personal insurance for motor vehicles and you have to wonder why we are not having this discussion.”

It is tempting to dole out taxpayer dollars payouts to those hit by brutal fires. Images of people who have lost their homes are powerful. Yet, it makes no sense to encourage people to look to government for help when things go wrong rather than take responsibility by insuring their homes.
Or those hit by brutal floods?
Well of course living in a flood prone area isn't the same as living in a fire prone area. And people failing to take out insurance can be seen one week as irresponsible bludgers who've taken the path of irresponsibility, knowing that others will bail them out, and the next week as a sad, bad luck story which serves to damn the Rudd government because George Bush like, it can't get its shit together about its own North Coast New Orleans.
But if you're part of the Albrechtsen push, it seems the government would be unwise to encourage people to take the uninsured path, or look to the government for help when they should look to the private sector insurance companies. That is not heartless. That is common sense, a commodity often in scarce supply when you entrust governments to spend your money wisely and fairly.
Dang it, when will I get this commentariat columnist thingie right. One minute the Rudd government should be heartless, the next minute it is heartless and lacking in ethics.
One minute Rudd is mean and tricky with his words, the next minute the commentariat is mean and tricky with their words.
Pity the poor mugs caught in the middle. Oh wait, that's me. Better go check that house insurance policy, just in case this is a week for Akerman to punish the poor for voting in that Mandarin speaking Manchurian candidate ...
After all, it is your fault you dingbats, and all Piers can do is shriek "Nevermore", week after week after year after year ...
`Be that word our sign of parting, bird or fiend!' I shrieked upstarting -
`Get thee back into the tempest and the Night's Plutonian shore!
Leave no black plume as a token of that lie thy soul hath spoken!
Leave my loneliness unbroken! - quit the bust above my door!
Take thy beak from out my heart, and take thy form from off my door!'
Quoth the raven, `Nevermore.'

And the raven, never flitting, still is sitting, still is sitting
On the pallid bust of Pallas just above my chamber door;
And his eyes have all the seeming of a demon's that is dreaming,
And the lamp-light o'er him streaming throws his shadow on the floor;
And my soul from out that shadow that lies floating on the floor
Shall be lifted - nevermore!
Posted by dorothy parker at 8:32 PM