Greg Melleuish, devious baby boomers, the joys of Victorianism, the evils of post modernist spin meisters and an astrological approach to history 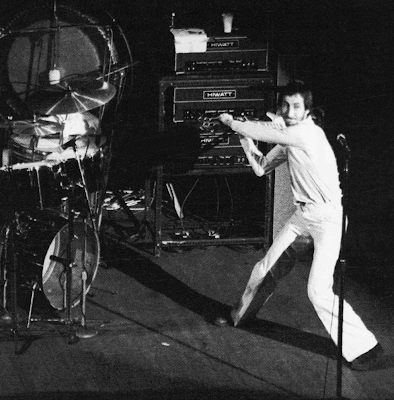 (Above: if a World War Two baby will do this to a guitar, imagine what a baby boomer would do to it).
You can always rely on Greg Melleuish to provide eccentric reading, but his latest outing is both eccentric and pointless.
Actually wolves howling at the moon make more sense, but you might have fun reading Talking about my generation of leaders.
For a start, note the clever header, which references Pete Townshend's song My Generation. Now pay careful attention. Townshend, born in May 1945, was amongst the last of the WW11 babies, before the dreaded baby boomers started to pop out and ruin the world. You should also note that Roger Daltrey was born in March 1944, John Entwistle was born in October 1944, and Keith Moon was born in August 1946, a baby boomer. What does it all mean?
Nothing right? Well no, according to Melleuish it signifies everything. Because as an historian Melleuish is something of an astrologer. Birth dates have tremendous social, political and cultural implications - for a start, you can see now that Keith Moon was a baby boomer, which no doubt led to him doing so many drugs and women, and being a tremendously disruptive influence on the band. Him being a raucous drummer had nothing to do with it. He was a baby boomer.
I've jumped the shark, nuked the fridge right? Well no, I've just Melleuished a rock band, in the way he Melleuishes history:
There is a tendency in Australia to think in terms of generations when explaining the values and behaviour of a particular time. One can see this in the constant reference to the baby boomers, generations X and Y, even to the extent that a quiz show pits members of these various generations against each other.

It is not common for the political leadership of the country to be discussed in generational terms, even though the elevation of Kevin Rudd to the prime ministership was a major shift from one generation to the next.

This is despite the fact that Rudd is the first baby boomer prime minister of Australia, some 10 years after the elections of Tony Blair in Britain and Bill Clinton inAmerica.
Actually there's a tendency in my Woman's Day astrological charts not to discuss politicians or history at all, so I'll spare you the breakdown of the birth dates of the Australian PM's as charted by Melleuish, but be assured he relentlessly charts the birthdays of our fearless leaders.
Now you might say, that is all very interesting but does it have any real implications for understanding Australian politics?

It can be argued that the fact that Australia was led by men of the late 19thcentury for more than 40 years may well have helped to keep Australia in a fairly conservative, could we even say Victorian, mould.
Well we could say that, we could even argue that, if we were blithering idiots and believed in the 'great men determine history' mode of analysis, which hasn't got much of an outing since that silly Calvinist Thomas Carlyle carried on about hero worship.
The two Depression babies Hawke and Fraser grew to manhood in the years of hope following World War II, and both studied outside Australia.

This probably explains why, as academic James Curran has argued, they had a form of Australian nationalism that was tempered by a generous internationalism.
Well I suppose you could argue that Fraser losing his trousers in Memphis showed an interest in international events, and Bob Hawke was an internationalist for picking up a beer drinking record while a Rhodes scholar at Oxford. It'd be a funny sort of argument, but Melleuish isn't done with funny arguments:
Both Keating and Howard were products of an Australia that changed from being traditionalist in the 1950s to a much more dynamic place by the late 60s.

They were both more intensely nationalist than were Hawke and Fraser, more inclined to focus on little Australia.

But as the last products of a fairly traditional educational system, they both possessed a no-nonsense set of principles. One knew for what both men stood. Whether one agreed or disagreed with them, the tag "man of principle" could be applied to Howard and Keating.
Lordy, lordy, so Keating blathering on about Asia and his love of French clocks and Mahler was just a cunning disguise for intense parochialism, while the man of steel, George Bush's favorite pet, the man who kept the US alliance flame alive, the man who took Australia into not just one war in another country, but two, was more inclined to focus on little Australia? I look forward to John Howard's riposte, should he be bothered.
But wait, here's the bonus set of baby boomer steak knives. You knew it was coming, so enjoy:
This brings us to the boomers, the products of the 60s and its education revolution. We now have a prime minister and an opposition leader who are both boomers. So what is the significance of the belated rise to prominence of this generation?

The one thing that was often associated with Blair was spin. The thing that appears to obsess Rudd is management of the media cycle and ensuring that news about the PM is always good news.

Could it be that the transition to baby boomer leadership means that we have moved from an era of principle to one of appearances?
Blair=baby boomer = spin = comrade Rudd = spin = baby boomer = appearance - principle = Fisher and Paykel washing machine and dryer. QED. Curse you, vain spin dry baby boomers.
Of course the one thing I never associated with Bob Hawke was spin - every bum should get a holiday if they think that's a sensible assessment of the man - while I've always thought of baby boomers, collectively and singularly as shallow, deceptive, misleading, guileful, and untrustworthy. Everything about the last fifty years has revolved around appearances rather than the solid earth. I mean take the flappers and gangsters in the twenties by way of contrast - were they dedicated to principle or what.
And I personally can think of no better example of a devious baby boomer than that mean, shifty Kevin Rudd, and nor it seems can Greg Melleuish:
Rudd has been many things in the few years since he entered the public spotlight. He has been a good Christian, a fiscal conservative, a good bloke and a social-democratic true believer. He has the capacity to shed his skin and acquire a new one as circumstances change.

What a snake, and not just your common friendly python, but a veritable death adder with his tricky ways. Beware this baby boomer he has a poisonous bite, and is inclined to offer apples to young impressionable women who mistake him for a good Christian and true believer. From paradise to hell in a flash.
This emphasis on image and appearance may suggest that Rudd is Australia's first postmodern Prime Minister. In a little over 40 years Australia has moved from a conservative Victorianism to a world in which nothing is as it seems.

That's right, Australia was a conservative Victorian country (even outside Victoria) right up to, um let's see, let's do the maths, 2009-40 = 1969. Give or take a year or Germaine Greer or two.
Now children look into the mirror. What do you see? Remember nothing is as it seems.
Eek, it's a boogeyman. Worse, it's comrade Rudd, and he's a post modernist, and he's led us into a post existential crisis.
Sure Shakespeare might have written 'nothing is but what is not' way back when he was penning Macbeth, and sure existentialism was first developed as a formally named conceit by the French during the war years, but baby boomer Rudd is at the head of the charge to change us from conservative Victorians to Sartreans smoking Gaullois and looking at impenetrable abstract art. Or worse. Jean Baudrillard. Or Lyotard or Derrida. Or gasp Foucault. The fiend.

Thank the lord this nightmare can't last:
The reign of the baby boomers in Australia may only be short, perhaps as short as the time from Holt to Whitlam. But if their gift to the country is that of postmodern leadership, then their potential to damage the country may exceed what happened during those 10 years.

Oh look the sky is falling in. I guess post modernism is just the great depression and two world wars rolled into one. Never mind.
One does not know whether to look forward to the generation that replaces the baby boomers with hope or trepidation.
Just as one never knows whether to look forward with hope or trepidation to the next column by Greg Melleuish.
But here's a thought for Mr. Melleuish. Instead of blathering on in a post modernist way attempting to dress up personal prejudices and opinions with a many colored coat of borrowed thoughts and astrological niceties, why not say something like this next time:
Gee I hate baby boomers. Golly I think that slippery Rudd is a spin meister. Hey he's ruining the country. Isn't post modernism stupid? Gee I wish I'd grown up in Victorian England, or maybe during the time when that colossus Bob Menzies strode the earth. Hey I'm a conservative.
It's the Reader's Digest version, I agree, but as that august magazine swings ever more towards the conservative side, we should be thinking that short is sweet.
At the same time, I do wonder what Mr. Melleuish is teaching his students. I can imagine after a class that his students, learning from his rigorously analytical approach, would now have a pre post modernist, Victorian astrological handle on the meaning of life.
Come on down Gen Z. How old are you? What's your star sign? Aquarius. Does that mean we're destined to be fuck buddies?
Watch out young things, baby boomers are so devious and inclined to spin, they might try this pick up line on you. Don't fall for their spin. They're ruined the country, they're ruining the country, the country will be ruined because of them - strike out the one least applicable - and they might well ruin you too. And while you're at it, watch out for drummers. And remember:
No great man lives in vain. The history of the world is but the biography of great men.
Thomas Carlyle
(Below: Homer Simpson trapped in a world of baby boomers. Eek, he is a baby boomer. That's right, aged 36 in 1987. Do the math. See how tricky and devious they are). 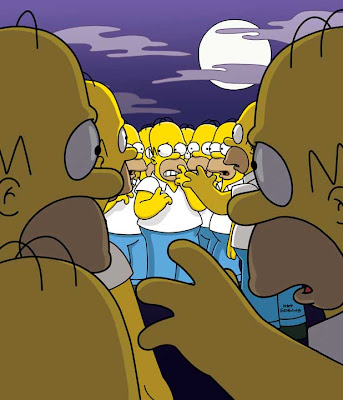 Posted by dorothy parker at 8:24 AM