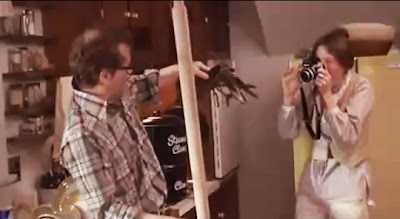 (Above: Woody Allen in Annie Hall showing how to gourmet cook a live lobster).
Every so often I love to enter the moonscape of Miranda the Devine's mind.
There was the ladette to lady fetish, and the fetish for Top Gear (live), and the fetish for plastic minds being warped by screen culture.
And blow me down, she's right, screen culture does warp plastic minds, for surely that's the only explanation for her panegyric of praise for MasterChef, which is after all just a re-branding of a BBC show that first hit the air way back in 1990 (we're still a bit slow in the colonies but you can catch the details here).
You can read the Devine's rapturous rant under the header Small fry rushing to do the dishes.
To read the Devine, the show is the second coming of Shakespeare, or perhaps even Christ himself. It's turned her into a raving foodie sensualist - for it's a show about creating pleasure, about flavour and texture and harmony, about elevating the senses of taste and smell.
Lordy, the next thing we know, she'll turn left, and find herself in Adelaide, opening a shrine to that original foodie Don Dunstan.
Whatever, the show hits all the right marks with the Devine. All the family can watch together (better than a church group), leading to happy families, and it's also incredibly wholesome:
Then there is the niceness of the show, which naturally appeals to children more than anyone, as they generally prefer adults to behave well.
Unlike all those nasty reality shows like Sylvania Waters or Big Brother. No infighting or controversy, and still it rates its socks off. Obviously someone respected the audience. But will this new found niceness spread to the greenies, spawn of the devil, and their love of wholesome organic food? Not likely, especially if all they offer is lentils. Where's the 'erbs and spices, you greenie dolts. You're thinking like Neil in The Young Ones. Throw those lentils on the floor, and sharpen yourselves up.
Getting the sense that something strange is going on here? Better check the water, in case someone's put something in it, like Flavor Aid. Could the show even be nice than The Sound of Music? Experts still debate this issue fiercely, but the Devine is in no doubt.
Unlike Australian Idol and Britain's Got Talent and Gordon Ramsay's Hells' Kitchen, the show doesn't rely on the abject humiliation of chosen contestants for its entertainment value. Quite the opposite. The judges are kind and seem to calibrate their criticism according to the resilience of the contestant. Any controversy, such as it is, has never been aired, with the recently deposed contestant Poh complaining to newspapers that the cameras never showed how she had been undermined by Chris.

It's a love in! And you know I think the Devine has the hots for the hulking soulful food critic Matt Preston - though she cleverly uses others to text her hymn of love to him. But I don't think we should go there because someone has to think of the children:
It's one thing the kiddies might not notice - but for some of the home cook fans of MasterChef, Matt Preston is dangerously close to becoming a fetish.

Lordy, the dangerous new world of the over-full intertubes and screen culture have indeed warped the plasticity of her mind and turned her into a fetishist. Can edible panties be far behind?
But will it last, this new incarnation of the Devine? Who's prepared to offer me good odds about the chance that in the next few weeks we'll be reminded again of the dastardly nature of caffè latte loving, chardonnay sipping, inner west living, trendy foodie wanker, swanky ponce strutting elites, who discovered foodie-ism decades ago, and have  provided finger food fun for wise cracking commentariat columnists ever since.
Remember the next time you sit down to a smoked salmon terrine with hazelnut herb salad and avocado, you and the Devine are as one. If you boldly saw the head off a live fish as it actually flops on the table in a live way, then you're not Woody Allen trying to boil a lobster live. You're in league with the Devine at the sheer raw excitement of catching your own and degutting it and chopping it up, as if back in the world of Viking nature. Ayn Rand lives!
And if you manage to hack off the head and feet of a pigeon, you're clearly not a Nazi loving pigeon fancier living at the top of the apartments in The Producers. No, you're at one with the Devine.
Dear god! Waiter, bring me a dog's eye. And make sure it's covered in dead horse. Lots of horse. Tout suis, garcon, tout suis. And yes, for dessert, I think I'll have a lamington avec de coco sechee.
Who'd have thought it? Driven to being a culinary Australian cretin by watching the Devine transform into a foodie before our disbelieving eyes ...
(Below: pigeons planning their revenge on Devine foodies). 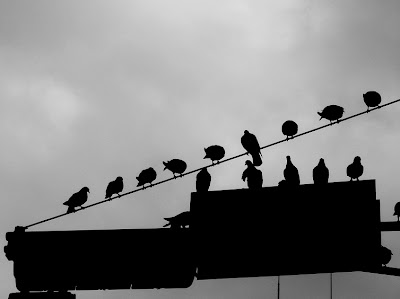