Gerard Henderson, Malcolm Turnbull, team sports, and what if ... 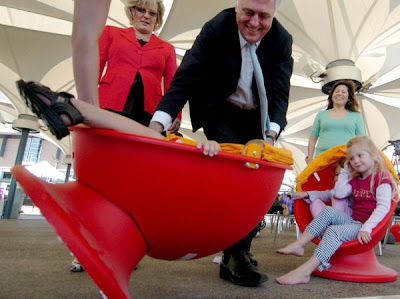 (Above: Malcolm Turnbull plays spin the chair, badly).
The stars have shifted in the firmaments a little, galaxies have trembled, and the natural order of things has been disturbed.
You might think all is well with the world. As usual, Gerard Henderson has mentioned John Howard, former PM, in dispatches, which is to say his column New blood will revive Coalition.
But to the shock and consternation of the world, there's a whiff of cordite, a dash of criticism, a tad of remorse, a soupcon of unhappiness:
Nor is any present Liberal primarily responsible for the party's discontent. Rudd is a very able politician who leads a strong front bench. Moreover, Howard failed as prime minister to do what he said he would do - oversee an orderly transition of leadership in the way the Liberal Party founder, Robert Menzies, did in 1966.

If Howard had stepped down in early 2006 he would have been succeeded by Costello, when Labor was led by Kim Beazley. The ALP may or may not have replaced Beazley with Rudd. If Costello happened to win in 2007, there would be no problem now. If he lost, Costello could have stayed in Opposition until the emergence of a new leader - which might have been a more experienced Turnbull.