Bronwyn Bishop, the real Julia Gillard, the unemployed, the fine print, the Chaser lads, a good question and the glittering eye 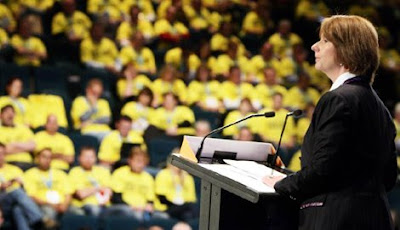 (Above: the photo deployed by The Punch with the tag: Picking a fight with the Labor's ugly step sister).
Spending a little bit of time with Bronwyn Bishop is a lot like spending time with an eccentric aunt in a Mosman shindig where the sherry is as dry as the politics.
I'm thinking a fino from the Palomino grape of course, and only from Jerez of course, and after a few tipples the conversation can get free flowing. Though how The Punch thinks Will the real Julia Gillard please stand up sits alongside (or down below) Hysterical hunt for the only gays in the media village is one of the deeper mysteries of demographic branding.
First a little bit of indignation:
There should be no place in education for propaganda!

Then a little memory loss about what's just been said:

To use a Ruddism ‘fair shake of the sauce bottle’ – I think the Liberals need equal access to at least balance the message.

Ah yes, there's no place in education for propaganda, except when there's a place for propaganda in education.
Meantime, won't someone think of the children, especially when the snap used to illustrate the piece is that of fiendish redhead Julia Gillard in front of a bunch of what looks like innocent children, lily white in their purity, except of course they have strange yellow tee shirts on - perhaps the result of thinking the east is red, as the dreadful stain of communism, unionism and Laborism begins to turn them into a bunch of addle headed vampires.
But it isn't the children of course, it's a bunch of addle brained unionists, and that's why it's labelled: Picking a fight with the Labor's ugly step sister.

Oh that's so cute, such a pun and play on words.

But what about the evils of socialism and subsidy and the government distorting the labor market by throwing around cash? Well yes I will have another sip of that fino, such a delicate almond drop:

How about letting the subsidy apply to contractors who could then at least get back to work, keep their skills up to date and enhance their CV for future opportunities. The Government had a lot to say about working families in opposition- How about a policy change and create a few.
Oh won't someone think of the contractors and John Howard's vision of every Australian as a contractor, a small business person on their very own private contract. And keep on spreading that cash around, socialism is good, except when it's bad.

And what about the fine print, I ask you, as this current government peddles its nonsense to an innocent Australia? Is, for example, this paid maternity (or paternal) leave on the level? Certainly not:

Well, the budget papers say paid maternity (paternal) leave will be available only if you don’t take the baby bonus (now means tested and taxed), and will cost the Government $731 million over 5 years. However what you pick up on the swings you will loose on the roundabouts.

Loose? Yes, I will have another tipple. Now tell me about the evils of that monster Rudd:

Clever isn’t it. The Government in the Budget papers calls it “rebalancing of the family payment system”. You can say that again. It always pays to read the fine print before you get too carried away with Rudd largess.

Largesse? No thank you, I'll have none of that Old French, Middle English spelling when losing the 'e' perfectly sums up that illiberal Rudd and his lack of bon vivant liberality of spirit. It's a perfectly acceptable variant and it sums up his penny pinching ways. But do remember socialism is bad, especially when it's penny pinching. If we're going to have socialism and governments spreading the cash around, let them do it in a generous, bon vivant way.
And what about the question of censorship and those Chaser lads, even if everybody else has allowed that controversy to die a natural death - at least until the next show - with heads rolling and the lads suitably chastened (and we already know what to say about the next show don't we - the lads have lost their edge):

Me thinks the ABC should have had a closer look at self-censoring and told the Chasers War On Everything that there are ethical standards to be met and they just failed miserably.

Odds bodkins, and me thinks 'tis passing strange that we should take a journey back in time, but 'tis true, and speaking it 'tis even truer, it's just not on for these so called clever dicks to lampoon sick and dying children, especially when speaking out against people on the basis of race or sexuality, what with the way all these weird Racial Vilification laws, and other such laws, can result in criminal charges! Actual criminal charges!
Is there some way we can fit up a criminal charge against these lads for their wayward lack of humor? (But me thinks their next show will lack, how can I put it, the edge).

And while we're at it - would you like another taster of that fine floro - what do you think of that nasty horrid Mark Latham and his outburst against Australian defence personnel. What a bitter, nasty thing to say.

And to think this man was putting his hand up to be PM. Would Latham pass the necessary tests, both psychological and physical to be accepted into the Australian Defence Force? A good question!

This is a man who allegedly broke the arm of a taxi driver and smashed a journalist’s camera- who’s the meathead? It makes you wonder ...

In my time as Minister for Defence Industry, Science and Personnel, I had the good fortune to meet many serving men and women. I can say these people are smart, switched on and represent Australia with pride and commitment and we in turn should be very proud of them.

Mark Latham get over your defeat and move on!

Meathead! Now that's more like it, instead of that bonehead Rudd's attempt at convivial conversation in a dinkum Aussie style.
And indeed so must we all move on, so thank you for a splendid chat, and it's great to hear that things are going so well on the backbench for the Liberal party, and that everyone has got over their defeat and moved on, even Peter Costello, but I really must be off ... it's been ever so nice and ... and why am I reminded of that ancient poem?

It is an ancyent Bronwynne,
And she stoppeth one of three:
"By thy long white pearls and thy glittering eye
"Now wherefore stoppest me?

The bridegroom's doors are open'd wide
"And I am next of kin;
"The Guests are met, the Feast is set,--
"May'st hear the merry din.

But still she holds the wedding-guest--
There was a party, quoth she--
"Nay, if thou'st got a laughsome tale,
"Marinere! come with me."

She holds him with her perfumed hand,
Quoth she, there was a Liberal Party --
"Now get thee hence, thou grey-beard Loon!
"Or my Staff shall make thee hearty.

She holds him with her glittering eye--
The wedding guest stood still
And listens like a three year's child;
The Bronwynne hath her will.

You know how the rest of it goes, and what fine fun it is too.
(Below: Bronwyn Bishop). 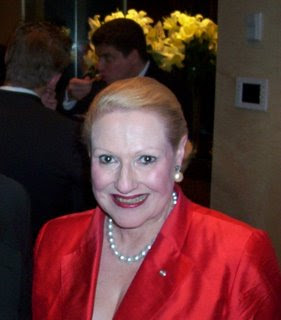