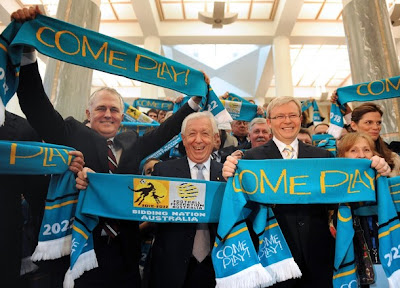 (Above: big Mal lining up on the left before the game while chairman Rudd remains resolutely on the right. Go figure).
By golly if you wanted an optimistic coach, you couldn't - shouldn't - look further than commentariat columnist Piers Akerman.
The fat owl of the remove is a positive Bunter of a chap when it comes to seeing the best of all possible worlds in his team. You can imagine him standing in the dressing rooms of the NSW rugby league team telling the troops that they're just a short time away from pulverizing their vicious opponents, those terrible Queensland toads.
There's any number of teams he could help out - pardon the parochialism, but Manly and South Sydney could do with his cheerful insights and positive tongue.
Of course this might not always help a team in trouble. After all the toads thrashed their rivals, suggesting an overly optimistic pep talk at half time might actually be more what you expect from a naive, deluded cheerleader.
But the thought of Piers Akerman in a cheerleader costume is too much to bear. The mind begins to shatter, the soul begins to quake. Let's not think of him as a physical cheerleader, so much as a metaphysical one.
Still, you'd want him in your corner, tending the water, applying ice to reduce swelling, stopping the bleeding with art and science, fixing those cuts with a flourish. (I know, the cornerman also throws in the towel, but if you're that kind of quitter, loser, then you don't need an Akkerman, you need a greenie leftie loser in your corner).
Which is why, while the rest of the world has moved on with barely disguised irritation or disgust, Akkers is still trawling over the affair de la ute, and finding within it great signs and portents of hope for opposition leader Malcolm Turnbull.
In Turnbull will survive utegate, he finds Chairman Rudd down for the count, the body blows mounting, the knees of Malcolm intact and not knobbly at all:
Those who claim utegate or mategate has cut off Opposition leader Malcolm Turnbull at the knees are indulging their fantasies.
The last weeks of the winter session have been more damaging to the Rudd Labor Government than the Coalition, no matter how you slice it. Friday’s announcement of the death of Labor’s GroceryWatch, the latest in the line of broken election promises, underscores that point.

Not that Turnbull hasn’t taken a few whacks. But would the electorate really look at an Opposition leader who isn’t prepared to have a go?
A few whacks? That's right Mal, it's only a bloody nose, go out and hit 'em again.
But let's not go into all the details of the affair de la ute again, the most tedious saga in the history of football, with so much fumbling and dropping of the ball, you'd think they'd all be better off playing soccer.
It's enough to say that at half time, in Akkers' eyes, big Mal has made plenty of touchdowns, so much so that the deluded Laborites are using their own, in a feeble attempt to debauch and defame him:
Former Labor leaders Kim Beazley and Simon Crean, to a lesser extent, demonstrated that nice guys finish last. The small-target strategy isn’t a winner.
Prime Minister Kevin Rudd revels in his popularity ratings, but another former Labor leader, Mark Latham, enjoyed his moments in the sun, too, and now he is vilified within the ALP, at least by the class clown, Infrastructure Minister Anthony Albanese.

He opened a new vein in surrealism when he branded Turnbull as the new Latham, showing all the depths of loyalty the electorate has come to expect from the ALP.

But if Latham’s name is now an epithet to be hurled across the House, will we see Albanese start tagging his many enemies as Whitlamists, Chifleyites and Curtinistas?

That's right Mal, no point in being a small target. Make sure you draw a big cross on your forehead so that the boofheads can kick you silly. Soon enough they'll start mistaking you for Gough Whitlam.
What else? Well Swan is dead set scared, and Joel Fitzgibbon's been dumped, so they no longer have a decent fullback, and anyway their left jab is the kind of punch you'd expect from pansies, and did we mention just how useless the greens are?
What have the greens got to do with utegate, you might ask, proving you have absolutely no understanding of football or boxing strategy. In short, if they're in the ring, or a nearby ring, or the court next to the main court, kick the shit out of them.
You see, some think that the snide Eric Abetz has actually led Malcolm Turnbull down a gully where he might have been dry gulched, and even winged in the shoulder by some varmint shooting hot lead.
So little you understand, you fools:
The same person also noted that while the media was riveted by Liberal Senator Eric Abetz’s questioning of the gloriously named Godwin Grech, not enough attention was paid to Abetz’s attack on Greens leader Bob Brown over the number of anonymous donations Brown had accepted to pay his legal costs and channel to Green causes.

“The Greens’ own website calls for transparency about donations and claims that it will make public all donors’ identities at the end of each three-month period, as well as the cumulative total of donations over the past 12 months, where those cumulative totals amount to $1500 or more,” he said.

So there! Eric's a winner, just like big Mal. Those whacky zany Tasmanians really know how to kick a goal, even when it's an own goal or a rushed behind.
Sure the evil toads might have won a couple of matches, and sure we can't actually think of enough upside about l'affair de la ute to fill up a column, but look at what was done to the Greens. Now there's a knockdown victory.
Any second thoughts after the match coach as to how we might play the next game?
Everyone’s wise after the event, and if Parliament looks more icky after Labor’s attempt to muzzle Grech and Turnbull’s attempt to implicate Rudd as well as Swan in the attempts by Treasury to curry favour for Grant, that’s the price of robust scrutiny.

Uh huh. Robust scrutiny. And it's parliament and chairman Rudd and that evil rooster Swan that are carrying the bruises. Big Mal's come off the field without a scratch. And I can say that after giving him a robust scrutiny.
Well that's a heck of a lot better than dumb, inept, mishandled scrutiny, dropping the ball at just the moment big Mal could have crossed the line and scored a touchdown.
Perhaps Akkers, as a coach who puts Wayne Bennett in the shade, is there anything that could have been done differently?
If there is one lesson that can be drawn from utegate, it is this: never put the leader out first on a high-risk proposition, always send someone further down the food-chain to test the risk and take the fall if necessary.
A high risk proposition? I thought it was win-win all the way, and what's this talk about taking the fall? What fall was that? Not the biblical one, where big Mal gets kicked out of the garden of eden?
Next you'll be going into a speech about how Big Mal coulda been a contender. But I get the strategy - should the lord provide another ute, we'll send in a head kicking, coat hanger delivering, wrestling in the tackle thug, because big Mal at heart is such a lovable, sweet softie. Someone from Melbourne Storm? After all they're a Victorian team and represent evil incarnate.
But sad to say, I reckon the toads will thrash NSW in the next game, making it a clean sweep, and I'm not so sure that the coaching team is up to the task of preventing it.
Just as I'm not sure sure that reading Akkers would do anything for Malcolm Turnbull, except produce a swelled head and delusions of grandeur, and perhaps he already has too many of those.
Sigh, there's nothing for it. We'll have to get Akkers into a fitting room to see if we can find a cheerleader costume that will fit. It might not be a pretty sight, but I'm sure that it'll lift the spirits of the lads as they run out onto the field after half time.
If nothing else, the prospect of being hugged by a cheerleading Akkers should keep them out on the field and playing as if their lives depended on it.
Run hard big Mal, Akkers is right behind you.
(Below: maintaining a tone of cheerful optimism in this column, how Akkers might look after a fit out in the cheerleaders' dressing rooms). 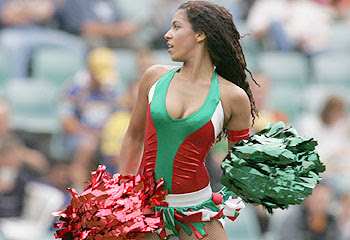 Posted by dorothy parker at 7:54 AM