Janet Albrechtsen, Sonia Sotomayor, Activist Judges, and the benefit of a lack of empathy 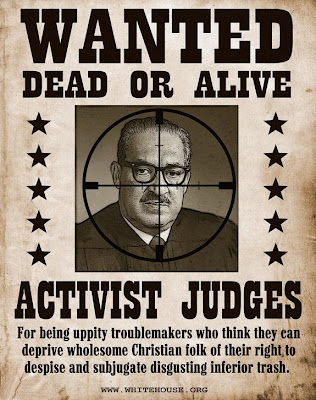 Back in 2008 you probably shared Janet Albrechtsen's outrage and indignation at the way activist judges were ruining Australia.
Quite likely you were as appalled as she was at the behavior of Anthony Mason when he got the gig as chief justice in 1987 (Read between the lines):
Mason took the High Court on the most activist jaunt in its history, implying rights to free speech into the Constitution in a way only an activist judge can do and allowing an unprecedented leap in the common law in Mabo. Whether you agree with those decisions or not is irrelevant. The point is that the Herald later concluded that Mason was the “most radical chief justice we have ever seen”.
Few could have predicted Mason’s transformation. He succumbed to the great judicial temptation of using the bench to mould what he regarded as a better world. He grew bored with being a black-letter lawyer. He preferred the role of philosopher king. As one judge remarked, Mason was seduced by the “siren song of left-wing intellectuals” into becoming a judicial innovator.

And you were probably as nervous as she was about Robert French getting the chief jutice gig.
Is history repeating itself? Will the lamb become a lion? It is entirely possible that the descriptions offered in effusive praise of French give us more than a few hints that, as chief justice of the High Court, he may be unable to resist the temptation to do a Mason.

For starters, any judge breathlessly embraced by left-wing legal academics and commentators immediately deserves a question mark over their so-called safe, black-letter lawyer credentials.
Oh there was endless anxiety, confusion and concern, what with all those lefties crowing about what a fine choice French was, and our very own Dame Slap bemoaning judicial activism and radical chief justices.
But wait, there's more, along with the steak knives. If you want Albrechtsen having a shot at Michael Kirby, that sleeve wearing homosexual activist, you can go here Get set for Kirby unplugged and get a bonus serving about activist judges on the Israeli supreme court.
Indeedy, if you have time to google mindlessly, activist judges in Australia are something of an Albrechtsen hobby horse, a standard column filler when she's wanting to get on her high horse and tilt at windmills.
Which is why it was hard to resist a hearty cackle when reading Albrechtsen on Obama's nomination of Sonia Sotomayor to the United States' Supreme Court in Obama's poor choice a cautionary tale.
Alas, Obama’s determination to cement his identity politics on the Supreme Court is not surprising. When you vest a court with the power to make political decisions, to determine the ambit of vaguely described rights, judges are effectively seconded to affirm into law the political ideology of the politicians who appoint them. If those champing for an Australian charter of rights get their way so that judges will decide issues that are fundamentally political, we will end up with the same unfortunate and unseemly politicisation of our judiciary.
Phew, that's a relief. It seems we don't have an unfortunate, unseemly politicization of our judiciary, despite the best endeavors of activist judges like Michael Kirby, and activist chief justices like Mason and activist appointments like French.
So what were all her alarums and shrieks about? Nothing, nada, zip. All is quiet and well on loon pond:
Contrast the quiet process in Australia. Remember when the most recent new judge was appointed to our High Court? Many will struggle to remember the judge’s name. A small report here and there. Perhaps a longer feature about the new judge. Then we move on. And that is as it should be.
Great, and I for one will never worry again when I hear Albrechtsen gnashing her teeth about activist judges in the lucky country. Why, and even if they do activate, what's it matter - at least when they activate in the right way, with right thinking suds cleansing power, and then it becomes a thing of joy and beauty:
So let there be no mistake. Last week the Supreme Court under Chief Justice Roberts engaged in some significant social re-engineering of its own, effectively ignoring precedent and substituting its own opinion for what had been settled law.

This, however, is where all judicial law-making must take us. For years progressive judges had the game all to themselves. They took advantage of the orthodox reliance on precedents by the more traditional-minded judges. Realising that laws they did not like could be overturned quickly and without the messy business of having to win popular, let alone parliamentary, consensus judicial activists legislated away feverishly. Once they re-made the law, they routed the traditionalists on the bench by appealing to precedent. In a masterstroke of tactical ingenuity, the judicial law-makers made their activism irreversible by saying to traditionalists “well, now that we socially engineered society by our new law, you are duty bound to follow it. To do anything else would be to adopt the activism you abhor.” Neat pincer movement. And it worked. Each new piece of social engineering became effectively entrenched, to be added to freely, without any hope of reversal.

The US Supreme Court has called a halt to this one-sided caper. It has co-opted the weapons of the activists - calls to principle and the pretence of adherence to the settled law - to reach the decision it wants. Its language may be flowery but its intent is deadly. The one-sided war is over. Judicial activism of the progressive kind will be met with judicial activism of the conservative kind. (The judicial counter-revolution).
Yes, take that you progressives. Activism can be good. Judicial activism of the conservative kind is what the world needs, unless voters tire of it. But who could tire of Antonin Scalia, Clarence Thomas, Samuel Alito and John Roberts?
Which is why I find her cautionary tale about Obama's choice of Sonia Sotomayor such a hoot, a hack recycling of right wing Republican talking points, remarkably un-illuminated by reference to Sotomayor's actual judicial career- a strategy, which if Republicans and like minds persist with, will see them alienate their few remaining Hispanic supporters, and ensure that the party stays in a Rovian Limbaugh Cheney-led limbo for years to come. An irony as they chortled and crowed about how Bush was stacking the Supreme Court their way for years to come.
But in her trawling for indignation about an Hispanic being proposed for the gig, Albrechtsen did pick up a few sympathetic comments, this being from a conservative lawyer:
The real problem in all of this - both in the US and increasingly in Australia - is the appointment of judges who come from odd (and usually lower-class and Labor voting) backgrounds and who therefore bring to the bench a skewed view of life, which usually reflects itself in the way they reach their judicial conclusions. My late father would have described them as having a “shitty liver”. Homosexuals of both genders on the bench cannot hope to understand how normal families live and work. Similarly so with divorced Hispanics who grew up in in poverty and will doubtless bring a personal perspective of a hatred for Whitey to the bench.
Odd backgrounds? A skewed view of life? No silver spoon in mouth? Poofters in abnormal families? Divorced poverty stricken Hispanics hating whitey? Outrageous.
Ah yes, Hispanic is just so odd. Like that Sol chappie feller. And as for poofters ... beyond the pale. Wot, wot and we were born to rule, we few, we bold and brave few whiteys shouldering the white man's burden!
He added as a capper: What next for this country. A divorced female Aboriginal Legal aid barrister with a hip problem onto the High Court? Disgraceful. Err, think you left out lesbian green whale lover as part of the CV surely old chum. Wot wot, spiffing, tally ho old bean.
Feel free to browse Dame Slap's column at length - it's too tiring to parse it here - but perhaps pause when Albrechtsen picks up on Obama's use of the word empathy as part of his criteria for a candidate, as if this condition or disease is the last thing any human being needs, let alone an activist judge. Judges you see, can't be human, and the law has nothing to do with humanity. It's just a dry as dust interpretation of legal tomes as remote from people as the the judgment of kings.
Which is why I've appended Colbert on empathy, courtesy C and L.
Posted by dorothy parker at 9:08 AM