Henry Ergas, confusing excess with success and ideas about facts and unknown unknowns with blackjack 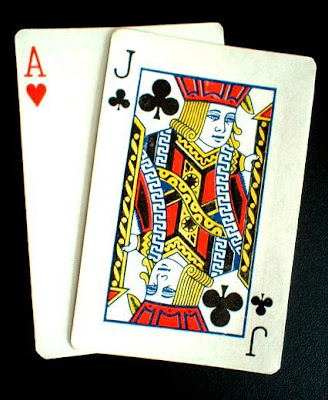 The loons are out in force today, but it's hard to get excited about their offerings as they get bogged down in technical details, determined to show that the end of the Australian economy is nigh, and perhaps along with it the lucky country's civilization as we know it.
This sort of rhetoric requires careful Jesuitical attention to detail, so that the mote in one's own eye can be avoided to concentrate on the mote in Kevin Rudd's eye.
Ever reliable Henry Ergas shows how it's done in Don't confuse excess with success. News that the economy was not technically in a recession - never no mind that no one has a solid definition of technical recession - was a great excuse for a breast beating round of gloom worthy of a 'we'll all be rooned' Hanrahan. Because as you all know, good news is really bad news, and bad news is generally terrible news. Take it away Henry:
This week's good news is that the economy is not technically in recession. The bad news, which is far more serious, is the lasting harm the good news could cause. Central to that harm are the lessons being drawn from the gross domestic product numbers. As the Government grasps paternity of the unexpected outcome, strong claims are being made about the efficacy of the present economic policy, with little or no basis in supporting evidence. And in the euphoria of the moment, the mounting problems associated with that policy are being ignored.
All of this feeds an atmosphere in which caution is thrown to the wind, as the notion that governments should "err on the side of doing too much rather than doing too little" becomes a core tenet in the state religion.
Ah yes that ever reliable metaphor. The state as religion, the climate as religion, science as religion, creationism as science, and doughnuts as religion.
Pious Henry, being a contrarian religionist, finds much to get depressed about in an open letter by 21 economists published in The Australian Financial Review, wherein they preach this new state religion.
Henry spends the rest of his column doing a two shoe shuffle to show how these 21 economists amount to anything but blackjack, suggesting that vingt-et-un is not a game they should be playing as the punctured pontoon of the Australian economy sinks under Rudd's double down strategy.
Or something like that, because it's a mind numbingly dull column. Why should a squawk of this kind be so dense, when really all it's saying is that we're all doomed under Rudd. Why does the poking of the entrails involve such gravitas and tedium?
I guess all the equivocation and serious contemplation of the issues is a bit like the doctor trying to find a simple way to tell you that you've got cancer and are doomed, while sounding like he's considered every aspect of the diagnosis in detail.
So we get lines like "None of this is to demonise budget deficits." Now pray, allow me to demonise the Rudd government's budget deficit.
Or "It may be that, faced with the Depression of the 1930s, governments did too little, too late."
Now pray allow me to demonise this inaction by pointing out everything that the socialistic Roosevelt did prolonged the depression painfully (and likely as not remains a strong contender for the cause of the collapse of the economy in the reigh of George Bush). And everything every government has ever done since then has always been wrong, producing years of hardship, far-reaching loss of output, and the prolonged misery of unemployment. "These are lessons that are painfully learned but readily forgotten."
But wait, just as you thought this prattling Polonius, clearly a strong contender for Gerard Henderson's throne of dullness, has made a convincing point about the futility of government doing anything, he offers up another gilt edged equivocation full of piety:
Of course, every recession, like every episode of economic growth, differs from those that preceded it and from its successors. In that sense it is true that the present situation is unprecedented. However, those differences do not mean that anything goes. Rather, they make it all the more important to be careful and realistic in the recommendations one makes.

These circumstances also make it crucial for economists to speak truth to power. As the eminent Australian economist J.B. Brigden, writing in exceptionally difficult times, put it, "As an economist, it is my duty to talk about costs": for although the gains from government spending are often obvious, especially to the recipients, its costs are readily ignored, and shifted from the favoured constituencies of the present to the income earners and taxpayers of the future.
So what would this truth to power involve in these circumstances that aren't the same yet curiously somehow are the same? It wouldn't be a re-hash from the years of Republican rule? Why of course:
Australia's long-term prosperity is best served by restraint and efficiency in government spending, and by advancing reforms that limit and reduce the extent and burden of taxation.
Yep, lower taxes, reduce spending, and don't y'all worry your pretty little heads about infrastructure, because government has no role to play, and when it plays a role, it always mucks it up. Unlike the wonderful private sector.
On these occasions, it always occurs to me that Henry Ergas was one of a team of cheerful advisers to Sol at Telstra. Sol started when the share price was hovering around $5 and when he left it was hovering just above $3, and the reward for this noble endeavour was $30 million in cash and bonuses for Sol's four years of service.
It does make me wonder about Henry's micro economic advice, and why I should worry about what he has to say about macro economics, but perhaps that's because I tend to stay with the known knowns, rather than the known unknowns, and rarely stray into the unknown unknowns. Silly me:
Ultimately, policy is shaped neither by facts nor by ideas, but by ideas about facts.
Wow. Policy involves ideas. You read it here first, always strong with the most devastating insights. Now for another one. What's the use of policy, when after all, governments know neither the facts nor have any useful ideas, and all they do will lead to tears.
It is this that makes the claims being drawn from this week's GDP numbers so very dangerous. Of course, the Government will want to bask in the glory of the moment; but what it must understand is this: that once unrealistic expectations about what government can achieve have set in, it is only needless pain and disappointment that can follow.
You know, it would have been so much simpler if the government had done nothing, and the private sector left to its own clever devices, and the cards had fallen where they may. That would have been the best way to avoid unrealistic expectations. Why if they'd done nothing, we might even have hit blackjack.
Posted by dorothy parker at 8:10 AM