Michael Costa, the rise and fall of a political powerhouse, and sundry highlights from a powerhouse career 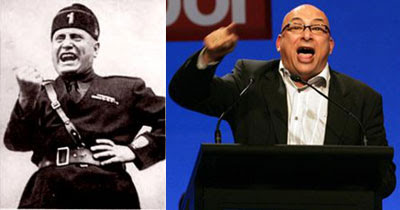 (Above: we have noted this cheap shot image circulating on the intertubes, and we reject its use completely and utterly. We do not endorse playing the man when you can play his balls, and we cite as our reference the very man who is so unfairly aligned with an Italian dictator:
The Hon. MICHAEL COSTA: I note the interjection of the Hon. Ian Cohen. Yesterday he spoke to the media and accused me of being Mussolini-like. Apart from the fact that the statement is clearly defamatory, I should like to know why he draws such comparisons. Is it because of my olive skin? Is it because of my Mediterranean background? I would like to know whether there are some racial undertones to these accusations.

The Hon. Ian Cohen: Point of order: Drawing racism into this issue is totally unfair. It was purely a political statement.

The PRESIDENT: Order! There is no point of order.

The Hon. MICHAEL COSTA: I find it quite incredible that the Greens and their representatives are throwing around accusations about Mussolini and other fascist figures from history. As we all know, Mussolini was a deplorable person; he was responsible for the murder of thousands of people in Yugoslavia, Libya, Ethiopia and even Greece, where my parents have their heritage. I am offended by the comments of the Hon. Ian Cohen. However, it is an indication that the Greens are rattled ... (time expired).
Well  it certainly wasn't because Mussolini got the trains running on time.
Ah the good old days, and they'll never come back.
But speaking of wankers, the gimlet eye of commentariat columnist trackers - sharper than Biggles on the path of the Hun, and as demented as the Phantom on a milk-only binge - will have noticed that Michael Costa, esteemed former treasurer of the derelict state of NSW, is on his regular perch in the Friday edition of The Australian.
His theme is political tragedy, and even his column's title makes you weep to think of the mighty who have fallen - excluding of course the actual inhabitants of NSW, about whom no one could give a rat's arse. But you get the whiff of the Shakespearian level of the Learian tragedy: Rise and fall of political powerhouse.
Which is to say the decline of the right in the NSW Labor party. You might even sub-title it Michael Costa, tragic rise and rise of a  political legend.
In any event the demise of the NSW Right is more complex than the dubious actions of any single individual. In fact, the destruction of Iemma's premiership was a final symbolic act of political suicide of this critically important political force. Tragic as the events leading to Iemma's downfall are, they are not the cause of the decline of the NSW Right. The antecedents of this decline stretch back to fundamental realignments within the Australian Labor Party following the end of the Cold War and the collapse of the Australian trade union movement's political relevance.
Tragic? Catching a train in Sydney is tragic, not so sure about the demise of Iemma.
Oh alright, tragic, but please, not endless tales about the NSW right from the time of the cold wars. Can we just skip ahead to the current disaster?
The NSW ALP under the leadership of Arbib and Bitar started to reflect the changes in the union movement with a more conciliatory approach to the Left, culminating in the unprecedented canvassing by Bitar of a little known left-winger, Rees, to replace a popularly elected right-wing premier.
Damn you, damn you all, a little known leftie hack for a popularly elected much loved human bean. Sob, now gone. The tragedy of it all.

The destruction of the Iemma government has ended any remaining notion that the NSW Right exists as an independent entity.

Destroyed. Like Troy.
There's a lot more of this kind of stuff, and before I nodded off to sleep, I began to understand this catastrophic tragedy was the fault of left wingers, right wing unions, unions in general, left wing unions, dissident right wingers, and the decision of the Labor Council of NSW to rebadge itself as Unions NSW as a way of distancing itself from the Labor party.  Did I mention the despicable, treacherous unions?
Oh and traitors who didn't understand how Paul Keating had shown you could be a member of the Labor Party and a supporter of economically rational and sensible policies - even if it was rumored at the time that Paul Keating had a hand in Costa's dismissal.
But enough of all that. Trying to track the brotherhood as they engage in turf wars is like trying to track who's in and out of favor in the Mafia. Though come to think of it the Mafia is a lot more transparent.
Anyhoo, if you want to read this week's outpouring, trot off to The Australian, a bigger and better home to loons than anything this humble, small pond could manage. Meantime, I thought I'd seize the chance to relish some of Costa's finer moments. Like this:
“I’ve always said politics was a modern Greek tragedy, it always ends in failure … and I can say my career has fulfilled that adage. I measure what I achieved by the amount of stupid decisions I stopped - the public will never know what they are, thank goodness.”

Oh fair suck of the royal king prawn Michael. We know only too well what stupid decisions you stopped. Like a decent transport system for Sydney. Decent policing so Indian students can catch a decent transport system safely at night. For starters.
But back to the fun. Remember Costa's encounter with unhappy firefighters? (Unionistas!)
"In true Costa style, he got out of the vehicle after doing a lap to avoid us and tried to intimidate the firefighters," he said.

"He was met with boos and much 'frank and open' debate regarding the NSW wages policy, and the threat to close fire stations and sack firefighters. He was quite aggressive, and the firefighters present were just as up front with him. It was quite a spectacle.

"My 10-year-old daughter then said, for all to hear, standing right next to him, 'Excuse me sir, I'm only 10 years old and even I know that is a lie!'

"Costa then tried to say that that was a good line that Daddy had taught her. He was then booed again." (Costa walks into the firing line ... of a little girl)
Ah yes, the good old days, but what about conflict resolution. You can always turn to the expert Costa:
Michael Costa stormed across the room - his face flushed, his hands clenched - towards John Robertson, the secretary of Unions NSW. "You blokes can get fucked," he screamed. "You're going to look like dickheads on Monday morning."

The state Treasurer was enraged that his ministerial colleagues and union leaders were trying to compromise his dream of privatising the state's electricity industry. (Costa's obscene outburst at unions)
And how about his fond reminiscences of the good old days when he was a Trotskyite?

The Hon. MICHAEL COSTA: I am very happy to elucidate my answer. My first experience with the notion of quelling was, I think, at Kronstadt during the Russian Revolution when Trotsky took a brigade of the Red Army and crushed the anarchists. In my previous manifestation as a young Trotskyite I supported his decision in an historical sense. I have had time to reflect on the mistake of supporting that decision, but every time Ms Lee Rhiannon speaks I tend to think that Trotsky may have been right about suppressing anarchists because they do not add to the parliamentary process or the complexities of managing government. I certainly would advocate it for the Greens. Ms Lee Rhiannon can take some comfort in the fact that she had the ultimate victory when Stalin managed to get a pickaxe in the back of Trotsky’s head.

Actually if you read the Wikipedia account, it was an ice axe or ice pick, and the blow was delivered to the head from above - as deep into the brain as the assassin could manage - but never mind the details. It's the style and the flair and the wit of the Costa manner.
Perhaps my favorite is as recounted by Alex Mitchell in Crikey 23rd September 2008:
Costa has already given some indication of his future work choices. He told one of his chief fans, Imre Salusinszky of The Australian, in April that he liked the idea of opening a coffee shop at his rural retreat in the Hunter Valley.

“So it’s one option in retirement. People would get to come along  — I’d make coffee and Deb (his wife) would make cakes — and they’d get five minutes to argue with me about anything they like. The cost would be built into the price of the coffee. Then I’d tell them to get fucked for nothing.”

To which cheeky Crikey reader David Sanderson added a coda:

Costa coffee, hmm, that would be the flapuccino - over-heated, with too much froth around the mouth and inclined to spill itself all over your crotch at the slightest provocation.
And you know the great thing is, thanks to Chris Mitchell at The Australian, we'll always have Costa with us on a Friday, and now he's re-lived in public, in a very Freudian way, the decline and fall of the NSW Labor right, we can look forward to endless bashings of unions, foolish lefties, greenies, and other sundry traitors to the cause ...
And they tried to tell Virginia that there wasn't a Santa Claus!
And by the way, you can all get fucked, and that's another free service from Mr Costa, the gift to NSW who goes on giving ...
Posted by dorothy parker at 11:44 AM