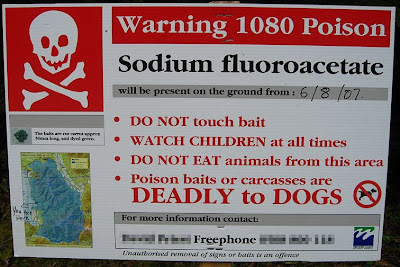 (Above: waiting with baited breath for the truth about climate change? Wanting to kill a greenie to save the planet? Want to strike a blow against the nihilists? Wanting to get rid of the spinmeisters and mythmakers so that Piers Akerman can stride the earth righteous and victorious? 1080 might be right for you. Sprinkle on a raw carrot and eat quickly, then if it works, you have just performed a scientific experiment. Spread the word amongst your friends, but quickly now, for time is short to get the truth out there).
Loon pond isn't a paper of record, and we're so over the climate change debate it's hard to crank the mind into gear, but it's always worth noting when the indefatigable Piers Akerman, our favorite Billy Bunter of the fifth form, goes into Molesworth-like Latin-ate scientific overdrive.
The man's a superhuman scientific legend and this time his inspiration and text for the day is brave Senator Steve Fielding, under the header Steve Fielding's warming to the climate doubters.
Strangely at time of writing the fat owl had only attracted 113 comments at a time when most of his columns manage two hundred or even two fifty.
Is everybody else as bored shitless with Akerman as they are with Chairman Rudd?
Mebbe. So let's do it quickly but first let's do it with the same warm up as deployed with tremendous wit by the fat owl. Nothing like a quote from the bible when discussing the flat earth theory, evolutionary science, or the heliocentric model.
SAYETH the Bible: “Out of the mouths of babes and Steve Fielding hast thou ordained strength because of thine enemies, that thou mightest still the enemy and the avenger.”
Actually I don't think that's a precise, exact quote. I think it passes for fat owl humor. Hey ho, nonny nonny no, on we go:
... the wait was worth it ... finding is of historic proportion ... series of serious questions ... Rudd Government's agenda ... revolutionary stuff ... prepared to listen to arguments .... an engineer (just having had a real job or studied a real discipline places him ahead of the majority of Labor MPs or News Corp journalists ... an open-minded person (unlike News Corp journalists) ... listen to both sides of the debate to make an informed decision ... science not conclusive ... listen to the experts (Ian Plimer and Piers Akerman) ... whole lot of issues not raised or discussed except by Ian Plimer and Piers Akerman ... argument accepted at face value ... demands answers ... why are Commie perverts to confident .... global temperatures diving like a swallow ... about to enter new ice age ... solar radiation the cause ... the sun gets hot .... parliamentary library co-opted ... plausible alternative explanations ....
And did we mention the greens, modelling enthusiasts and nihilists, v. champion of scientific enquiry? Watch out for spinmeisters and mythmakers ...
WTF? Nihilists?
Expert scientific endorsement by Piers' fans:
Save the planet, kill a greenie today.
Wait with baited breath for the truth to emerge.
Time to get out the carrots and the 1080.
Learn anything scientific? No, but heck it was short and sweet, and now you can end your visit to loon pond refreshed and optimistic after spending time with the sharpest knives in the drawer.
Posted by dorothy parker at 3:20 PM