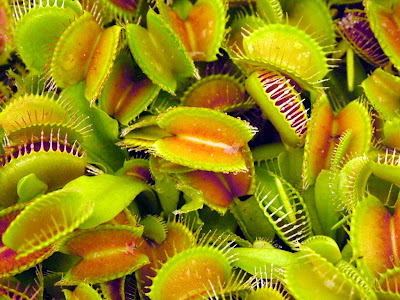 (Above: does having a vegetable plant on the kitchen shelf make you a consort of a mass murdering plant, and set you up either as a victim of the Triffids or the little shop of horrors?)

Beware the greenies who think people are parasites, sings the column header for Brendan O'Neill's column in The Australian, but it would have been better titled Beware the siren songs of the loons.
Let's get the straw men out of the way first. You have to be in a weirded out place, as PETA clearly is, to get upset about Barack Obama tracking and killing a fly while taping an interview for Conan O'Brien's show.
"That's some pretty impressive hand-eye coordination right there," Jimmy Fallon gushed. "Makes Obama look like a bad ass."

But now People for the Ethical Treatment of Animals, calling it an "execution," wants the commander-in-chief to show a little more compassion to even "the least sympathetic animals."
The group has sent Obama a device that traps a fly so it can then be released outside. (PETA miffed at President Obama's fly "execution").

I maintain a fragile optimism that the story is a hoax, a put up job so that PETA can deny it and show that they are not as mad as march hares. I checked several times to make sure it wasn't April 1st, but it seems PETA persists in the notion that human beings have a long way to go before they think before they act. Which is to say Obama isn't the Buddha, he's a human being and should respect all living things.
Sigh. Is it so wrong to yearn for the glory days of Chairman Mao's great sparrow campaign, as part of the great leap forward from 1958 to 1962, which saw rats, flies, mosquitoes and sparrows targeted for elimination? Yep, sure was since PETA - or is that O'Neill? - can't stand the Maoist betrayal of Marxist thinking (Great sparrow campaign).
"We believe that people, where they can be compassionate, should be, for all animals," PETA spokesman Bruce Freidrich explained.
Um, okay, now I've been credentialed as a mass killer - flies, slugs, snails, mosquitoes, moths -you name it, bring 'em on and I'll slaughter them - I feel I'm on safe ground when tackling this O'Neill feller. Sure I have a soft spot for spiders and let them live - if they stay out of my way and do work around the house by participating in the slaughter of insects - but don't consider this a weakness, so much as mutual respect in the killing fields.
Strangely however, for a man with Marxist tendencies, O'Neill starts off with a quote from the bible:
In earlier eras, from biblical times to the dawn of the Enlightenment, Earth was seen as the property of man, something we should conquer and tame and use to our advantage. Mankind should have "dominion over the fish of the sea, over the birds of the air, and every other living thing that moves on the Earth", said God in the book of Genesis.
Okay. When someone starts off an argument by quoting from Genesis as if it contains any wisdom or truth or insight, and in particular relevance to our current situation, I know I'm in the company of a loon. Even if it's done in a post-modernist, reflexive, post ironic way as part of a clever discourse.
It doesn't help O'Neill's case thereafter that he proceeds to quote any number of alternative environmentalist loons who regard man (perhaps even woman?) as a pox on the earth, an alien presence, an infestation, a malady that has made the planet terminally ill.
Well yes, it's hard to be into misanthropy and eccentricity, in about the same proportion as it's hard to get into Genesis. Lord knows, the Earth Liberation Front is one of those strange manifestations of fundamentalism, no better or worse than the mob who believe in the literal truth of Genesis (the ELFers issued a threat to the head of the Hazelwood Power Station in Victoria because of its coal habit, much as the literalists aren't above slaughtering the odd non-believer or abortion performing doctor). Apparently the ELFers are kissing cousins to the Animal Liberation Front.
Drawing strength from his dislike of this bunch of loons, O'Neill then runs through a list of other human hating humans, from John Gray, James Lovelock and Kurt Vonnegut through to Earth First! Even The Matrix films come in for a pasting, when in fact only the last two shows deserve outright condemnation for silliness beyond the services of entertainment.
Even the harmless symbolism and bourgeois futility of the Earth Hour showcase - wherein loons sacrifice an hour of power and consume much more power by devouring grog, food, and candles by the idyllic harbor - gets up O'Neill's nose, and is seen as a sinister portender of the crazed ELF guerilla movement.
So what's O'Neill's final solution?

The threat of the ELF should be taken seriously by law enforcement agencies, but in order to really challenge such groups we will have to take up the misanthropy of modern society. Humans have not destroyed the planet; we have humanised it, turning what without us would be another pointless planet orbiting the sun into a place of abundance, community, exploration. We don't need to rein in the "human footprint" but rather stamp it even more indelibly on our planet, and in the future, on other planets too.
Um okay, we have another deluded futurist in our midst, as loonatic as the common or garden ELF loons. It's our god given right (so Genesis says) to trash the planet, and if we trash it well and long enough, never mind, we can go trash other planets, and leave Wall-E behind to clean up the mess (or does Wall-E portend as sinister a mind set as The Matrix?)
It must be wonderful to have a Marxist enthusiasm for the future, and a firm belief in the wonders of technology, but is it totally perverse to have an affection for the Amazon basin in its current form? Is it possible to think it might be interesting to allow a few creatures to live undisturbed lives in small pockets in the earth, in what might even approximate wilderness, apart from the incessant filming, and the poking and prodding and studying?
Or are we all destined to watch relentless repeats of David Attenborough's wildlife shows as the only examples of the way the planet once was before O'Neill and his cohorts stamped through it, exercising their dominion over every living thing that moves on earth?
Surely O'Neill is as much a loon as the ELFs and here's hoping we can muddle through somewhere in the middle, without man (or even woman) hatred, and without jailing fly killers, and without thinking that inter galactic empires are a likely and immediate solution to the issues we might face here on earth at this moment in time. As we take our lessons from the humble cockroach and breed up from six to nine million souls, few of them likely to have the splendid opportunity to rant on the intertubes like O'Neill.
If you want a full whiff of O'Neill's special brand of loonacy, you can catch his blog here.
That will link you to his recent articles for spiked online wherein you can discover his peculiar form of Marxism, along with his routine bashing of greenies. In turn then you can discover the peculiar culture war being waged by spiked against misanthropy, priggishness, prejudice, luddism, illberalism and irrationalism in all their ancient and modern forms.
Excluding of course Genesis, that invaluable guide to modern living.
(Below: still feeling that the killing of insects is wrong? Toss away your fly spray can, preferably directly into the ocean so a passing dolphin can chew on it and explode, and get the handy humanitarian device below). 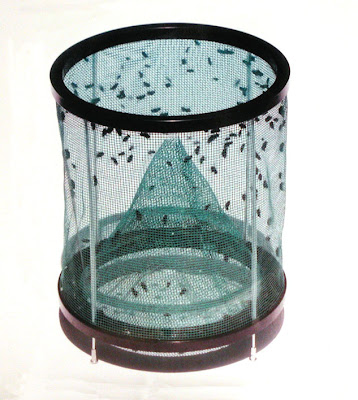