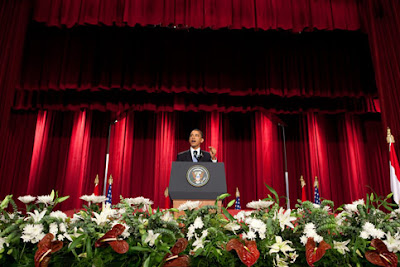 (Above: Obama in Cairo. Note the devices a good reader needs for a good easy read).
Gerard Henderson is in delightfully deluded form this week, in Obama and the tactics of truth. How's this for an opener?
In 2007 I referred to the United States President as Barack Hussein Obama. This seemed to me to be nothing more than a statement of fact. But no. Writing in the Crikey newsletter (February 13, 2007) the experienced and usually sensible commentator Richard Farmer accused me of being sleazy and, by implication, racist.
Nothing more than a statement of fact? Well if nothing else that establishes that Henderson is either a simpering fop, now happy to dissemble about what was going down in 2007, or it establishes that he was entirely ignorant of events in America at the time.
Either way, it's hardly ennobling, vis a vis Richard Farmer, since of course it was the trend at the time in the United States for commentariat columnists and the likes of Bill Orally to say Barack Hussein Obama with undue emphasis and a particular sneer, especially when they hit the "Hussein" bit - it not having escaped their notice that Obama shared his name with Saddam Hussein and sundry other folk of "Middle Eastern appearance".
For Henderson to trip back airily over time and announce that his writing was nothing more than a statement of fact, suggests that what's a statement of fact to him is also a kind of seminal delusion.
But that was then. Now Henderson can sneer at attempts by the Obama camp to play down his part-Muslim ancestry before the Presidential election, repressed at the time "with the support of the overwhelming majority of journalists reporting the campaign." Providing of course you exclude Fox News, and it's hardly likely that Henderson would be arguing that Fox News isn't a kind of news service, or that the people who work for it don't count as journalists so much as right wing lobbyists.
But that was then, and now we're confronted by the overwhelming majority of journalists shifting from supporting the campaign to supporting Obama's administration - which does suggest that Fox News - No. 2 amongst all cable channels in primetime and still with a strong anti-Obama bias - should be definitively excluded from any definition of actual journalism (unless Henderson cares to water down his definition of "overwhelming majority" or provide some actual statistical evidence for an airy wave of the hand, and a nonchalant refusal to rely on facts when rhetoric will do when recounting stories about prejudice in the media).
But that was then, and now Henderson can prance happily through Obama's Cairo University speech and prove that Obama is after all a man who comes from generations of Muslims and who in Chicago mingled with many Muslims and who is aware of civilization's debt to Islam.
To get the full flavor of Henderson's prim pineapple up the bum desiccated coconut maiden aunt tone, try saying the following after having lavishly sucked on a lemon:
And he acknowledged that "much has been made of the fact that an African-American with the name Barack Hussein Obama could be elected president". Quite so.
Yes, and indeed much has been made of it by sleazy right wing racists in America. Quite so.
And so it goes, in the Henderson way, with faint praise followed by snide put down.
Without question, Obama is one of the finest orators of the modern age, says Henderson, so how to put him down? Why by borrowing yet another talking point common amongst the commentariat:
These days Obama rarely talks without the aid of an autocue. But he has the ability to read with considerable fluency.
Not so much an orator then as a fluent reader.
Henderson then trawls through Obama's speech to find no dramatic break in policies inherited from his predecessors - George Bush snr., Bill Clinton and George Bush jnr.
What was new in the Cairo address turned on Obama's statement that the US "does not accept the legitimacy of continued Israeli settlements" and that the construction of these settlements should stop.
Oh right, new.
Anxious to maintain the momentum towards an Israeli-Palestinian settlement, President George Bush has pointedly urged Ariel Sharon to halt an expansion of a key Jewish settlement on the West Bank, bitterly opposed by the Palestinians.

Anxious to maintain the momentum towards an Israeli-Palestinian settlement, President George Bush has pointedly urged Ariel Sharon to halt an expansion of a key Jewish settlement on the West Bank, bitterly opposed by the Palestinians.

Hosting the Israeli Prime Minister at his Texas ranch, Mr Bush backed Mr Sharon's plan to dismantle the 21 Israeli settlements in Gaza. But, in an unmistakeable reference to the Maale Adumim settlement, close to Jerusalem where Israel plans to build 3,650 homes, the President told reporters that he asked Mr Sharon "not to undertake any activity that contravenes the road map or prejudices final status obligations". (Bush calls for halt to new settlements as Sharon warns of 'civil war' in Israel).

Yep it seems that the commentariat who sneeringly dismissed Barack "Hussein" Obama as a proto Islamic warrior, a Manchurian candidate ready to bring down the United States, called it wrong. He's just George Bush in excellent Mission Impossible disguise.
Except of course they're still calling it that way right now.
... much of the rest of what the president said was damaging, wrong, and at times simply shameful.

His speech was rife with moral equivalence. (The Corner, Marc Thiessen).
Oh that'd have to be the same as what Henderson found in the speech, wouldn't it? After all, let's not quibble about equivalence versus ambivalence:
There was a similar ambivalence about the relationship between the West and Islam. The Cairo oration began with the assertion that this is a "time of great tension between the United States and Muslims around the world".
A time of great tension between the United States and Muslims around the world? Surely not. Why would anyone be worried about Islamic fundamentalists feeding off unrest about the United States. A time of great tension?
But is it? As a sovereign state, the US deals with governments, not people - and certainly not religions. Only about a quarter of Muslims live in Arab nations. In the Arab world, the US enjoys good relations with Egypt, Jordan, Kuwait and some other nations. The same can be said for the Muslim majority nations of Turkey, Indonesia and Malaysia. By focusing on prevailing tensions, Obama neglected to mention that, in recent memory, the US took military action in defence of Muslims living in Kuwait, Somalia, Bosnia, Kosovo and elsewhere.
That's right folks, the next time you step into the festering hole of the comments section of Tim Blair's or Andrew Bolt's blog, you tell them that everything is hunky dory between the United States and the Islamics. As  much as it can be, since it's only government to government, and nothing to do with common folk Arabs being restless.
Yep, the United States, it seems, is virtually Islamic, with an Islamic heritage president, good relations with many Islamic nations, and always alert and ready valiant warrior ever ready to act in defence of Islamics (even if it was a kind of government to government thing in Kosovo and certainly had nothing to do with people or religion). Oh Hussein, you doing good, dude.
But out of this blather, late breaking seeing as how Obama made his speech last week, and a lot has flowed under the bridge since then, what do we learn that's remotely new, apart from Henderson's ability to cultivate slights generated years before by the likes of a Richard Farmer?
In his Cairo address, Obama repeated his promise that Guantanamo Bay would be closed by early next year. Here Australia can make a contribution to the US relationship with Muslim majority nations by agreeing to accept some Chinese Uygurs who are currently detained in Gitmo.
Well there's a small mercy. In a bid to distinguish himself from the rest of the commentariat, Henderson speaks a moment of sense, in a column otherwise awash in a sea of words. Now accept that offering and let's not get caught up in whether the spelling should be Uygur, Uighur, or Uigur. In this smack down, it's Henderson v. Akerman and Albrechtsen, and who knows who'll become tag team champions and modish Hussein lovers ...

Wake me up when you the result. After reading late breaking Henderson, I always feel a snooze coming on.
Posted by dorothy parker at 7:43 AM

For reasons known only to him, President Obama avoids certain Bible verses:
Proverbs 19:10 (NIV): "It is not fitting for a fool to live in luxury - how much worse for a slave to rule over princes!"
Also Proverbs 30:22 (NIV) which says that the earth cannot bear up under "a servant who becomes king."

Yea verily and also
Don't cut your hair nor shave (Leviticus 19:27)
Don't wear clothes made of more than one fabric (Leviticus 19:19)
Don't let cattle graze with other kinds of cattle (Leviticus 19:19)
And if a man cheats on his wife, or vice versa, both the man and the woman must die (Leviticus 20:14)
But my personal favorite that he avoids is
He who spends his time trolling websites with bible verses is a gherkin who should be stoned to death by the community (Leviticus 24:14)

Careful, Dorothy, your blog is attracting the loons. And I have a personal belief that religous loons are the most dangerous. Or is that your sick intention?

All loons are welcome on loon pond but especially religious loons who troll the tubes posting weird comments. I did like one response at the Huffington Post when confronted by this racist tripe. "You do know that you are certifiably insane, right?"

You will know them by their fruits. Matthew 7:16.

And of course by their nuts. And by their fruity nuts. And the grapes they gather from thorn bushes, and the figs their thistles produce.

But I do love the idea of sick intention, if only I could work out how to sickly intend! Meantime relax, it's just another day on loon pond, and religious loons are best savored with a good wine and a bout of deviant sex.