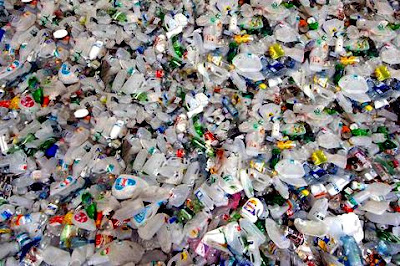 (Above: a glimpse inside Paul Sheehan's bowerbird mind).
Paul Sheehan. Can't bat, can't bowl, can't catch. Doesn't have a clue.
Not so long ago - April 13, 2009 to be precise - under the header Beware the climate of conformity, Sheehan published a screed proving conclusively that we'd be wise to heed Ian Plimer and forget the environmental cranks. He quoted Plimer approvingly:
"The IPCC process is related to environmental activism, politics and opportunism. It is unrelated to science. Current zeal around human-induced climate change is comparable to the certainty professed by Creationists or religious fundamentalists."
All in the guise of questioning orthodoxies and intellectual habits of course. The net effect of his column? Never mind the crazies, there's no way humans are having an impact on the climate of the planet, all's well, and just go on shitting in your nest, never you mind about anything. As an evidence-based attack on conformity and orthodoxy of course, including Sheehan's own, and a reminder to us all to respect informed dissent, and to beware of ideology subverting evidence.
Well it seems Sheehan only has to stand next to anyone to pick up a different opinion or perhaps a dose of orthodoxy or even swine flu. Because here he is, back bemoaning the state of the planet, and he's full of pious, sanctimonious concern about what he's just discovered, as he bemoans Fantastic plastic too good to waste.
In the midst of the northern Pacific Ocean is a liquid desert, a vast floating garbage dump, devoid of complex ocean life, prone to doldrums, seldom visited by fishing vessels, away from main shipping lines, and thus rarely seen by visitors.

It offers, by all accounts, a disturbing vision. Anyone sailing through this liquid dump will encounter, from horizon to horizon, concentrations of bobbing rubbish, in every direction, for day after day. Most of what is floating is not even visible, because it is plastic which has broken down into microparticles.
Lordy lordy so you can see the work of humans on the face of the earth after all.
This degenerating soup is much larger than NSW and Victoria combined. It is about the same size as Britain, Ireland, France, Spain and Portugal. It has been created by a giant spiral of clockwise ocean currents, known as the North Pacific Gyre, which carries human-created garbage that is slowly collected and consolidated by wind and currents.
Of course this kind of thing is interesting, like the wide sargasso sea, because it is visible. It's a pity Sheehan didn't spend some time in his past or present column on the issue of acidification of the oceans and its possible implications for seawater and for us - some benign and some not so nice. Won't someone think of the lobsters? (see Wikipedia here as a starter).
But of course acidification is invisible, and so much duller and less interesting.
There's nothing like a dance with the plastic fantastic muddling up the romantic sea to produce a flurry of words. Suddenly Sheehan has shifted from not giving a toss about the future of the planet to being a full-blown supporter of global environmental warriors:
The need for change is urgent.

Other floating garbage patches have been discovered in other oceans, and researchers estimate the total amount of marine waste in the hundreds of millions of tonnes.

The plastic is breaking down into tiny particles which are then mistaken for plankton, the building block of the ocean's food chain, and ingested by small marine life. Because of the global inter-connectedness of the ocean currents, the process could eventually compromise the entire ocean food supply chain.

Sheehan, it turns out, is inspired by Plastiki, backed by a terribly respectable eastern suburbs name (David de Rothschild) who just loves plastic but wants to keep it out of the oceans. And to prove it Rothschild's building a catamaran out of PET bottles, the same material used to make magic water storage bottles.
The boat will sail the oceans blue, in homage to Thor Heyerdahls' crossing of the Pacific in 1947 on the raft Kon-Tiki (which was built out of nine balsa tree trunks and similar to hand materials, as a way of proving South Americans could have colonised the Polynesian islands).
The Plastiki will end up in Sydney and a noble fate:
After it arrives in Sydney it will be dismantled and recycled, to show that plastic can be endlessly recycled and reused, and should live on in our lives, not in our oceans.

Meanwhile, please feel free to piss, spew, disgorge, and otherwise unload as much carbon into the atmosphere as you like. Because that sort of talk is just the work of quasi religious zealots. While talk of plastic bottles in the ocean is a dire emergency and we must do something about it. Like sail a boat made out of plastic bottles across the seas so people can understand it's a real issue.
Clearly Sheehan didn't catch up with Lisa Simpson in The Old Man and the Lisa, where she and Mr. Burns build the Little Lisa Recycling Plant to save the fishies, and Mr. Burns seized the opportunity to generate some tasty Little Lisa Slurry. It aired back in 1997.
Anhyoo, maybe if we built a blimp out of carbon it might draw Sheehan's attention to other human activities and their possible impact on the planet? Or perhaps it'll take environmental crazies acting like Bruce Dern in Black Sunday. Maybe blowing up the President at the Super Bowl will do for carbon what Sheehan is doing for plastic bottles?
Why is it that I always feel a little light headed, almost bubble headed, after reading Sheehan? He reminds me of a bowerbird accreting all kinds of shiny baubles for his nest of a column without a coherent thought as to how they all might go together when assembled for display.
Meantime, the Labor party through its machinations bestowed Senator Fielding on us, and he's just discovered solar flares. There's plenty of sludge going around, and it's not just in the oceans ...
(Below: the Little Lisa processing plant for plastic bottles and fishies interested in becoming handy slurry). 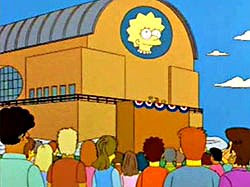