Janet Albrechtsen, the unfortunate rich, the envy gene and the brutish real world of the taxman 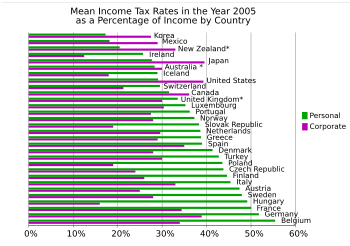 (Above: unhelpful rich bashing OECD data devised and published by communists or at least bureaucrats)
It's time, in this brave crowned republic, where every one is already a liberated republican, to conduct a new campaign for freedom and St. George.
It's time to end the persecution of the rich.
Now I know you socialists out there - you pinko commie perverts - possibly think the rich aren't  persecuted, but then you probably think you live in a constitutional monarchy.
And the first refuge of scoundrels of your ilk is to bring up is Kerry Packer and his assorted companies, and the way KP himself devised ways to pay as little tax as he could personally, while his companies embarked on various schemes to ensure that they also minimized their exposure to the harmful effects of tax - which can indeed exceed the impact of smoking on your health.
But of course Mr. Packer went on record to explain that his companies had over a decade paid a couple of billion to the government in the way of fees, charges and taxes, while he personally had always paid what his accountant told him to pay.
But this doesn't sort the basic problem. Why should you care about what the rich pay, and in any case why should the rich pay anything? After all, when they employ servants, lick spittle lackey slaves, and corporate yes persons, the benefits trickle out and down in society in extraordinary ways.
You should be grateful, you wretched mug punters, to lick the toes of the sumptuous leather boots the rich can afford, and tug your forelock as generations before you have done, preferably from a supine position of craven inferiority.
Now, now enough of that, rise to a kneeling position, and listen with me as we join Janet Albrechtsen in a paen of praise for the value of the rich to society, and the disastrous way the world would collapse if you piggish socialists had your way, and it's fittingly called A nation of paupers. For indeed that's what we'd become if you touch a single hair on the fabulously wealthy:
There are logical reasons hitting the rich, while satisfying the envy gene, does nothing for the economy. The wealthy can, and do, migrate. Those who stay may be more determined to avoid tax (including by working less). And remember, too, that you won’t find rich people locating to a high-taxing country.

That's right, you envious socialists, don't expect the rich to work or live amongst you if you punish them with your childish spite. Why it's just the same as climate change, and there's a knock down argument for you:
When pundits start framing tax reform in moral terms, you know something’s awry. Their belief in taxing the wealthy has become an article of faith, not a matter for rational analysis. Just as with climate change, those who treat tax as the greatest moral issue of our time will necessarily regard arguments for any limits as immoral. Thus, if you regard progressive tax as a moral imperative, then you can never hit the rich hard enough with higher taxes because every hike makes the system more progressive and, therefore, more morally right. On the flipside, any tax cut or tax break for the rich must necessarily be derided as immoral.

And the sorts of flat tax rates apparently suggested by economist Henry Ergas in his review for the Liberal Party represent the ultimate in moral turpitude. Never mind that flat taxes have helped former communist countries such as Russia and the Baltic states stage a Lazarus-like economic recovery.

And never  mind that the Baltic states and Russia are at the moment totally fucked, and need a new Jesus to turn up to help Lazarus stay in the land  of the living (Baltic states face harsh economic hangover in 2009). What's actual economic data or reality got to do with anything when we're talking  moral turpitude.
But no, you pinko perverts don't understand, we're talking about the divine right of the rich to stay rich, and not to be tortured about being rich. Being poor of course you don't understand, but it's a huge burden to be rich, and no one ever gives you a break.
Laurie Oakes boarded the same moral indignation train when Malcolm Turnbull committed the political sin of appearing on BRW’s rich list a few weeks back. Oakes thought he had found the ultimate “gotcha” moment when he asked the Opposition Leader how he could possibly support maintaining the private health insurance rebate for high-income earners when he was so rich. In other words, the rich never deserve tax breaks of any kind.

Sob. Never a break. Of any kind. And down to the last squillion! And now greedy, unthinking politicians are joining in on the bandwagon, soaking the rich like they're some  kind of cheap dollar sponge, rather than a genuine sponge raised from the Greek sea by traditional Kalymnos Island craftsmen dedicated to giving the rich a soft as silk personalized sponge down.
To be sure, it must be politically tempting to run this line. After all, how many votes are you going to lose by soaking the rich? Hence, governments weighed down by deficits and debts are doing just that. Gordon Brown’s Labour government in Britain has raised its top tax rate, overturning Labour Party policy not to raise taxes. In the US, the Obama administration may do the same, following a swath of US states that have raised income taxes on the rich in recent years.

Oh not the American rich, say it ain't so. How will they ever afford an illegal Mexican servant, or the seventh bath room or the fiftieth guest room?
What's left for Albrechtsen and the rich to do when confronted by this mean spirited selfishness? Well it's true you socialistic wretches can mount little more than an infantile cri de coeur, a barely disguised envy yelp, but that should at the same time help you understand that the rich are equally infantile and given to barely disguised yelps about suffering and poverty.
Alas, in the brutish real world ... If you raise the taxes of the wealthy, you can expect tax revenues to fall as the wealthy change their behaviour. It is hardly novel to point out that raising the tax on a packet of cigarettes will change behaviour. That’s why governments tax cigarettes. People may smoke less or even give up. Same with taxes on alcohol. Why, then, doesn’t the same logic apply to raising income taxes? In other words, the disincentives from paying higher taxes may mean that those we rely on most to fill up the tax coffers may stop doing so.
That's right, pauperdom here you come while the rich look after themselves and fuck you Jack. Look what happened in Britain when the Labor government turned the Rolling Stones into tax exiles and The Beatles sang a song about the taxman, a devastating critique, a devastating indictment of the limits of progressive taxation.
Now you might think, along with Hal G. P. Colebatch that in fact the decline and fall of Britain can be pin  pointed to the precise time that The Beatles and color television banished umbrellas and bowler hats from the land, but I urge you to think again. Pop singers are in reality just long suffering rich people, members of the new aristocracy, and they always threw colour televisions out of hotel windows as a way of expressing their monarchist sentiments.
So settle down you socialists. We don't want the rich in Australia high tailing it out of Sydney and Melbourne to live in Alice Springs, or worse to set up their own Hutt River province, as they do in America by fleeing New York to live in Texas (in one notorious ghetto in Austin all you can hear is the yabber of that hideous Queens accent).
This is as true in Australia as anywhere else. As the Rudd government confronts the question of how to pay off decades of debt, inevitably there are calls for tax rises for the rich. That would be a grave mistake. Arguing against tax rises for the rich is not about defending the rich. They can look after themselves. This is about looking after the rest. The smarter approach is to aim for that level of progressivity that maximises the overall tax take, including from the rich. I don’t pretend to know precisely where that point is, but I do know that going beyond that point - although politically tempting - would revive the Beatles’ cry: “Yeah, I’m the taxman. And you’re working for no one but me.”
That's why this site is joining with Albrechtsen in a land mark campaign to end the soaking of the rich:
1. No tax rises for the rich.
2. Anyone with over a million a year income not to be taxed at all.
3. A vigorous campaign conducted in the international press urging rich Australians to return home. Having been forced to flee by ill mannered socialist pinko perverts, they should now return to specially set up gulags for the rich in which they can roam freely in care free bliss. Barricades will be installed at Bondi junction to prevent harassment of the rich in the eastern suburbs.
4. A vigorous domestic campaign in the Australian press urging the rich to keep working so they can shift from ordinary rich to filthy blood sucking rich, while keeping our major cities safe as a haven for rich folk.
5. Compulsory medical examination of all Australians and where an envy gene is discovered, for it to be forcibly removed, either by therapy or by a quick, painless operation.
6. Anyone who believes in climate change - as a quasi religious delusion - to be quizzed about their attitude to the rich, and if it is replete with moral indignation, these unfortunates will be shipped to Van Diemen's Land, or possibly Norfolk island.
7. Anyone with over five million in assets to receive a free Greek sea sponge, as a symbol to show that Australia will never soak the unfortunate rich so long as Australians can sponge off them. (Spats could be offered as an alternative for men).
That should do it, that should show the rich how much we love them. Then the Beatles can sing some revised lyrics. Yeah, I'm the rich man, and you're working for no one but me.
Posted by dorothy parker at 8:19 AM