Piers Akerman, that fake email (again), and farewell to a nice man 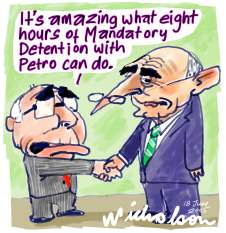 What a nice man Petro Georgiou is. There's something immensely attractive about a man willing to shed a tear about the way the federal parliament has legislated inhuman treatment of human beings, as he did in parliament yesterday.
Sure it was the Labor party that enacted that which is about to be retracted, and then toughened by the Liberals under Howard, and we now have the bizarre spectacle of Liberals who suggested in committee amending the legislation now lining up to vote against it, but Georgiou has acted like a solid rock, a man with principle, throughout this dark chapter.
Not that you'll read much about it today (try 'Dark chapter': Georgiou to cross floor on asylum bill' if you're interested). The treatment of refugees is so yesterday, an under the carpet issue, but it's reassuring to come across a Liberal with old fashioned liberal values, and a dash of compassion.
Time to watch the jackals tear off his flesh piece by piece. Oh wait, they've already tried that back in 2006 when a flock of Queensland frontbenchers - not content with thrashing NSW at rugby league - backed Joshua Frydenberg's challenge to Georgiou at the preselection convention. Come on down Ian Macfarlane, Peter Dutton and Santo Santoro.
Last year Georgiou announced he would resign at the next federal election. Too good and too human and too caring for politics. Still, if it's any consolation to him, he can park his slippers under my bed, or perhaps we could slip off to Argentina for a wild affair.
What? That's only for Republican governors of South Carolina dedicated to family values and impeaching Bill Clinton for a blow job?
Oh never mind, what else is troubling the commentariat columnists on loon pond this cold winter's day?
Sob, I can feel catatonia creeping into the brain, because by mistake I opened up Piers Akerman's column with the poetically rural header Shut the gate and get the truth before the ute bolts.
Lordy, lordy, can you believe it? Our favorite, the fat owl of the remove, still seems to believe there's juice in the utegate scandal for the Liberal party - as if somehow his previous calls for openness and transparency somehow shouldn't apply to Malcolm Turnbull and his Liberal party colleagues.
On and on bangs the fat owl like a barn door in a gale (keeping that rural metaphor alive), as if he's trying out for the role of the kid in The Tin Drum.
What a noise and a shrieking, and what a series of penetrating questions he asks, but forgive me if I don't canvass them all, since this exercise in tedium is now so tedious, that as Macbeth put it, we are now so steeped in fish and chips wrapping  that should we wade no more, returning were as tedious as go o'er.
But there's minor pleasure to be had in the way Akerman thrashes about and flails around, seeking any target at all, provided it's not the obvious question of why Malcolm Turnbull was dumb enough to run with a fake email and shoot himself in the foot.
No, no, suddenly it's all the fault of Treasury officials and the AFC and their running commentary. Akkers also maintains his pious pleas for decency in politics:
Trust depends on openness and transparency. Was the muzzling of a public servant last week contempt of Parliament?
Openness and transparency? Would that be why today I'm reading a story with the header Turnbull claims privilege as insults fly?
Malcolm Turnbull hinted last night he would resist police attempts to investigate links between the Coalition and the public servant Godwin Grech as part of its investigation into leaks from the Treasury.

Mr Turnbull said he would co-operate with the investigation into the fake email at the centre of the OzCar affair but baulked at helping with the wider probe.

"There are whole issues of parliamentary privilege here," he told ABC1's The 7.30 Report.
Or perhaps issues of getting caught with your fingers in the cookie jar?
And of course it would be remiss of the fat owl if he weren't able to find a general culpability in the ACT, and the political and media classes.
In the world beyond the ACT this fiasco underscores the detachment of the political and media classes from the electorate.

An absurd amount of time has been given to this matter, the Government has the opportunity to put an end to the speculation. It may be impossible to inoculate MPs against mid-winter madness but it should not be beyond the capacity of the Government to address this lapse in parliamentary practices.
About the only thing he got right is that an absurd amount of time has been given to this matter. And unfortunately because Turnbull is such a stumble bum, much more time will now be devoted to it, as the Labor party sees an opportunity to smear their opponent for being an impetuous clod hopper.
Which brings me to the one decent moment in the whole affair, and that's the sheer cheekiness and effrontery of our local member Anthony Albanese comparing Malcom Turnbull to a former leader of the federal Labor party, one Mark Latham, known as mad dog Mark in some circles given to vitriolic abuse (not shared by this site of course).
Albanese made a meal of it, crying out how taxi drivers lived in fear and thanked the lord for Comcar:

I could have sworn I was witnessing the ghost of Mark Latham. It was all there, jaw jutting out, all the fake aggression, all the machismo, all the 'We're going well'.
It almost deserves a donation, or at least an entry fee. Shouldn't class clowns get a reward when they send the teacher up so well?
I'm afraid up against that kind of effrontery, Piers Akerman sounds like Billy Bunter wailing about the loss of a jam tart. There's a lot snarling and sullen gnashing of teeth, but while hot air might float a balloon, it doesn't do much for a newspaper column.
Give it away Akker dakkers, and join the new campaign to get civilized people like Petro Georgiou into the Liberal party. It might put an end to the current shenanigans, and it would certainly help you in what can only be seen as a descent into bathos (you need more than a fake email to get into pathos or tragedy).
(Oh and one final thought. The more you go on about Chairman Rudd's - or his wife's - millions, Akkers, the more you remind people of Comrade Turnbull's squillions. Stop it, or we'll all go blind).
(Below: class clown and attack dog Anthony Albanese, who in these post Jane Austen days can be described as my local member). 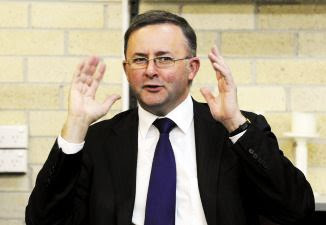 Posted by dorothy parker at 8:06 AM