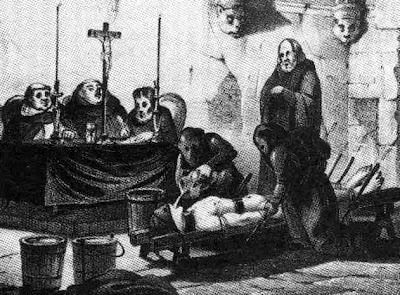 (Above: problems with structuralists, feminists, gender theorists, post colonialists, determinists, deconstuctionists, relativists, revisionists, communists, and other deviant post modernists sinisterly lurking in deviant fashion in your neighborhood or school? Show them some Christian love).
It's been an exciting week in loon pond, but there was a breathless hush in the close when the fustian tones of Giles Auty filled the air with a cry of despair, in The Left is killing religion.
Dear Giles bravely took as his task acting as a Greek chorus to the doom laden voice of Hal G. P. Colebatch, and his announcement that the infidels had stormed the UK body politic:
By an odd coincidence, Hal G.P. Colebatch's excellent article "UK bill an attack on faith" appeared in yesterday's The Australian about five days after I had the pleasure of delivering the annual St Edmund Campion lecture at Sydney's Campion College.
Colebatch's moving piece explained why it may soon become illegal to hang a cross in any Catholic school in Britain and asks advisedly what sort of intolerant world postmodernist totalitarianism is creating.

Anyone familiar with Elizabethan history in Britain may recall that Campion was tortured and executed in 1581 for trying to keep alive the old faith - Catholicism - in Britain after Henry VIII's historic rift with Rome in 1533.

The substance of my talk, which was called "Are we truly evolving? Reflections on the life of an Elizabethan saint", touched on the creeping influence of postmodernist totalitarianism throughout the Western world rather than only in Britain.
What a splendid yowl of despair, but I'm not quite sure of the point being made, since somehow it seems to equate the rollicking Henry VIII with postmodernist totalitarianism.
Which is a bit tragic for the postmodernist totalitarians because they haven't got a decent set of gear for dealing with troublesome tykes. No rack, no wheel, not a knee splitter, thumbscrew, foot roasting or burning at the stake in sight. Jeez, Henry was so lucky, as well as so advanced in his thinking. Relativism in relation to wives and religion.
Postmodernists lack imagination along with the equipment. But martyrdom is still freely available for the paranoid true believer in these dark, unholy times:
Anyone who has read Evelyn Waugh's biography of Campion will understand something of the extraordinary heroism through which he and scores of other martyred priests - plus thousands of devout laypeople - struggled to keep what they regarded as the true, historic Christian faith alive in Britain.

Now, instead of finding itself persecuted by Elizabethan spies, informers and hangmen, Catholicism finds itself under severe assault from the self-righteous, politically correct social engineers of Britain's political Left.

Yea verily, soon the Catholic church will have to go into a kind of underground, a V for believers, a French resistance where they devise methods to take out their relentless post modernist totalitarian foes before their foes can wipe them from the face of the earth. Martyred saints and priests will litter the streets, but they will struggle to keep the true historic Christian  faith alive.
Truly it will be righteous, but not of the self kind, and politically incorrect, because correctness is by definition incorrect.
Already Christianity in all its forms is treated with increasing contempt in societies that basically believe they have evolved and so distanced themselves from what they imagine are the old-world superstitions - and attendant moral constraints - of their past.
No never. Bring back the inquisition and indulgences I say, and as for that Galileo, retract that apology and let's get back to some real science. Discovering the exact location of the Garden of Eden and the whereabouts of Noah's Ark for a start, not to mention the ark of the covenant.
But even if we re-make the world into medieval pre Henry the VIII bliss, never discount the deviant nature of the new foe, because you see it's exclusively human:

Postmodernist ideology is an exclusively man-made - and, of course, woman-made - ideology that finds no basis whatsoever in any traditional human system of belief. Until the advent of postmodernism, communism was Christianity's most persistent and relentless recent foe.

Now postmodernism in all its largely Marxist-inspired guises - political correctness, gender theory, feminism, post-colonialism, determinism, deconstruction, relativism, structuralism, historical revisionism - has become a stealthier and thus even more sinister adversary that flourishes, generally unremarked, in our midst.
Human! Instead of a burning bush carving out ten commandments for Charlton Heston. Or was that a set of golden plates handed over by angels and returned thereto to Joseph Smith? I can get terribly confused in a relativist way when thinking on these things.
How much better the world would be with political incorrectness, and colonialism and undeterminism and constuctionism and unrelativism and destructuralism and revisionism of historical revisionists.
Oh they're sneaky, sinister and stealthy, no doubt about it, and they lurk in our midst. Pretending they're harmless, like a cancer in the body or the body politic. Doomed to hell every man - and woman - jack of them, preaching the secular heresy.
Why oh why can't we return to the days of Victorian England, when women knew their place and men had their rightful place, and the fuzzy wuzzies did what they were told. You know, I think the fault is most likely all this democratic nonsense. It was so much better in the old days when the working class knew that they had to doff their lid to their lordship, mind their manners, keep their place and not speak out of turn:
Why has Western society, with all its proud history, generally allowed such an abject internal collapse?

American Roger Kimball, who is one of a number of international cultural commentators with whom I have corresponded through the years, explains the whole matter as well as anyone: "In a democratic society like ours, where free elections are guaranteed, political revolution is almost unthinkable in practical terms. Consequently, utopian efforts to transform society have been channelled into cultural and moral life.
Yes, those damned utopian efforts to transform society. Such an irritant. Unlike that utopian effort by Christ to transform society, which was regrettably channelled into cultural and moral life. Damn you, you utopian delusional democrats, damn you all. It was so much better when Christ's message could be hijacked by a church and used to build an empire for, by and of humans.
As for the American Civil War, you might happen to think that had a slight impact on the country. But it was nothing, nothing I tells ya, up against what these fiendish souls and their cultural revolution has wrought on the world. Why up against a hypocritical Elmer Gantry preacher, the Satanists are winning hands down:
"In America, scattered if much-publicised episodes of violence have wrought far less damage than the moral and intellectual assaults that do not destroy buildings but corrupt sensibilities and blight souls. The success of America's recent cultural revolution can be measured not in toppled governments but in shattered values.

"If we often forget what great changes this revolution brought in its wake, that, too, is a sign of its success: having changed ourselves, we no longer perceive the extent of our transformation." These wise words are taken from Kimball's The Long March.
Wise words indeed. The world has changed for the worse, no doubt about it, especially as the last round of crusades hasn't gone so well, not that these isolated episodes of violence can have as much impact as a vile secularist speaking out - like that drunken fool Christopher Hitchens.
We're doomed, no doubt about it, and it's all because some of these fools no longer believe in counting the number of angels that could fit on a pinhead. But before we go any further, can you please look down and feel your underbelly.
Is it soft? Is it flabby? No, I'm not worried about your exercise level or your intake of Coco Pops, I'm worried about your soul:
Postmodernism corrodes society largely through assaults on its soft underbelly, principally through the effective hegemony it has created in the arts, education and culture generally.

Perhaps its most damaging corrosion has been through the politicisation of public education at the tertiary, secondary and even primary levels.

In Australia, generations of children have effectively been abducted from the influence of their parents, who often have little or no say in what - or how - their children will be taught.
Eek. The children have been abducted, taken to a remote communist camp in the foothills (I have direct evidence of these camps lurking in the Blue Mountains) and re-educated into deviant Marxist post modernist thinking with special feminist training for girls and revolutionary post colonial fervor for boys. And it's all done through the underbelly. No, not the tits on view in the TV show - though that in itself says everything you need to know - but in the flabby thinking of people who don't understand the benefits of wearing a cilice - on body and in mind - on a daily basis. Loved be  pain. Sanctified be pain. Glorified be pain.
Oops, don't know where that came from, the tits and the pain. I can sense the mind parasites are already in my head, the post modernists somehow slipped them in through my ears. Quick someone bring me some aluminium foil.
But back to the wrap up by Giles:
Now, as Colebatch makes clear, the postmodernist Left is intent on wiping out the remaining pockets of resistance that exist in private and religious schools.

I hope I am not alone in regarding this as an insult to the basic principles of democratic life.
No, don't even think it Giles. Of course you're not alone. We here in loon pond are fully supportive. There are any number of us who know the agents of doom walk stealthily amongst with steely hypocritical smiles, as they work to bring down western civilization as we know and love it.
Let's face it: Henry VIII, Oliver Cromwell, Martin Luther, John Calvin, communists, Islamics and post modernist feminist post colonialist structuralists are one and the same.
Now if you'll excuse me, I feel somewhat faint and fearful that might be a feminist knocking at my door. Must draw the curtains and retire to bed while the men have their ports and cigars and worry about the future of the empire ...
(Below: the good old days, when reactionary relativists couldn't mutter about the Geneva convention). 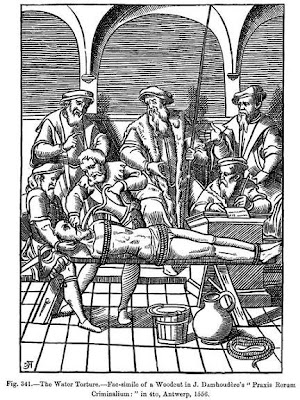 Posted by dorothy parker at 8:01 AM

If this essay by Auty were submitted as course work to one of the professors or lecturers at Campion College I wonder what kind of grading they would give it?

Especially as Campion promotes itself as a place of intellectual rigour and deeply reasoned argument.

I would suggest an F triple minus.

But darling, didn't you know?

In fact anyone with a notch of substance and who thinks that Catholicism is a religion with certain principles - such shocking things as Christ as God.

The students sure as hell liked Auty's speech.

Now that is shocking.