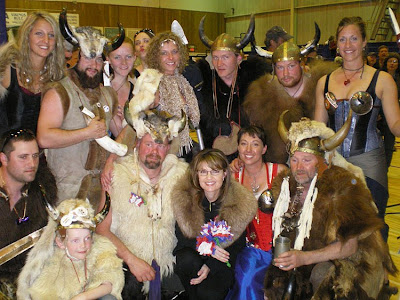 (Above: Sarah Palin and friends, attending the Little Norway Festival, Petersburg, Alaska, 2007)
Over at Blair's blog, Tim and the gang are still reeling, mystified, bemused, shocked and appalled by the death of Michael Jackson.
Sorry, scrub that, by the strange resignation of Sarah Palin.
It must be reminiscent of those dark days when they learned that Pauline Hanson wasn't so much an adept preparer of fish and chips, as a prime piece of flake.
But hope still springs eternal, and Tim is muttering darkly about the unconscionable suffering of the Palin camp, dastardly liberal bloggers and Legal Options Explored.
The reason(s) for Sarah Palin’s resignation is (are) still unknown. Naturally, leftist bloggers assume it’s due to her soon-to-be-exposed evil. Palin’s lawyer Thomas Van Flein puts them (and others) on notice.
Take that you dastardly rumor mongering liberal bloggers. But strange isn't it that the reasons are still unknown. Didn't Palin give a long incoherent rambling and quite bizarre off the cuff talk to assorted news cameras explaining the assorted and sundry strange reasons she decided to resign?
Unless of course she can't say what she means, or mean what she says.
Guess it was all too abstruse for Tim to decipher. Or maybe it's because his goddess was saying the words he couldn't, didn't want to hear and process.
Ah well, some kind person emailed me a couple of top ten reasons why Sarah Palin is resigning, but left off the names of the people who created them, so apologies for that, to these unknown humorists, but that'll teach you for trying to get in ahead of that arch fiend and alleged comedian, that vile liberal talk show host David Letterman, whose persecution of poor Sarah is likely the strongest reason of all she could no longer put up with the wretched liberal media (well it certainly got up the righteous nose of Tim Blair).
Anyhow, open the envelope. Yes Tim Blair, the unknown reason(s) is/are:
10: She wants to move to a larger state.
9: She has an unexplainable urge to have one more child and name it Qwerty.
8: She lost directions to state capital. Too embarrassed to ask for new map.
7: She supplied toxic make-up to Michael Jackson.
6: Dancing with the Stars called.
5: She's been ordered to return to home planet to give report.
4: She can see a mountain of neglected paperwork from window.
3: The secret identity job too time consuming. Blunder Woman costume is gathering dust.
2: She needs time to prep for 2012 Couric interview.
1: “Been there. Done that. Nailed it!”

10. She's pregnant again and is having John Edwards' baby.
9. She's "hiking the Appalachian Trail" with Mark Sanford.
8. She wants to spend more time teaching abstinence to her family.
7. She's joining the cast of "I'm a Celebrity, Get Me Out of Here!"
6. She wants to spend more time watching Russia from her house.
5. She wants to devote herself full-time to making comedians apologize for all the new jokes they're going to tell about her.
4. Her daughter Bristol actually IS having Alex Rodriguez's baby.
3. She's taking up Playboy's offer to pose nude as part of their upcoming "Governors Gone Wild" issue.
2. She came to the end of the Bridge to Nowhere that is her political career.
1. She didn't resign at all. It was an elaborate hoax pulled off by Tina Fey.
But I'm guessing one thing, which is that like a bad smell, Palin will keep hanging around with delusions of grandeur, her 'you wont have Richard Nixon to kick around any more' moment followed by a Barry Goldwater-like quest for ultimate power.
If she treats America the way she's treated Alaska - resigning half way through her first term whining about everything and everybody persecuting her, and running away from the job she was elected to do in a completely half assed way - then the lord help America, because Sarah Palin surely won't.
By now I'm sure you've caught up with Todd S. Purdum's hatchet job It Came From Wasilla in Vanity Fair, but really if you're going to get upset about a blogger photoshop job, or a few words in a liberal trendy latte sipping magazine, or a miscued Letterman joke (which he dined out on for weeks afterwards in a series of apologies), you're better off out of the game. In America, it's not just words, it's sticks and stones in a tough game where the extremes are ... well, extreme. (Unless of course you think Beck the TV show man - not Beck the singing scientologist - is an ocean of sanity in a crazy world. By the way, been for a check up of the old noggin recently?)
Seems like Blair's finding it really hard to let go his goddess with her feet of clay (and a brain of straw?), finding hope in ways suggested by Bill Quick that she might continue a career in politics - by becoming an even more eccentric, alienating and divisive figure, who smotes lefties and liberals mightily:
Ignore the mainstream media and the Democratic party. Define herself on her own terms. No more chat-fests with the likes of Katie Couric. No more efforts to make herself likeable to enemies whose only wish is to see her career—and conservatism itself—destroyed.
Well why not just ignore all of America - not just the half who voted Obama into power - and make herself throughly unlikeable, and view the world through the wrong end of a paranoid telescope that just wants to see everything and everybody as enemies to be destroyed?
Really when you're locked in a bubble boy world, it must be hard to understand Seinfeld or comedy in general.
Why am I reminded of bubble boy in this critical time in American political history? Well even in her rambling farewell for the moment, Palin couldn't get her facts right, choosing to end her statement with words she attributed to General Douglas MacArthur: "We are not retreating. We are advancing in another direction."
As dozens of commentators have now pointed out, it wasn't MacArthur, but General Oliver Smith, talking about his decision to march the cut off and nearly surrounded 1st Marine Division through 55 miles of difficult weather and rampaging Chinese to the port city of Hungnam during the Korean war.

It's just another Moop moment for Palin, proving she'd have been a great substitute for George W. Bush:
DONALD (Bubble Boy): OK, HISTORY. THIS IS FOR THE GAME. HOW YA DOIN' OVER THERE? NOT TOO GOOD!

DONALD: THAT'S A JOKE. THE MOORS.

GEORGE: Oh, Noooo, I'm so sorry. It's the MOOPS. The correct answer is, The MOOPS.

DONALD: MOOPS? LET ME SEE THAT. THAT'S NOT MOOPS YOU JERK, IT'S MOORS. IT'S A MISPRINT.

DONALD: IT DOESN'T MATTER. I'S THE MOORS. THERE'S NO MOOPS.