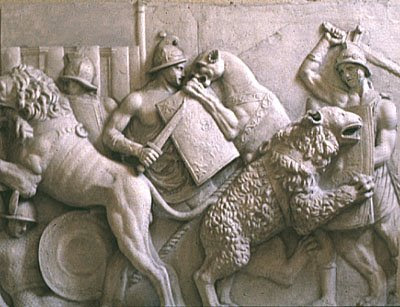 (Above: gladiators going at it with monster sheep).
We rarely do sport on this site. The turkeys take up way too much space already. But the chance to demand a smack down between two Murdoch hacks is irresistible.
Righteous smug up himself Patrick Smith in The Australian on the punch up at the end of the rugby league state of origin and how Origin biff leaves rest of us cold:
No action will be taken against White, no matter that his blow forced Price to be driven off the ground, senseless, with his neck in a brace. As Ray Warren explained to Melbourne radio audiences yesterday, that's quite the done thing in rugby league.

That may well be the case, too, because talkback callers with a rugby league background thought the description of the incident by Queensland coach Mal Meninga was insightful.

That Origin was a confrontation driven by fierce hate and one-on-one punch-ups were well and truly within the code of conduct as understood and adhered to by the players. And officials.

But to the rest of Australia this was more than a bit of Origin biffo. It was an act that spoke with great clarity about the future of rugby league outside Queensland, the ACT and NSW. It ain't happening.

Blood crazed gladiator loving Luke McIlveen - the man who loves to run bicyclists off the road -in The Punch, home to Australia's thickest conversations, on Savage dead rubber that breathed life back into league.

There are certain things you’re supposed to say when people ask what makes you proud of your home state. Nice things like the shimmering Harbour, the Opera House, the SCG or the Olympics.

I would trade them all for the bloodied grin that Brett White gave Justin Hodges in the moments after knocking out Steve Price on Wednesday night. As the flashy Hodges ranted about payback, positioning himself behind bigger teammates, White simply poked out his bloodied tongue and smiled, mocking Hodges for the pea-hearted, adolescent sook that he is.

At that moment, NSW hearts swelled with pride. Until then, we had almost forgotten the things that make the Premier state better than Queensland. Like having a first-world economy and houses made from bricks.
When Brett White landed that magnificent right cross, he struck a blow for every NSW fan who’s been bailed up in a pub by a pissed, red-headed Queenslander dribbling on about their superior passion and commitment to Origin.

Conclusion:
Smith and the deluded AFL are so far up themselves that they can even manage to get righteous about letting Barry Hall run around for years in best thuggee style, and then finally get even more righteous by saying that enough was enough. Not to mention that their particular brand of footy show features "Sam" Newman, possibly the most offensive turkey on television. This at the same time as Smith babbles on about the beating of a man in a fast food outlet in Melbourne? Which has what to do with anything, except the danger of ordering fast food n a state dedicated to AFL? Never mind, for Smith the match was "just another slash of the knife in what has become rugby league's year of unprecedented self-harm".
While McIlveen displays a taste for blood that is faintly disturbing even in a journalist who might want to worship the Emperor Caligula as a sports lover. "His work was done the moment the Medicab carrying his opposition front rower left the field." Wow, and a glassing means I trooly rooly loves ya.
Okay, here's the deal. Into the new super boxing HD program on One with the pair of them, with chairs and tables allowed as props, as you'd expect in a smack down, with the last still standing to be hailed as being in the right.
Result? At least one less crazed Murdoch sports journalist chewing up precious space on the already full to overflowing intertubes. And if it's Luke McIlveen, cyclists can feel safe that this road vermin hating journalist has been taken out by a good Barry Hall type thump to the jaw.
I won't be watching of course - I've taken to watching pimply kids with braces win five hundred thousand euros in poker games - but the thought that footballers might destroy themselves can only be enhanced by the notion that football journalists can follow in their footsteps.
And that's the last we'll mention of football, at least until the next glassing or motel incident precipitates some community concern about the blockheaded nature of footballers and brings out the feminist in me.
And why is football so problematic? Just read the sporting journalists and all will be clear ...
Sigh, now we have to renovate and extend loon pond once again. But if we allow sports writers in, we might actually have to designate the entire Pacific Ocean as a haven for loons ...
(Below: meantime, something for the more genteel gentleman who might consider taking his fair companion out on to the road this weekend on their vélocipède knowing that the roads are safe as Luke "Road Vermin" McIlveen prepares for his big bout with Patrick "the Saint" Smith). 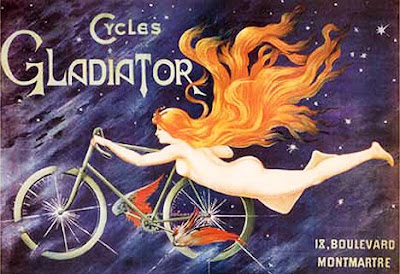 Posted by dorothy parker at 2:41 PM