Tim Blair, turning feminist, arguing about the burka, and more News Limited content for a public eager to penetrate a paywall 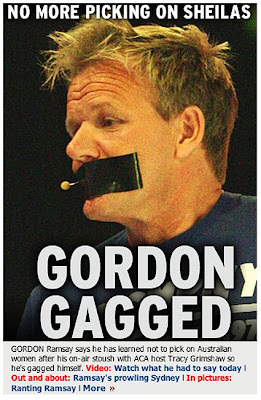 (Above: continuing our exciting series on News Ltd content we'd love to see behind a paywall).
You could have knocked me down with a felafel or a tabouli.
Tim Blair has turned into a feminist. A lover of western feminist values.
Fuck me dead. Next he's going to turn into chardonnay sipper, or even part of an inner western elite. Who knows, he might even turn green. Or go watermelon. Green on the outside, and red inside, replete with dark pips of multiculturalism.
I don't keed, I don't keed. Why under his item Sack the Shroud, he provides a link to an ABC newsreader in an approving tone. In which she demands the burka be banned, an antipodean Sarkozy.
An ABC newsreader!
Even now I'm stumbling through the haze like an earthquake victim.
The winning sentence?
Read on. Like Andrew Bolt, I prefer argument to banning – still, it’s an impressively strong statement of Western feminist values.
Think this is just a bit of Islamic bashing, on the basis that the enemy of your enemy is a friend?Better a western feminist than an Islamic in a burka? No, nothing like that:

UPDATE. Those inclined to the belief that Haussegger is reflexively anti-Islam should note that she launched Irfan Yusuf’s book in Canberra only a few weeks ago.
The tragedy? What a wimp Blair is. What a soft marshmallow. "I prefer argument to banning".
Upstaged by a feminist ABC newsreader.
Come on Tim. Don't hide behind Andrew Bolt's feeble skirt. Announce a campaign to ban the burka. Do a Sarkozy. Show you've got the western feminist balls of an ABC newsreader.
Guess he's softening his views to conform to John Hartigan's vision of fair and balanced News Limited blogs.
UPDATE 1: Now Tim Blair has published a link to someone asking the question whether America should ban the burka. And with a quick flick pass he sells the dump to someone else. Come on Tim, should Australia ban the burka? Yes or No? How cheese eating surrender monkey are you feeling today? Or is it just too hard to admit the French have a point? Meh, some feminist you turned out to be.
(Below: more News Limited content we're hoping to see locked up behind a paywall, with it slow to dawn on The Advertiser that big boobs might have something to do with breast feeding. You can catch the full joke at Crikey, thanks to Nicola Heath as she celebrates News Ltd's dedication to original, exclusive, highly relevant and genuinely useful news for their audience. Women, be alert but not alarmed. Breast feeding could lead to bigger boobs. Is that useful news, or what. Feminists to the right of them, feminists to the left of them, on rode the five hundred). 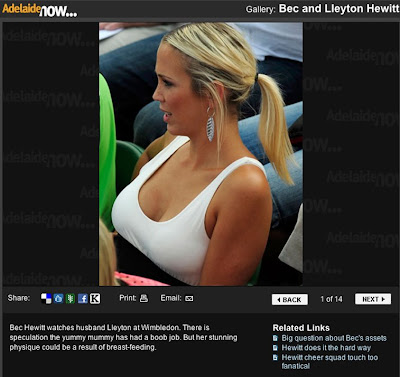 Posted by dorothy parker at 3:11 PM

''Micklethwait and Wooldridge are interested to find that the form of Christianity having a lot of success around the world now is American Protestantism, often known as evangelism.''

I can't believe you repeat this terminological howler. It is Evangelicalism - evangelism is the preaching of the gospel, and is done by all forms of Christianity.

Meh. It's too long a word for too bizarre a kind of Christianity.

More to the point, are you for the banning of the burka, and all other kinds of religious dress in public places?