David Penberthy, John Hartigan, Punch, Crikey, and who's got the biggest dick 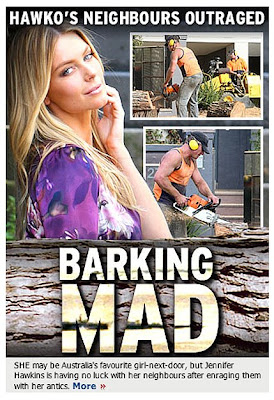 (Above: another in our series of excellent splashes showing how News Ltd is paving the way in quality journalism, exemplars of John Hartigan's love of ground breaking stories).
Trolling is one of those long standing traditions in the intertubes that's likely never to go away.
Anybody can do it, and even late breaking punters arriving on the scene in a belated, breathless fashion can take to it like a duck to water, or a loon to a pond.
Take The Punch, that half arsed assembly of columnists and borrowed content, which was rightly damned by John Hartigan as an example of what's wrong with the intertubes (John Hartigan address to the National Press Club):
Then there are the bloggers.

In return for their free content, we pretty much get what we’ve paid for - something of such limited intellectual value as to be barely discernible from massive ignorance.

Oh sorry, he wasn't talking about The Punch, which is just a blog, so much as talking about all those other naughty nasty blogs, which aren't News Limited blogs. You know, fair and balanced blogs like Tim Blair and Andrew Bolt.
And yes, it's only taken a month for The Punch to disappear up its fundament:
The Punch had expected to get about 80,000 readers (unique browsers) in its first month. The official figures show we ended up with 206,281 readers. This compares to Crikey, which is five years older than us, and had 179,069 readers in the same period.
Great, so tell us David Penberthy, exactly what was the average duration of the hits? Were they unique hits which lasted a nano second, or unique readers who frolicked through your fine intellectual fare as if they'd stumbled on Wittgenstein? And exactly how much revenue did you generate through click throughs? A new profit centre for News Limited, storming up the charts like Ice Age part the zillion?
Never mind. How about trolling through Crikey, in The Punch thanks its readers and extends an invitation:
This funny little niche website run out of Melbourne has been obsessing about us since we launched, and it’s something we regard as proof positive of the navel-gazy bullshit which blights the media landscape, where journos both from the independent blogosphere and big media would much rather talk about each other than the readers.
As you're doing right now? And I'm doing about you. And Crikey is doing about you doing it? And you do it about Crikey doing it about you doing it?
Funnily enough, the one part of Hartigan’s speech which received intense scrutiny was his provocative analysis of the blogosphere as a safe haven for single-issue cranks, obsessives and ideologues who come at every issue from a fixed position.
Like Tim Blair, Piers Akerman and Andrew Bolt? Or don't you bother to read them? And their single issue climate change crankery, obsessively ideological and always coming from a fixed position (in fact Akkers on anything to do with anything apart from the extreme right is like a barnacle encrusted on a hard substrate).
But I guess if you have no sense of shame, shamelessness is the best strategy, just as patriotism is the last resort of the scoundrel:
His (Hartigan's) observations about the juvenile and superficial conduct of some bloggers was borne out in the real-time twitter coverage of his speech by Crikey’s Bernard Keane, a grown man who, to borrow from Tim Blair, writes with all the giggly, exclamation-laden excitement of a teenage girl in her email account of schoolies week.

“Tell them something they didn’t know! whodathunk!”, “did someone say non sequitur? Hartigan leaps from topic to topic with no apparent connection” and “No cliche left unturned! tell us more Harto!” were just a few of his more cogent tweets covering the speech.
Which leads me to an existential question. Is the twit twittering on the tweeter any more twitterish than the twit twittering about the tweets?
Then after this bout of navel gazing, the prize gherkin has a sanctimonious, righteous solemn moment:
This self-obsession ignored the much more interesting core of the speech which was that journalism, big and small, was often its own worst enemy, because journalists and editors cannot distinguish between what they want to write about and what the readers actually want to read.
Uh huh. Like who's got the bigger dick, Crikey or The Punch, and who the fuck cares, apart from a few navel gazers.
While the speech was upbeat and positive about the future of print, it was this passage which sounded the warning, that if the media continues to entertain and amuse itself first and the readers second - as the coverage of Hartigan’s speech has proved - it will struggle to grow its audience.
Uh huh. And some day you think you'll be able to charge for access to the sublime content of The Punch?
In your dreams ...
But okay, let's see how you sign off with a ringing, upbeat and positive insight into the future of print, and the dangers of introspective ramblings:
Oh, and we’d also like to thank Crikey for this piece, where apart from some desperate technical quibbling about their superiority on page impressions, unsurprising given that they’re four years and 11 months older than us, they did at least have the decency to admit that we’ve already got more readers than they have.
Oh so you do have the bigger dick. Does that make you the bigger dickhead?
Posted by dorothy parker at 11:47 AM