Janet Albrechtsen, Barry O'Farrell, the Daily Terror and a confederacy of dunces 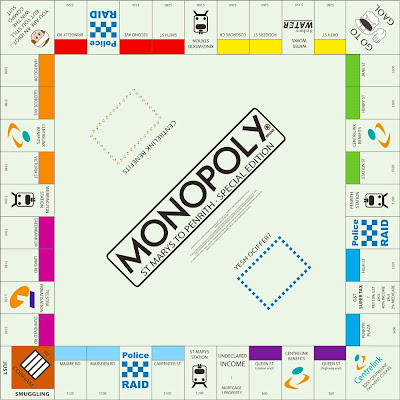 (Above: Mt. Druitt Monopoly. Me and the Daily Terror into stereotypes? Not likely).
Way back when possums, likely enough before some of your children were born - should you be lucky enough to have children and seek to give them the best of Australian educational opportunities - the Daily Telegraph published a story full of sage advice about the best place to go to get that education.
Or rather where not to go, which happened to be Mount Druitt High School. Well we all knew that anyway - there be dragons out Druitt way - but it was peculiarly pungent story, with a front page headline "The class we failed" as a way of drawing attention to the fact that no student had scored a TER (Tertiary Entrance Rank) above 50 when the top mark possible was 100.
The angle in the story was that the paper believed the state and its educational facilities had failed the students, but the paper also ran a photo identifying the students. Who somehow thought this also branded them as failures, losers and dropkicks.
Even better, the students took the Terror to court, won the action, achieved damages settled out of court, and got the paper to publish an apology:
The apology, published November 13, states in part: "In that story The Daily Telegraph suggested, among other things, that the students in the class of 1996 failed their HSC.

"The students in the HSC class of 1996 successfully completed their HSC and contrary to the suggestions in the original article many of those students performed very well scoring high marks in the HSC.

"The Daily Telegraph apologises to each student in the class of 1996 at Mt Druitt. It also apologises to their parents and friends for all the hurt, harm and suffering it has caused them." (here)
Not that the Terror was truly sorry, as it maintained a rather truculent recalcitrance, at least if News Limited CEO John Hartigan can be taken as a guide:
The words in the story pointed to deep-seated problems within the education system, but a barrister convinced the jury that, regardless of the words before him, what we really meant to say was that the entire class was too stupid to pass the HSC. (here)
Damn you activist lawyers, damn you all to hell (and to hell with juries too, bet they were educated out Druitt way).
Now you might have thought that this never happened, at least if you happen to read Janet Albrechtsen's NSW Liberals bottom of the class.
Dame Slap soundly spanks the bottom of Barry O'Farrell, leader of the Liberal opposition, for daring to vote with the Greens in the upper house to block NSW Labor party legislation designed to repeal a twelve year old ban on publishing comparisons of schools based on common testing results such as the HSC, the school certificate and national NAPLAN testing of literacy and numeracy.
Just as the Liberals are trying to present themselves as a moderate alternative to an incompetent Labor government - there's been a studious playing down of the fringe right wing loons who used to set policy - they've copped a bucketing from the right wing commentariat, who no doubt prefer to see the incompetent Labor government continue to reign. Hey, it's a fresh round of indignant columns for years to come.
O'Farrell's doing a delicate balancing act to avoid a stoush with the NSW Teachers' Federation, and given that the state government doesn't have much of signficance to do outside education, health, energy, water, sewerage and transport, you can see why he's sensitive.
Farrell's also upset Dame Slap by refusing to vote to sell off the state's electricity assets, no doubt thinking that's a job he can tackle when in power, but Dame Slap doesn't seem to worry about winning so much as an unflagging addiction to core Liberal Party principles. It seems she's never heard of core and non-core promises, which suggests she simply fails to understand the teachings of her idol John Howard or the art of politics.
At the heart of it, you wonder how much it's actually to do with educational principles, so much as a chance for Dame Slap to bash the powerful teachers' unions.
Dame Slap dresses it all up as helping the students:
The reforms, depicted by unions as a wicked conservative agenda to shame schools and punish children, were squarely aimed at improving the lives of those who most needed it: the country’s most disadvantaged students. Uncovering schools that were failing them and encouraging best practice among all schools sat at the reformist centre of politics.
Eer actually it's pretty easy to find out which schools are failing, and which have a high percentage of dropkick losers in them already. Doing something about it - which would involve spending money, and not on rich private schools - is what politicians struggle with, as the rich get their school snouts into the public trough. But hey ho, who cares, that just makes me sound like a member of the teachers' union. After all, if reformism means redistribution of wealth, I must be little better than a rabid communist leftie.
Part of the fear at both a national and state level is that the tabloid media - who could believe the Terror has reformed its ways - will trawl through the data and produce simplistic reports on schools, failures and dropkick losers. (Sure we already know the answer - anybody who lives in the west is by definition a bogan and anyone who lives in the country is a hick - but backing up that prejudice with unimpeachable data is surely good for a paper wanting to kick an education minister's head).
Now the federal government while becoming an enthusiastic supporter of accountability and transparency and yadda yadda, has also tried to implement in its legislation mechanisms which will prevent third party exploitation of the data, which is designed supposedly to be of benefit to parents and students.
Co-conspirator with O'Farrell, John Kaye of the Greens, presents this kind of argument:
The Greens, the Coalition, the conservative crossbench of the NSW upper house, the independent Gordon Moyes and principals, parents, teachers and their unions - public and private sector - believed it was only a matter of time before media harvested the data and produced simplistic league tables.

The subsequent ranking of schools would have had unacceptable consequences for education in all schools, would have badly misled parents and would have unnecessarily, unjustly and unproductively stigmatised schools at the bottom of the table.
As you'd expect of this kind of pious holy joe, he proposes an alternative strategy:
These tests were not designed to rank schools. League tables would swamp with false and misleading information the debate about schooling and parental decision-making. This is what happened in New York.

Schools that perform daily miracles would be stigmatised and humiliated by ranking that says they are failing. While many schools are struggling and need help, league tables inevitably traduce the reputations of excellent institutions and their communities. This is what happened in Britain and the US.

For schools not coping - and teachers, parents, politicians and education bureaucrats know which ones - the solution is not public shaming but more resources, more teachers and, in some cases, new directions. (School league tables must be stopped).
Well that's all tosh to bull at a gate Dame Slap, even though the federal Liberals also began to drop the ball when it comes to tackling the real problems surrounding the presentation of educational data.
Against that background of an emerging consensus about commonsense principles of education reform, the blundering NSW Liberal Party reveals itself as a party devoid of both common sense and principles. By siding with the Greens in the Upper House, O’Farrell’s Other Mob amended the state education act to punish newspapers with fines of up to $55,000 if they use new information to publish league tables of schools.

Not only did O’Farrell sell out Liberal Party principles, he did so knowing that he cannot stop the production of tables on the internet. Nelson was right to be disappointed. He told The Australian that he was “not an advocate of government-constructed league tables but if someone wants to construct a league table on the basis of publicly available information, they should be able to do so. The last time I looked, this was a free society.”
Oh, that's all right then, publish away. Roll on more Mt. Druitts. My tip to students - make sure you get a lawyer, a real good one. You might be shown up as dropkick losers, but you could be slightly richer drop kick losers.
And my tip to O'Farrell? Keep on keeping on, and you will reach the holy grail of power. Listen to Dame Slap and you might end up helping elect the seemingly unelectable.
Posted by dorothy parker at 11:13 AM