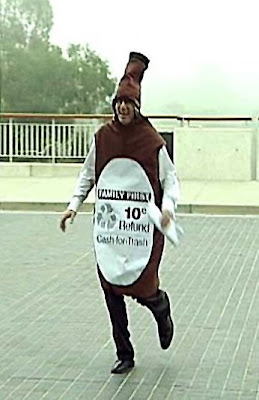 (Above: Senator Steve Fielding demonstrating that a goose by any other name remains a goose).
The Punch seems to have aspirations about turning itself into Australia's dumbest conversation.
But then it's the Murdoch press's attempt to get down and get hip with the intertubes, so why am I surprised.
I guess they wouldn't lead with a story from Pauline Hanson these days - though who knows what might have happened with Hanson in her prime.
So they settle for Senator Steve Fielding as the top of the page lead, with The real reason I'll fight in the Senate on climate change - thereby proving that bears with very little brain can get an indecent amount of exposure. And The Punch is doing what it knows will work - pandering to climate change deniers, the so-called sceptics - in the way that Tim Blair and Andrew Bolt have established as the sine qua non of Murdochian blogging.
Which makes you wonder why they bother, since there's a already a Murdochian super abundance of this kind of nonsense feeding the chooks.
Fielding's piece is offensively simple minded, in much the same way as his political posturing is insufferably self-righteous. You can tell he's taken a liberal dose of the kool aid with his self serving grandstanding on the matter of meeting Al Gore, which clearly wasn't about Fielding getting an education in science from Gore.
After all, this lone intrepid science driven warrior has made up his mind on the basis of one graph that the science is clearly inconclusive. Which in Fielding's world is code for incorrect and irrelevant.
A rough equivalent of his scientific pilgrimage would be me going off to a true believing priest and ask him to prove his faith, while I maintained my own lack of faith. When science is reduced to a debate about beliefs, it's a wretched kind of debate, of the kind always on view in the gadfly snipings of Tim Blair.
And who turns up to play the priest to the pontificating know all Fielding?
But then enter Al Gore. Here was a man who had a lot of power and went around the world preaching about climate change. I thought he might have the answer for me, the ones I couldn’t extract from the Rudd government.
Why? Surely since Fielding is in the sceptics' camp, he now knows Al Gore is just a grand-standing self seeking rich man, the anti-christ of the global warming brigade, without a shred of scientific understanding, and worse than Michael Moore.
But then that's all there in the tone Fielding's words. Gore's a preacher man, with a lot of power, traveling the world, preaching. He surely must have the answer, since a trip up the Himalayas to meet a guru with the answer to the meaning of life is a tad too difficult. Tell me Al Gore what do you know?

I briefly met Mr Gore at a breakfast in Melbourne attended by more than a thousand people. He was aware of the important role Family First plays in the senate and was keen to catch up.

I would have thought if Al Gore was really committed to the cause he would want to meet with all senators who had concerns about the science if it would help ensure that the CPRS legislation would pass. Obviously I was wrong.

Or maybe he could spot a loon recently escaped from loon pond and wondering how he could avoid being caught up in a no win situation arguing with a loon about his already made up mind:
I have written to every senator urging them to look at the graph and ask themselves the key question - what is driving climate change? If they can’t answer that simple question they shouldn’t be voting for a CPRS. This decision is the biggest economic decision in this country’s history, one which is too important to vote along party lines.

One graph is the answer to it all? The complexity of the earth's current situation and the truth of denialism can be reduced to one graph? Well I guess that's better than saying 42 over and over again.
I call on the government to answer my question with a straight answer. If they’re not prepared to do so, I’m happy to fight the lone battle in the senate until those senators who are honest with themselves break party lines.
Oh now we're jerking our collective chain about lone battlers and calling on senators to join the heroic delusionary by breaking party lines. A straight simple answer based on one straight, not so simple deceptive and misleading graph ...
The sad thing is that there's better ways of doing things than what the government is currently proposing, but if Fielding had been around in the senate in the days when we had to do something about fluorocarbons, the hole in the ozone layer would now cover the earth.
Now you might think that The Punch is being dreadfully clever by allowing Steve Fielding to promote his delusional stupidity to the world. But the comments section gives away the game, with all the usual loons chipping in to support Fielding's brave stand.
The Punch is just printing the controversy, and shortly I expect to see lead stories on intelligent design, creationism and the dangers of Darwinism to the health of Australia. I mean I know it was always intended for people who avoided university degrees for fear of learning something, but should it reduce everything to kindergarten incoherence?
It reminds me that the Labor Party thought it was incredibly clever by preferencing Fielding, and then to their astonishment watching as he actually got up, and now they have to contemplate his infinite loonacy at work in the senate on a daily basis. As my new heroine Bronnie might say, whom the gods would destroy they first make read Steve Fielding's guide to the inner workings of his mind.
Because you see there's an infinite more of Fielding's self seeking grandstanding tireless self promotion on view in The Punch column:
I went back to the government with this question but was met with a wall of silence. They had clearly decided it was safer not to engage with me because I had legitimate questions which they probably were unable to answer.

I was left feeling that the only responsible thing to do was to vote against this legislation. At the end of the day, it would be a betrayal of my duty to the Australian people to put at risk the national economy and many thousands of jobs on what is clearly inconclusive science.

But you see wherever Fielding looks, he can't get an answer he can understand:

Armed with this information I sat down with Minister Wong, the Chief Scientist and Professor Will Steffen of the ANU to hear their explanation. After an hour and a half I left none the wiser ...

I received a written response to my questions from the Minister a few days later which had me even more uncertain ...

Some of the data led me to question whether the Rudd government had got the science right. I then took some of the information and questions I had to the White House where I met with one of President Obama’s senior climate change advisors. While these discussions were fruitful, I was left at the end with even more questions than when I had started ...

Well perhaps that's because bears with little brain are better off just munching on honeycomb and not trying to absorb too much information all at once.
But The Punch will no doubt be pleased. They've stirred the pot and got everyone agitated.
But has the understanding of the world's current situation been advanced one whit or jot?
Well in the sense that we understand just how comprehensively the ALP has comprehensively helped fuck Australia by getting Fielding elected to the senate, yes, in spades ... But as for actually understanding things, no, in spades ...
Time to sing a song of Pooh, tra la:
When the sun came out,
the sky cleared up
and the bear of little thinkage
began to dry,
and by and by
showed a high
amount of shrinkage.

Hooray for you!
Hooray for me!
Hooray, hooray,
The Pooh will soon be free!
Now the time has come for proving
What the diet did for Pooh.

And since we pledged
He'd be unwedged,
That's what we're going to do.
He'll be pulled and he'll be tugged,
and eventually unplugged.
We'll have a tug of war
To open Rabbit's door.

Think heavage, think towage
And out the Pooh will goage.
For mind over matter
Has made the Pooh unfatter.
(Below: saving the shrinking Pooh, in a case of mind over matter, but who will save Senator Fielding?) 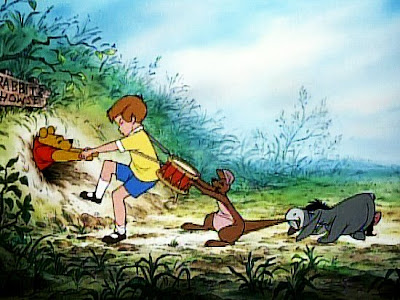 Posted by dorothy parker at 9:24 AM