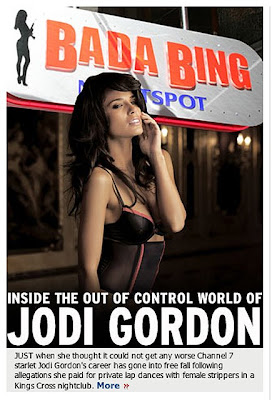 (Above: another in our series of News Corp content we'd love to see behind a pay wall).
Dear old Mark Day has seen the way forward, following behind fearless leader John Hartigan.
Though I'm not quite sure why he bothered to write Bloggers' rage show they're out of touch with reality, as a little sir echo could have done the job just as neatly by reprinting Hartigan's speech about the contemporary state of the newspaper game. (And does amused sardonic cynicism count for rage these days? Apparently).
I guess, while Hartigan's speech was a self serving vainglorious exercise in pumping up the colonial outpost of News Corp, it couldn't with seemliness take on the level of hero worship managed by Day:
More than anyone else, Hartigan is plugged into worldwide trends, information, research, experiments, technologies, think tanks and consultancies. As part of the global News Corporation (publisher of The Australian) he is at the cutting edge of the media experience.
Lordy, not so much a CEO as a visionary, so wired and cutting edge whenever you have a chat with him it's like doing fifteen rounds with a razor. If Christ returned to earth, like as not he'd call on Hartigan to work out how to get his message out on the full to overflowing intertubes 3.0.
Oh okay, how about a little modesty:
That doesn't mean he has all the answers. He doesn't, and no one does.

You mean he's wired like an IED but he doesn't go off as he should?
The truth is that the future is a work in progress. We are in the midst of great and fundamental change, not at the end of it. There is no single answer to the endless questions surrounding the evolution of media and most of the answers cannot be defined as either/or. The emergence of new platforms, gizmos or fields of endeavour does not mean the extinction of the old.
Exactly. I still get out my old 78s and give them a play every so often, and while people are startled that I still watch VHS every so often, I treat them with scorn and derision. Everything old will someday become new again.
Of course being in house Day can't actually deal with any of the underlying issues as to why Hartigan's speech so irritated some people. Can we just sniff the smell, the stench of righteous self serving hypocrisy?
In a speech to the National Press Club he said bloggers produced "something of such limited intellectual value as to be barely discernible from massive ignorance". For good measure he added that the blogosphere was "all eyeballs and no insight". Many blogs and a large number of comment sites "specialise in political extremism and personal vilification".

Truth to tell, very few blogs or comment sites could specialize in political extremism so adeptly and in such a well funded way as Tim Blair, Andrew Bolt and Piers Akerman. And few could indulge in the personal vilification that goes on in those sites, as in Akkers' cheerful demolition of readers who disagree with him as dolts, idiots and dummies.
Yep, it was the pot calls kettle black aspect of Hartigan's all verbiage and no insight - about his very own products - that irritated some people. Which is why the dear old thing Mark Day has to retreat to safe ground and claim that the argument presented by Hartigan's critics only amounted to "You don't get it."
This is an unsatisfying answer to a deliberately provocative speech, designed as a rallying call to a nervous newspaper industry. To suggest the head of the nation's largest media company doesn't understand the nature of the challenges of the future is quite out of touch with reality.
Sad to say Mr. Day, you seem to be out of touch. Dare I say you don't get it? Do you ever trawl the soft gangrenous underground of the world of News Corp. blogs? Which would bring you into an ugly reality going down right now?
Which is why the question of paying for crap is on the minds of some of your readers. But clearly you live in hope:
The alternative is to devise ways to attract more revenue and I think we'll hear more about that very soon when decisions are made about which content should be put behind pay walls and which should be free.

Indeed, but what to put behind a pay wall for a tabloid like the Daily Telegraph? Will people pay to vent on Tim Blair? Good luck if they do, so long TB for me. Will people pay for the rants of Piers Akerman? Good luck if they do, but a world of peaceful bliss awaits me. And if it's not the opinion makers and the columnists you pay for, exactly what kind of hard news (I use the word loosely) emanating from the Daily Telegraph would you put behind a pay wall and expect people to stump up for?
And please don't make the Hartigan debate that a WSJ offers a way forward that tabloids might follow. Specialist information is specialist information, and saying that the New York Times is dull (read liberal?) isn't a sufficient explanation as to why their pay wall for their prime columnists failed so abysmally.
This will be a critical test. The blogosphere is already alive with cries of outrage at the mere thought of paid sites with the strongest message being "I refuse to pay".
Here's the real message - not a simple 'I refuse to pay', but that 'I refuse to pay for crap'. I pay for content all the time, I  just can't see myself taking a flying leap into the darkest despair and pay for News Corp crap pretending to be content. And sad to say, there's a lot of crap masquerading in News Corp's colonial branch at the moment. And for the moment - until you attempt to build a Maginot Line - I can get much better reading from a dazzling array of free resources. So much I hardly know what to do with it all.
And when you build that Maginot line, it will last about as long as it took Hitler to send a tank in its general direction, or rival news sources to offer up alternatives that are cheaper than your business model. Which - gasp - might continue to be free.
While others search for new forms of journalism, or dicker with the manner in which it is presented, I'd be sticking to my knitting, investing in journalists who actually break stories and uncover the most valuable resource in media companies -- news.
Uh huh, and just who, what, which source broke the news of Michael Jackson's death?
I am sure many of the people saying this mean it, but the blog loudmouths are not the entire market. Far from it, in fact. Those who regularly scan blogs on media industry commentary sites will quickly see that relatively few people repeatedly push their own barrows on a large number of outlets. They make a lot of noise but contribute very little other than their obsessions.
Blog loudmouths aren't the entire market? Blogs on media industry commentary sites? Relatively few people push their own barrows on a large number of outlets? A lot of noise but contributing only their own obsessions?
Dearie me, and your fearless leader was on about the incestuous relationship between mainstream journalism and the commentariat, and here you are offering up the same kind of narrow, yes it has to be said, ignorant perspective on the way people use the full to overflowing intertubes. There are easily over a hundred million blogs out there at the moment (no one knows how many in China), and there's a lot more out there than your narrow obsession with those who are narrowly obsessed with mainstream colonial media.
There are more things in heaven and earth and the intertubes than are dreamt of in News Corp philosophy. Especially those who cling to the delusion that somehow news will bring money, in much the same way as DC3s once were thought to bring showers of cash to New Guinea:
By all means we should develop new products -- hyper-local information services such as real-time road traffic conditions, the location of the cheapest petrol in your suburb or tomorrow's specials at Woolies or Coles -- all pushed to hand-held mobile devices. But while doing this we must also keep alive the notion that breaking news was, is, and will be forever the key role of journalism.

Say what? Is this some kind of implicit criticism of the fearless leader's hyper informed vision of the future?
Didn't he have a changing vision of the news? I guess as good a way as any to enact that vision would be to move journalists out of Parliament House so that they can get in touch with their readers. End the press gallery tradition, and develop a rating system to see which stories should be run.
You now, forget the parish pump reporting on local news, in favor of reporting more real time events, like petrol prices, traffic jams and cheap shops. Stories that'll enrich the lives the silent majority. You know, less negative stuff, more content that inspires, surprises and delights, more humor, m ore escapism.
You know, like the Readers' Digest, only on steroids.

Poor Mark Day, in the end even he couldn't go along with his fearless leader's vision. Instead all he can come up with is a pious dream of hope for his beleaguered but much loved world of newspapers.

That's the charm of it. We may be in uncharted waters, but in good time the answers will come, innovations will progressively change the game at the edges, new financial and technical models will be refined and people will go on, sifting a variety of sources for their mixed meal of information and entertainment, engaging in their own world of choice.

In my book, that's a pretty good outcome.

Especially if you don't have to pay for the pleasure eh Mark? Now bring on that pay wall, and let's see what the punters will pay for ... especially if they're already forking out fifty to eighty bucks a month just to get online in the first place ...
(Below: another bit of content in the unending stream of News Corp content we'd love to see shoved behind a pay wall). 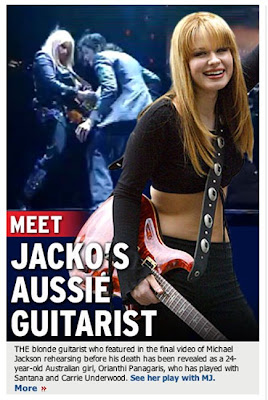 Posted by dorothy parker at 8:05 AM