Nick Minchin, the NBN, FUD, and look, up in the sky. 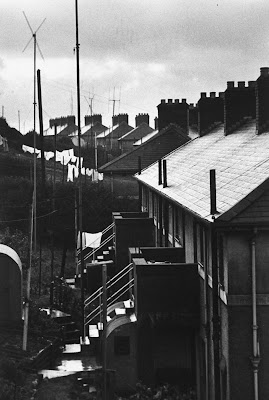 (Above: the good old days when a TV antenna was a TV antenna).
Every so often, I like to look out at the sky. Is it a bird or a plane I muse, since I usually look out the back, thereby missing the trains, trucks, cars and bikes roaming up the rat run at the front of the house.
Sadly it also means I rarely take a gander at the Optus and Telstra cables festooned off the power poles that litter the street, and which even now deliver broadband into my humble abode (but not pay TV, since to pay to watch television is like paying for a good beating in an SM dungeon when your partner likely enough will do it for free if you ask politely).
Way back when of course the capital cities were blessed with above ground cabling thanks to the joys of competition in pay TV, which turned out to require a monopolistic vision, in much the same way as it seems we only need a couple of supermarket chains.
Every day I thank the free market vision of competition for the urban creepers and vines, just as I thank federal politicians for blessing inner western Sydney with the chance to check the undercarriage rivets on all kinds of planes, thereby helping out air safety, while learning what it was like to hop into the gas tank of an F111.
But what's wrong with overhead cabling you might ask? Wasn't it the height of fashion in Newcastle to have sixty foot high television antennaes to pick up the faint signals from Sydney so that all could enjoy the Mickey Mouse club in black and white? Sure a few moaners and fusspots called them ugly, an urban blight, but we're talking about the dawn of western civilization as we know it.
Well prepare to get your socks knocked off. Not only is Piers Akerman an elephant loving conservationist, but Nick Minchin is a urban landscape aesthetician - Look, up in the sky! There's an ugly downside to Labor's broadband project.
By golly, I'm expecting him to turn up some time soon to advise us on the heritage colors appropriate for our two up two down, while I hope he doesn't at the same time get too anxious about the ugly wires and cables out the front. You know how upset these petals can get when confronted by hideous urban ugliness, especially if they come from manicured Adelaide:
The uproar sparked by the unfettered installation of unsightly aerial pay TV cables in the 1990s was the catalyst for the formation of lobby group Sydney Cables Down Under and others like it.

This group now has a new fight on its hands with the Rudd Government in cahoots with the Rees Government moving to override the concerns of residents and NSW's 152 councils to roll out aerial cables as part of the proposed national broadband network.
What a concerned, caring chappie. And all about Sydney too.
Now here's how the gotcha works.
First complain bitterly about the extraordinary cost of the Ruddstra network at $43 billion. Then throw in a bonus costing:
Optus estimates that if 100 per cent of the network's cables are deployed underground, as I am sure most taxpayers will quite reasonably expect, the network would cost $60 billion.
Sure I'd quite reasonably expect the government to bankrupt the country for 43 billion, and I'd then even more quite reasonably expect the government to really bankrupt the country for 60 billion, so we can all imagine we're living in an Ikea home, or perhaps an Adelaide subdivision developed to the finest Scandinavian specifications. And Minchin and his comrades can rabbit on endlessly about the debt burden facing future generations for eternity.
So what fun to berate the broadband plan for lacking sensitivity. Yes, bovver boy Minchin in his Blundstones telling us about sensitivity and nation building visions:
Many suburban streets already have two black pay TV cables strung under the power lines. Under Labor's broadband plan, they are set to get a third. It's hardly the vision that comes to mind when Rudd spruiks the broadband project as this country's biggest "nation building" project. I am certain many people will be gobsmacked to learn that overhead cables are even being contemplated, let alone featuring prominently in Labor's plans.

Yes, gotcha. There's a clear universal preference for cables to go underground, and the government to spend up to sixty billion so that the likes of Minchin can rant about how it's going to cost the earth for ever. (The one thing Australians need to know is that the debt is there, it is rising and it has to be paid for - hmm, who was that masked man on the radiophonic news service and whatever happened to our shortwave aerial?)

Yes, gob smacked I am. I'd expected the Rudd government to shift all the electricity poles around town underground at the same time, together with a street beautification and make work scheme estimated to cost only a hundred billion or so. After all, I'm told that it might only cost around the $25 billion mark to put existing overhead electricity and communications cables underground in urban and suburban Australia, and only $5 billion to do it in the Sydney basin.
Double that for the pot plants and kerbing, throw in the forty or fifty for the NBN, and there you have it. 100 billion. Say it quickly and it won't put you off your porridge. Cheap at half the price, which is why I expect urban beautician and pimple remover and blight destroyer Minchin to lead the charge.
If we have to have this wretched NBN, I expect Minchin and his colleagues in the senate to demand, to insist, nay to vote for the government to embark on this necessary work, to lead the way and show how to beautify the urban landscape so that trucks and planes and trains can roll through a stunningly pristine environment.
No cables for them to catch on, so now they can just take on a building or a car or two as they keep on trucking.
Because you know, using Mr. Minchin's logic, if we don't put up the NBN, then we'll still have all the electricity poles and wires and two sets of cables running around the suburbs. And wouldn't that be a tragedy of enduring proportions to a sensitive aesthete.
What's that you say? It's not really logic or even a solution driven approach?
Oh I know, he's not really serious. He's just stirring the pot. Let's see how good he is with a wooden spoon:
This out-of-touch thinking is oblivious to the clear universal preference today for cables to be deployed underground. Many councils across the country have also moved overhead lines underground in response to the wishes of ratepayers.

Yes, there's no doubt it's made Kellyville look a most attractive place to live, work and play.
It has been reported that at least one cabinet colleague of the Communications Minister, Stephen Conroy, has raised alarm about the broadband network's aerial cable component and I suspect many Labor backbenchers, who have been given no say, will be anxious, if not outraged.

Putting visual amenity, heritage and environmental considerations aside, overhead broadband cables hung between power poles are also extremely vulnerable to strong winds, fires, lightning strikes, high trucks, car accidents and vandalism. Experts advise that even possums and birds can cause problems.
Anxious outrage. A backbencher in alarum. At least one!
Even possums and birds! Those fiendish sulphur crested cockatoos, those diabolical Major Mitchell fiends with their razor beaks. Unlike the back hoes of Sydney's skilled operators, who've never dug up a cable when three would do.
But I get the picture. Once the NBN is draped across the land, it will be as functionally useless as Christmas decorations manufactured in North Korea. In the same way the only time we've ever had an outage with broadband was from cables in the ground getting soggy, and nary a one since we went above the turf. Go figure.

It will be interesting to see the response of investors, lenders and insurers when they learn that the most critical and sensitive component of the network's assets will be hanging from power poles.
Yes indeed, in much the same way as every day the operators of pay TV worry that the state government might somehow embark on the folly of bringing back double decker buses. And thereby reduce the value of the critical and sensitive components of their network to zilch, zero, zip. Unless of course you're thinking that your satellite connection is somehow safe because it's in space.
Well you don't know how high birds can fly these days, not to mention stray Iranian and North Korean rockets, not to mention the biggest danger, which is of course all the man made space junk, which in turn pales before the extreme fear induced by asteroids and meteorites and Liberals paying Russians for a space junket.
Not to mention the termites nibbling at the steel base of your satellite dish, and the perils of concrete cancer and winds from global warming and hot air from blathering politicians.

While nobody doubts the importance of broadband, wherever possible cables should be deployed underground in existing trenches and ducts and in new ones. In areas where it is not practical, communities and councils must be fully consulted and, if opposition is overwhelming, other options negotiated.
Yes, let's have endless discussions and negotiations and consultations and feel good feel ups, with the scones and teas and lamingtons charged to the national debt.
Hold on a second. I just read the other bit. Nobody doubts the importance of broadband? Excuse me? You mean the Liberal party now accepts Ruddstra as a part of nation building and will help pay for it to be put underground, riding roughshod over any objections Telstra might have to the use of its facilities. Thereby saddling the nation with even more overwhelming debt until the twelfth of ever (which is even longer than never).

If the Rudd Government, in partnership with complicit state governments, rides roughshod over residents and councils to install overhead cables, the inevitable community backlash will overwhelm any anticipated short-term political gain.

So that's it. Nation building? It's only short-term political gain, and Minchin himself is doing his FUD for short term political gain. Nation building? Come on cockies and galahs, do your thing.
This is the best the opposition spokesman on broadband, communications and the digital economy can come up with? Talk about a possum brained feast of fear, uncertainty and doubt.
Australia as a cutting edge country? Not by 2020, not by 2050, not ever if the Liberal party's current FUD mouthpiece on the digital economy has his way. But kindly ladies in sweet suburban settings certainly won't have their lawn and roses view of the world disturbed ... so kind of Nick Minchin to think of them.
Welcome to the picket fence view of the world, 2.0.
Posted by dorothy parker at 12:20 PM