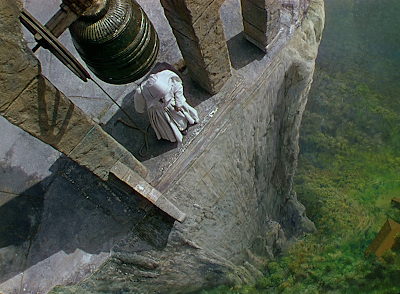 (Above: Black Narcissus, or how Piers Akerman made me think of joining a nunnery).
What ho? What's this?
Why I had taken thee for a knave, a rascal, an eater of broken meats; a base, proud, shallow, beggarly, three-suited, hundred-pound, filthy worsted-stocking knave; a lily-livered, action-taking, whoreson, glass-gazing, super-serviceable, finical rogue; a one-trunk-inheriting slave; and one that wouldst be a bawd in way of good service. Indeed, I'd fancied thou art nothing but the composition of a knave, beggar, coward, pander, and the son and heir to a mongrel bitch, one whom I will beat into clamorous whining if thou deni'st the least syllable of thy addition.
But it seems as well as being a shameless filcher of Shakespeare, I got it wrong.
Akker Dakkers has turned caring socialist.
Day after day recently he's sent me into turmoil, first with his love of Bruno (even if he hadn't seen the film), proving his love of gay folk, and then, with his enthusiastic support for the importation of Wall Street orientated elephants from Thailand to save Taronga zoo, proving how he got the notion of breeding in captivity as cosmic entrepreneurial elephant salvation, in contrast to the useless greenies and RSPA, who didn't have a clue about anything.
Yep, and now he's a flush pink, as in Aboriginal milestones and hateful millstones, he's doing what his fearless leader John Hartigan demanded. A story that surprises and delights readers. A clap happy story. And what's more he wants to fling more government money at indigenous women and in particular Mudgin-Gal Aboriginal Women's Corporation:
Its work is however under constant threat because Mudgin-Gal is run by volunteers who are funded through a variety of private and corporate bodies through the Redfern Foundation. Its skeleton staff is paid through a trickle of grants from state and federal agencies on a project-by-project basis.
Given the millions of dollars the Federal and State Governments are wasting currently, it seems sheer lunacy that a group such as Mudgin-Gal, which provides the tools that will enable some Aboriginal families to find much-needed stability, is starved of resources.
By golly, it's time to get Piers into position as a bureaucrat handing out the lolly to aboriginal groups. He's turned sensitive and aware. Now what would you think was a reasonable measure for the work Mudgin-Gal does?
Through Mudgin-Gal’s Seeding Hope, project, which will be launched today, the Redfern women hope to continue to develop their hybrid programs developed in concert with bodies like Relationships Australia.

This may mean teaching such simple things as attendance and compliance to enable them to hold regular jobs - basic stuff, but crucial.

Mudgin-Gal, which occupies several terrace houses and operates a women’s shelter, has earned the respect of the community. Not once have men broken into the women’s shelter.
Not once broken into by the men! I can see that going on any sensible funding application form. Have you either in the recent past, or the distant past been broken into by a man or men? If yes, give details - break-ins will be held against you - and if no, proceed to the column indicating the amount you are requesting. Any figure will do, for break in free folk.
I keed, I keed. If you want to find out more about Mudgin-Gal, you can find a pdf on their programs, philosophies and activities here.
Reading it, you wonder if the women involved would be entirely happy having Piers as a bouncing puppy lolloping along enthusiastically behind them. After all, when Booker Prize winner Arundhati Roy won the 2004 Sydney Peace Prize, she donated a third of the money to the Mudgin-Gal Women's Corporation (the other two organizations being the ACT's The Connection and Weena Mooga Gu Gudba from Ceduna).
Now don't start Piers on the Sydney Peace Prize and that bunch of do gooder wankers, or their decision to give the prize to Roy - paying for a perfect stranger to treat us like pariahs. A man can only stay community and socialist minded for so long.
When you have a head kicker like Piers as your friend, here's hoping he can fling $16.5k the women's way when he wins a prize for "best inspiring story" of the year.
But bummer dude, there's always a downside to an Akker Dakker story. First the yin, then the yang. First the light, then the dark.
First he upsets a few abused people by proposing the following:
Every study shows the family is the most important social unit in our society and that abused children, almost inevitably, will go on to abuse their own children.
Remind me not to give any help to anyone abused as a child, since almost inevitably they'll go on to abuse their own children. You're doomed I tells ya, because Piers' tells me so.
And then it wouldn't be an Akkers column if he didn't provide a bit of balance, and a display of how much he loves aboriginal culture, provided it conforms to  his notions of aboriginal culture (which should include a capacity to manufacture neolithic tools in the manner of 40,000 years ago tribal ancestors).
By contrast, the ABC will tonight screen a so-called documentary called Spirit Stones that mumbles its way from mysterious claims of gravel falling from the sky to a generalised statement against white civilisation.
Well of course I'd expect the socialists at the ABC to do this sort of thing. Come to think of it, I'm surprised that's the least of it, but I guess dwelling and brooding too much on the show would go against the grain of writing a happy, uplifting story. Oh wait, there's more:
Again, by way of contrast, the curious program to be aired on the ABC appears to be a meandering rant of those who do not want to see Aboriginal people given the skills to endure in the modern world. That the ABC and its funding body Film Australia feel it was worth making and broadcasting reflects on the disastrous social-engineering mindsets that dominate within these bodies.

Fortunately, such backwardness doesn’t prevail among the gals from Mudgin-Gal, who have more important things to concentrate their minds and focus their energy on. Mudgin-Gal, with your help, can make a positive difference. The ABC program demonstrates that culturally, it remains a negative force.
Gals. From Mudgin-Gal. Lordy, let me roll over and quietly die in a feminist funk.
Okay, recovered, feeling better now.
Um, just one thought. "Appears to be". Strange kind of wording. "Appears to be"?
Piers did get a screener didn't he? He has seen the show, which airs tonight on the ABC? And not just read the screed on the back of the case?
It's not another case of writing a column in a vacuum, as he did about Bruno, which included a little sideways flip of the curls on the head, along with an admission he hadn't actually seen the show?
Hmm, you'll find no greater critic than me of the culturally stultified world of Film Australia, now incorporated within the stultified world of Screen Australia, but a close analysis of the text provides no internal evidence Piers has actually watched the show. Like there's plenty of generalities, but no specifics, in the sense that his meandering rant is interchangeable with any number of other meandering rants of his on the subject of indigenous Australia.
"Appears to be"?
What a prattling knave.
Oh well, enough with the carping. Let's stick with the positives, another victory for fearless leader John Hartigan and his quest for positive, uplifting stories. Who'd have thought that he could lift up that ponderous Piers pachyderm (meaning thick skinned) and transform him into a shining light, dispensing government welfare with a flourish and exuding positive joy in the company of Sydney peace prize winner Arundhati Roy.
By golly, I passed up the chance to become a nun when a child, but suddenly I'm thinking of joining - maybe more The Nun's Story than Deborah Kerr in Black Narcissus (though come to think of it, that David Farrar has fun amongst the penguins).
In this crazy, mixed up world, kiddo, miracles can happen ...
Update: I see in a response to a comment that Akerman claims to have seen a preview of the film. Phew, that's a relief. He's just an incompetent writer and a hopeless film critic. Another up beat ending to a happy story full of surprises and joy for the reader.
Posted by dorothy parker at 11:55 AM