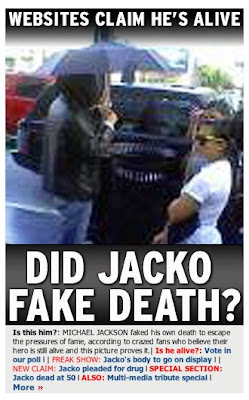 Credit where credit is due.
We know the entire intertubes is full of loons - it's one giant loon pond, full to overflowing some days.
Naturally enough in the outer reaches of the loonasphere, there would inevitably come conspiracy theories about Michael Jackson faking his death. After all, in a country where an amazing six per cent of Americans believed the moon landings were faked (and a further 5% were undecided), conspiracy theories are as natural as breathing or sliced bread.
Amazingly one poll even suggested that more than a third of the American public suspects that federal officials assisted in the twin towers attacks, and 16% speculated that secretly planted explosives were the real reason the towers collapses. These loons have clearly never wired a building for detonation, let alone a skyscraper.
Confronted with this kind of outer limits madness (which makes the Twilight Zone seem like a series of television documentaries), what's a respectable newspaper to do? Encourage them, delight in them, print them and mock them, or print them and celebrate them?
Easy peasy.
There's journalism and then there's tabloid newspapers. Come on down to loon pond, the entire editorial team at the Daily Telegraph.
Not only does the tabloid regurgitate the stories taken from half baked websites, feeding off the intertubes like piranha - or rather, like seagulls offering up well chewed fish to their young from their gullet - but the editorial team make hay with the other haymakers. They relish the fun.
The out of course is to call them all wacky conspiracy theories, as any serious journalist would do. Then join in the folly with gusto.
As well as a lovingly detailed story, they issue an urgent plea - Have you seen Jacko? Send us your pictures - and even offer you a chance to vote in a poll. Naturally they've got 22% of voters saying they believe Jacko is alive.
Really it should have been a full hundred per cent - clearly the seventy seven per cent who said they didn't think he was alive haven't got a sense of humor.
Then they label the decision to put Michael Jackson's body on display as a freak show, when now it looks like it might be the only way to stop the freaks from thinking that Jackson has freakishly survived. Seeing as how the rumor mongers are whipping up paranoid conspiracy theories. You know, the ones asking the world to report Michael Jackson sightings and to send in their photos (it's not bitterness or envy that makes us ask for photos of mermaids, ghosts, aliens, fairies, pixies, and the real Santa Claus, so much as a desire for respect as a serious site dedicated to breaking hard hitting news stories).
I guess it's all part of the game called fish and chips wrappings, but why do I always feel when I'm within ten feet of the Daily Terror at a newstand that it's leaching my mind out of my body and converting it into woodchip with an efficiency even a Tasmanian Gunns mill couldn't manage?
Time to start wearing the tin hat again? Or should it be made of aluminium?
Speaking of "He's Alive", that's the title of a Twilight Zone episode in which Dennis Hopper plays a bush-league fuhrer who's coached by Adolf Hitler in the art of swaying a crowd by speechifying. The closing narration by Rod Serling runs thus:
Where will he go next, this phantom from another time, this resurrected ghost of a previous nightmare - Chicago; Los Angeles; Miami, Florida; Vincennes, Indiana; Syracuse, New York? Anyplace, everyplace, where there's hate, where there's prejudice, where there's bigotry. He's alive. He's alive so long as these evils exist. Remember that when he comes to your town. Remember it when you hear his voice speaking out through others. Remember it when you hear a name called, a minority attacked, any blind, unreasoning assault on a people or any human being. He's alive because through these things we keep him alive.
Golly, maybe it's time for The Daily Terror to write a Michael Jackson episode, where he returns from the grave to coach folk in the art of swaying a crowd by music making.
But wait, that'd be fiction, and the Terror is a newspaper.
So they say.
(Below: Dennis Hopper in his prime). 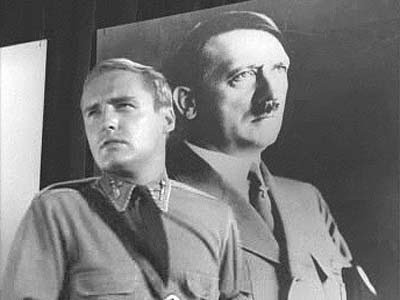 Posted by dorothy parker at 2:31 PM