Well after John Hartigan announced that late breaking newly arrived The Punch was the future of the intertubes, with more hits in a month than Crikey could muster after years trying to appeal to cash paying punters, I thought I'd drop in and see how Australia's best conversation was going.
I guess if you do the same, you'll have to be ready to go into the public bar of your local pub (that's the front bar to you foreigners), order up a schooner (that's fifteen ounces of liquid amber in the old school), and begin to yammer about sport.
Excuse me if I feel a vast ennui descend, the rough equivalent of actually watching every ball bowled in a test match. Or listening to my partner talk about it.
Sorry, dozed off there for a moment, I guess it has something to do with David Penberthy's strict injunction that The Punch isn't designed for toffs or people with three degrees.
Perhaps that's why at the head of the page we're confronted by a snap of the bare bellies of male English cricket fans as support to a column headed Ten reasons to love the Poms, with the subheader Ashes special: English elitism, photo secrets and Colgan's defence of the Brits.
I didn't click through and join the conversation.
Below that was David Penberthy's piece on Crims and their clique turn Sydney into an open sewer. That's just a piece recycled from the Daily Terror. I didn't read it there, why would I read it here? Another conversation unjoined.
Below Penberthy's discovery that last month's ramblings about the forty reasons he loved Sydney neglected to mention the stench he's only just discovered coming from the open sewer he belatedly realizes he now lives in, is bubble headed booby Tory Maguire's latest stab at relevance in How to rip off an American reality TV show properly.
Apparently it's a heart rending story about the final of Australia's Next Top Model on Foxtel last night. Forgive me, but I just couldn't be stuffed joining the conversation.
Next we have a piece by Leo Shanahan entitled Hey, check out the truck: our political Summernauts, which manages to mingle a Canberra car event with utegate and the Liberal party's new debt truck. It had all the appeal of listening to a rabid petrol head rabbiting on about how he'd got the nitro to kick in.
Below that was a hopeless piece about hapless women by Lucy Kippist, Time poor or just plain hopeless, all about her snooze problems, reminders and the difficulties of getting milk. I dropped off for a snooze before I could get any deeper into her issues, so I can't recommend therapy, drugs or a computer program.
But at least Phil Hillyard got three comments for his story Shooting the Ashes: 540 balls a day, and you can't miss one. As I can miss all 540 balls of the ashes every day for five days, we somehow failed to touch base in a spiritual way, and I passed on the chance to share his photo assignment. But just to rub in the cricket theme, below that was Luke Foley with England's toffy cricket elite keeps the crowds at bay. Something to do with it happening in Wales, which is too taffy or is that daffy, for me to keep up with.
And that, as they say, is that for the eighth of July, and when I saw the last story for July seventh was A fan's take on a fallen hero, musings by Tony Watson on recently retired Sydney Swans footballer Barry Hall, I didn't bother to go further. Not so much a series of conversations, as a one way dead end street.
It seems there are sporting dragons at the bottom of each day of the Punch's lively conversation.
Which leads me to wonder if the culture inside News Corp is now so befuddled and bestudded with jocks and bimbos and dummies that they're completely incapable of putting together a more coherent, intelligent and interesting site, perhaps not pitching to university graduates but at least aiming for the college crowd. Or even an intelligent last year high schooler with more on their minds than the first thirteen, the first fifteen, the first eleven and women who want to snooze.
I mean, Pina Bausch, perhaps the world's best choreographer, certainly the most inventive and revolutionary of the late twentieth, died last week, of cancer, unsurprising the way she smoked. Where's that in the tawdry, relentless, stifling middle brow superficiality of The Punch's lively conversations? (And yes I can find it on a Crikey blog, complete with link to video of work on YouTube).
The web site you seek
Cannot be located
But endless more exist.

Now one day's only one day, but in a world with billions of pages, life is short, and it's already time for a makeover and a re-format and a freshening up of the content and the slate of writers, and meantime, it's time for me to punch out, or clock out, or whatever else you do on the intertubes when a click can lead you to a world of instant tedium, and another click can take you to a world of happening things full of really bright writers saying interesting things ...
No links, why waste your time in the way I wasted mine?
Yes I went from The Punch to a half dozen American sites and had a whale of a time, and it didn't cost me a penny. And News Corp thinks it can charge for the likes of The Punch. Come on, bring it on ...
(Below: lessons for the Murdoch press to learn from fenians? A Punch cartoon from 1867). 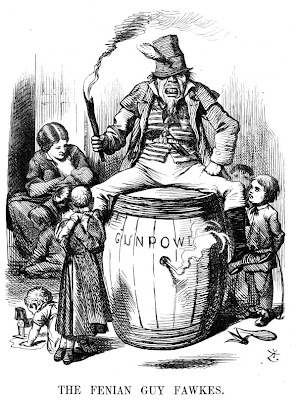