Piers Akerman, the vexatious blacks and a solution close to hand 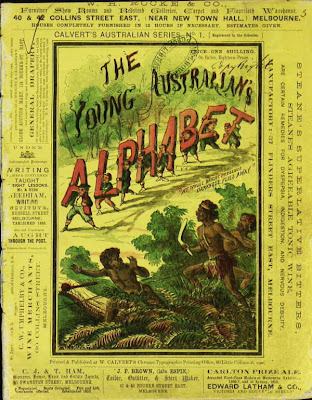 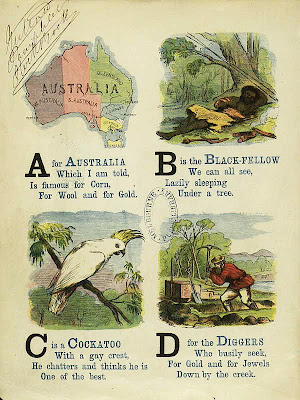 (Above: B is for black-fellow, We can all see, Lazily sleeping Under a tree.)
Oh dear, it must be Sunday. So if you live in NSW, you have a nice hot chocolate to sip (spit out that latte you filthy inner westie trendy, spit it out now) and a warm fire (yes throw on the logs, teach those greenies a lesson) and a hard copy version of the Sunday Telegraph (how else can you line the budgie cage?)
And above all you have dear sweet Akkers as your guide to aboriginal people. Which is almost as good as Akkers giving you a guided tour of gay night spots. The lovable fat owl of the remove is just so at one with blacks and gays.
Don't believe me? It's all here in Piers Akerman's Aborigines trapped in Never-Never.
First let's get rid of the question of culture. It's always been a vexatious folly. After all, whites have never had to worry about the overwhelming superiority of white culture, so let's get over the stark and total inferiority of black culture:
In essence, the blind defence of Aboriginal culture has been a disaster. The reality is that few of the defenders of so-called traditional rights have the first clue about pre-contact Aboriginal culture.

Today, there is not a single Aboriginal living a traditional life. This is not a tragedy: it is a reflection on the fact that traditional Aboriginal culture cannot work in a 21st-century Western society.
Yes, yes, all that horseshit about witchetty grubs and didgeridoos and spears and boomerangs and painting up and singing and dancing and bark paintings and  initiation and rituals is all nonsense, only good for the tourist trade, and come to think of it, not much good for that.
What, you don't have a clue about pre-contact culture? Funnily enough, I've actually met pre-contact aboriginal people - yes, they're still alive - but why do you think that means Piers should give a stuff about their culture.
You see, blessed with intuitive vision and the sight seeing powers of a seer, like some kind of medicine man or witch doctor (or dare we say it kadaicha man) he knows what aboriginal people desire:
In truth, few Aborigines have demonstrated a deep desire to understand and practise the culture of their ancestors.
And how does he know this?
This was underscored when the National Museum displayed a suite of stone tools almost a decade ago. The spearheads and stone knives, all painstakingly napped and flaked, were the work of a white anthropologist because there was not an Aboriginal with the skills to make them.
Which reminds me of the time I went back to Tipperary and decided I didn't want to live in the bog Irish style of my great great grandparents. I haven't had the courage to go back to the Black Forest and see how the German peasant side of the family lived, but I rather suspect I won't be in to making cuckoo clocks either. Strangely enough, I don't have the skills to make a cuckoo clock as my great great grandparents undoubtedly did. Even more strangely, I can't speak German. Or Irish for that matter. Do the Irish speak Irish? Never mind.
Strange really, when you come to think about it. I'd have expected blacks to have mastered neolithic skills in stone tool making, but there you go.
Why even the U.N., with all their black helicopters, doesn't know what to do with them:
Not only would many aspects of traditional Aboriginal culture be in breach of Australian law, they would also be in breach of many of the UN’s unobserved treaties and obligations.

Sure the treaties and obligations are unobserved, but if blacks could observe them, they couldn't observe them because they'd be in breach of them, even if they are unobserved. What a primitive useless bunch of primitives.
Not that Piers is in favor of wiping out black culture, remembering of course that blacks can't actually remember any black culture. (The spearheads and stone knives tell you that). No, no, you can't get him in an easy trap like that:
In an interview with Sutton last week, ABC-TV’s Kerry O’Brien insinuated the author was in favour of assimilation, a taboo word for so-called progressives.

Sutton spotted the trap, saying: “Assimilation is a term that’s tainted with the idea that governments and churches would put pressure on people and even force them to become ‘Europeanised’, as it was called.
No, no, what we've got to do is lift them out of their stone age ways, except of course they don't have any stone age ways because the silly buggers can't even make a properly napped and flaked forty thousand year old spear head. QED!
Clinging to the facade of traditional culture and newly-invented rights will not protect Aboriginal children from abuse or improve the health of their parents.

Aborigines managed to survive in one of the harshest environments on earth through adaptation. Now they must adapt to the demands of modern society.

Which is to say, the demands of Piers Akerman, and let me assure you that his columns are amongst the harshest environments on earth. If blacks can learn to survive in them, they can survive anything.
But of course by now you've realized that the point of Akkers' column is to blame the Rudd government for everything, when everything was going so swimmingly for blacks under ten years of the Howard government.
And who else to quote to make the point than Wilson Tuckey, convicted for striking an Aboriginal man with a length of steel cable, and notorious for refusing to attend the apology to aboriginal people in federal parliament (one of five coalition members), and also well known for criticizing the decision that traditional dancers from the Aboriginal tribe which historically reside in the area of Parliament House would appear as part of the opening of Federal Parliament.
Who better to speak on the affinity of white and black?
As Liberal MP Wilson Tuckey predicted when Kevin Rudd made his Sorry speech in February last year, there has been no positive government solution beyond the showmanship.

Yep, maybe it's time to get out the steel pipes again. That'd sort out a few problems.
I mean, part of the problem is this payment of equal wages to blacks. If you start paying them like their somehow equal to whites, the cheeky fellers might think they're actually equal to whites (mind you, I've found the same problem with women, and all this equal pay nonsense).
The result? The blacks consigned to welfare in remote regions, when if they'd kept on accepting payment in sugar and flour and tea and 'bacca all would have been well with the world. Damn you liberal socialist progressives, damn you all to hell.
Let's face it the blacks and hopeless and troublesome and vexatious. Always have been. All this jibber jabber about land rights has only led to tears:
Indigenous rights, land rights and UN treaties have done nothing to improve their health, education or employment.

They may have comforted white urban ALP branch members, but were cold comfort for those they purported to serve.

As historian Inga Clendinnen noted in a review of Sutton’s book: “He is harsh on the gratifications to be extracted from the liberal-left position: the warming sense of moral superiority, the reliable pleasure of defending people denied agency by being cast as permanent victims.

“He is especially ferocious against those who would put the pursuit of ‘increasingly stratospheric rights and international covenants’ above the care and protection of brutalised children.”

You know, it occurs to me, and I'm hopeful that Akkers would agree, the time has come to strip away all those stupidly offered land rights, and settle the blacks in townships where they can be taught useful skills, like cooking and cleaning, so that they can find jobs and get modern. Perhaps tending to white folks' needs.
We don't dare mention assimilation, but no doubt given time we can in fact breed them out, or merge them into a modern world. As that noble servant A. O. Neville, so cruelly maligned as Mr. Devil in that wretched government funded Phil "the Red" Noyce's film Rabbit Proof Fence, cogently put it in his real world writing:
... they have to be protected against themselves whether they like it or not. They cannot remain as they are. The sore spot requires the application of the surgeon's knife for the good of the patient, and probably against the patient's will.
Soon enough, and with Akkers help, we can return to Neville's ultimate solution. Modernisation:
Scientific research had revealed that skin pigmentation could be bred out of Aborigines in two or three generations. If I could only have the money and the legislative power to start a selective breeding programme I could, in a matter of sixty to seventy years, solve the ‘Aboriginal problem’ by breeding a race of white Aborigines.”
Now back to your hot chocolate and enjoy your Sunday. The solution to the vexed problem of black people is close to hand.
First we must do away with the do gooders and the ignorant inner city elites ... and then we can make these blacks adapt to our way of thinking. Enough talk of land rights and culture and stone tools. Let them eat tea and scones and all will be well ...
What a fine world of inspiring John Hartigan journalism we live in, with News Limited offering work by men (and women) who combine deep knowledge of specific subjects with a talent for finding and reporting facts. Who could ask for more?
(Below: Ten Canoes, a film about sex and violence in ancient aboriginal times. Need I say more except to note that whites notoriously are uninterested in sex and violence). 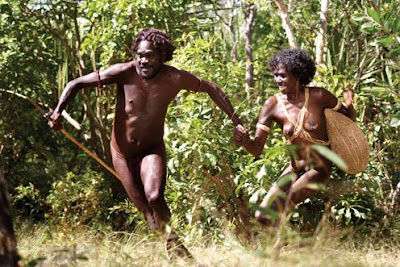 Posted by dorothy parker at 9:00 PM