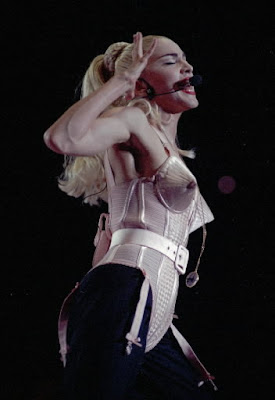 (Above: an example of this site's feeble attempts to emulate News Corp with a gratuitous shot of Madonna while trying to make a point about fetishism. Surely by now we've established our credentials for a career as a News Corp columnist?)
What on earth are we to make of this remark by Paul Sheehan?

And now it seems there's the intertube influenced Winton and his book, which brings the subject out of the closet, so to speak, so now it can be revealed that many many men have died lonely deaths in strange parts of the house or in hotels:
One of the characters in Breath ends up like Carradine, hanging lifeless in a closet, like a suit. Winton wrote the novel long before Carradine's death, because for years police have been finding the result of erotic asphyxiation gone wrong, bodies hanging in hotel rooms, closets, bathrooms. Many have been ruled suicides after a family member or friend sanitised the scene by removing sexual apparatus.
By golly, for a column that manages to list no more than three celebrity deaths, that's a pretty evocative image of a world gone mad, with men driven to insanity by what's available on the intertubes. Could this be the worst killer of all time, way ahead of passive smoking in cars, which can now only be used to understand less significant matters, like the way Tony Abbott experienced intellectual development difficulties in his youth.
Sheehan really isn't interested in making any sense on the subject. He starts his column by explaining that he doesn't get vampires:
I don't get vampires, avoid them at all cost, but Australia is having a love affair with them. The bestseller list is dominated by a 35-year-old American Mormon, Stephenie Meyer, whose vampire-driven Twilight romance novels hold positions one, two, three and four on the Herald's best-seller list. They've dominated the list for a year, spending a combined 192 weeks there. Australia alone would make Myer a prosperous woman but her four Twilight books have sold more than 40 million copies worldwide.

I don't get sexual asphyxiation, either, and have avoided the subject for years but it, too, is sitting there, surreptitiously, on the bestseller list, just below the Twilight dominance. It can be found in Tim Winton's latest novel, Breath, a best-seller which won the Miles Franklin Award last month, the fourth time Winton has won Australia's most prestigious literary award.
Well from reading this column, I dare say that Sheehan also doesn't get the cult of the goth, bright red lips, pale cheeks, Wuthering Heights (and its implications for women), corsets, fetish clothing, Betty Page, Betty Boop, Buffy, bondage, the beneficial power of garlic, silk stockings, six inch heels, conical steel bras, the importance of carrying a wooden stake, a cross and a set of silver bullets, the sense of style wearing only black provides, the joys of cross dressing and taking a walk on the wild side.
But can he stop blaming the internet for them and suggesting that somehow the full to overflowing tubes have produced a new pornographic social conformity among the young?
Can we just agree that the sudden outbreak of rampant sexuality in fundamentalist Christians and Republican governors has been around for a long time, well before the intertubes got going.
As the priests used to say to the young boys in my school, stop it or you'll go blind, or even worse, get hair on the palms of your hands.
Yep, there's very little that's new under the sun, and the sun has been rising (and setting, in a strictly metaphorical way) for a long time. Legends about sex and sex play and kink have been going around for an equally long time - why it feels like only yesterday I was reading Apuleius's  The Golden Ass (which involves an ass doing things) and Seutonius on what the emperor Tiberius liked to lick, but as with Sheehan's speculations, idle regurgitating of nonsense about how the intertubes made them do it, don't make it right ...
Which reminds of the story of the woman who kidnapped a male Mormon missionary and chaining him to a Devon cottage bed with mink handcuffs, and forcing him to have sex. It seems she might be the same woman as a year or so ago paid a substantial sum to a South Korean laboratory to have her pitbull terrier cloned.
Never mind whether it's true or not, the Daily Mail rehashes the original story of McKinney and the Mormon here.
And it's good clean salacious tabloid fun, as opposed to the sanctimonious pieties of Sheehan. And it's available on the intertubes. Even if it's a story that happened in 1978. You can surely see the sinister relevance.
Stand by for more cases of women kidnapping young Mormon missionaries and having their evil way with them. Using mink handcuffs. Oh intertubes you have so much to answer for, and you give so little.
Moral to the tale? There are more things in heaven and earth, especially when it comes to sex, than are dreamed of in Sheehan's limited philosophies ...
(Below: Joyce McKinney, the woman in the 'Mormon missionary with mink handcuffs' affair, proving the baleful influence of the intertubes on bondage in 1978, as well as elevating this site once again to the responsible level of News Corp reporting, in a fair and balanced way, while refusing to sensationalize. We maintain such high standards we'd ski naked down Mount Everest with a carnation up our nose rather than lower the quality of insight provided herein). 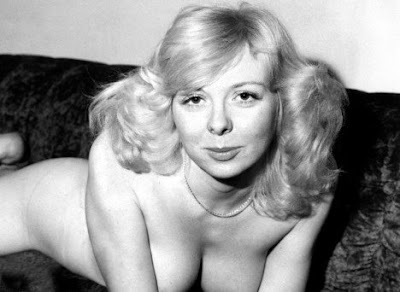 Posted by dorothy parker at 8:41 AM