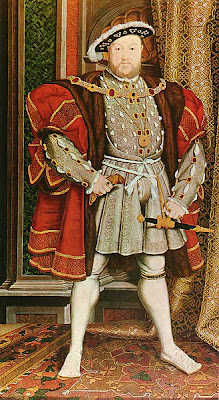 (Above: Henry the VIII, who knew about environmentalism, and architecture, and certainly knows the best way to deal with climate change sceptics).
It's a quiet day on loon pond - genuine eccentricity is a rare and valuable commodity - so it seemed only fair and just to see what our favorite future King of Australia, bonnie Prince Charlie, the aspirational tampon, has been up to in recent times.
And he never disappoints, though the extraordinary gyrations and mind games of the likes of David Flint in suggesting that we somehow live in a 'crowned republic', makes the bonnie Prince seem quite rational.
Other loons have a quite pedestrian imagination. Take Tim Blair - please take Tim Blair - and his paen in praise of super cars, Happiness a brute roaring on the grid.
Dropping these 290km/h beasts into an urban setting gives a place a jolt, if "jolt" sufficiently describes the effect delivered by an 18,000kW defibrillator.

That's around the combined power generated by a whole grid of V8 Supercars. It is a sight to behold. Or to feel. These cars shake the Earth. They also cause happiness. Just ask everyone in Townsville.
I never thought much of the campaign with all the women waving their little fingers at speed freak boys who find their masculinity inside a car. But suddenly I had an almost irresistible urge to wave my little finger in Blair's direction.
The rest of his piece is the usual squawk about the carbon police, as dull as it is predictable. He really should start reading some Dean Swift as a way of sharpening up his wit, but can you read Gulliver's Travels while coming at the sight of leather and chrome and sniffing the fumes and listening to the roar of the pulsating, throbbing, vibrating, slapping, pounding, penetrating, plunging rods of the engines?
So back to Prince Charles, who happily is due to become the next king of Australia thanks to the monarchists (damn you, damn you all to hell, you republican fiends, if you try to stop it).
The happy prince has discovered that Henry VIII was an environmentalist with a keen interest in architecture.
Golly, the reign of Charlie looks like it might turn into something terribly interesting and jolly. Can we look forward to a few more wives, and a beheading or two, or perhaps even a schism in the Church of England (well we're already well rid of the papists and their feeble attitude to adultery and divorce). Perhaps as well as executing modern day irritating feminists like Anne Boleyn, we could throw in the bonus torture of a monk or three.
Now you might think Charlie's attempt to rehabilitate Henry a tad unfortunate, given that he was an irascible tyrant who made Kerry Packer look like a benign social benefactor of cricket and casinos. How wrong you'd be as the Prince regales us with tales of how Henry passed laws in 1543 to protect against the felling of too many oak trees:
What was instinctively understood by many in King Henry's time was the importance of working with the grain of nature to maintain balance between keeping the earth's natural capital intact and sustaining humanity on its renewable income.

Oh the harmony of the Gaia goddess. Bow down you men to the feminine form divine.
Never mind that Henry was seeking to protect the supply of wood for the Royal Navy, he was, argues our Charlie, perhaps the first environmentalist, passing the very first piece of green legislation in Britain. And as for architecture? It's possible that the interest Henry exhibited may even be hereditary.
Well if you can inherit an interest in architecture, how about a gene for fitting up women for a beheading or two? By golly, that'll give the tabloids something to write about.
And I wonder what particular peculiar gene determines that any building built after the second world war is by definition a dastardly modernist or post modernist disaster, unless of course it pays homage to Christopher Wren or the ancient Greeks and Romans?
The rest of the Prince's speech for BBC One - the Richard Dimbeldy Lecture given at St James Palace in front of a live audience - contains a standard set of homilies about the environment. There's only 96 months left to save the planet, and we must switch immediately from an Age of Convenience to an Age of Sustainability. Not to mention the development of a sustainable urbanism. And thinking about the children:
If only because, surely, we all want to bequeath to our children and our grandchildren something other than the living hell of the nightmare that for so many of us now looms on the horizon.
As well as thinking about banking in a different way:
Just as our banking sector is struggling with its debts... so Nature's life-support systems are failing to cope with the debts we have built up there too ... If we don't face up to this, then Nature, the biggest bank of all, could go bust. And no amount of quantitative easing will revive it.
Golly, not much room for super cars in the new world of our latterday Henry. (You can read more in the UK Daily Telegraph here).
Here's Tim Blair, back on the 6th November 2002 boasting about how the monarchists in Australia cynically exploited the fear factor in the campaign for a republic by using 'power grab' rhetoric:
I was one of those cynical monarchists. For some reason the deputy editor of the Daily Telegraph, where I worked at the time, appointed me to run a kind of daily update on the upcoming referendum; a strange decision, because I was about the only anti-republican at a paper that was furiously pro-republic.

Perhaps she didn't know about my prejudices. Anyway, while most newspapers in Australia ran tons of "Hooray for the Great New Australian Republic!" items, the Telegraph suddenly became loaded with angry folk denouncing the proposed change. At one point I wrote a Republican Crossword, with clues like: "Bitter New York arts critic, back in Australia to boss us around."

I'd like to think, given the closeness of the result, that my little campaign may have been significant. On "mystic chords" … (link no longer working) Joanne Jacobs’s daughter, in the UK to study at Oxford, explains them well in this email home after the Jubilee celebrations:

"I couldn't believe how little security [Prince Charles] had, or that the queen had. When I asked a Brit about it, she said, 'Well, who would want to hurt the royal family? We love the royal family' … after the queen came out to light the final ceremonial flare, and we all gave her three cheers, fireworks lit up the sky. I'm telling you, I finally get the reason for the monarchy. Nothing in America inspires this much devotion."

Hear, hear!
I'd like to think that Tim Blair's campaign may have been significant too. I'd love to hear more about his devotion to bonnie Prince Charlie. Bend your knee you varlet (in the 'page, attendant or servant' rather than the 'rascally knave' sense of the word), kneel before your environmental superior.
The sooner we get the aspirational tampon hectoring and lecturing climate change sceptics like Tim Blair, the better. Let him arrange a tour of the colonies by private jet, I say, Al Gore style. Let him stand in kingly fashion in his stockings and berate them and remind them of the children and the environmental banking system.
And best of all, if his loyal subjects get fractious and start talking about crowned republics and the stupidity of warministas, how about a few beheadings and the odd bit of torture, Henry style.
Hear, hear!
(Below: as it seems the age of gasoline might be drawing to a close in the future - or as bonnie Prince Charlie starts to behead petrol heads and other fume sniffers - here's a little car porn for Tim Blair. Enjoy it while you can, because soon our new 'enry will join the long line of barking mad King Charlies. All thanks to you and your significant campaign). 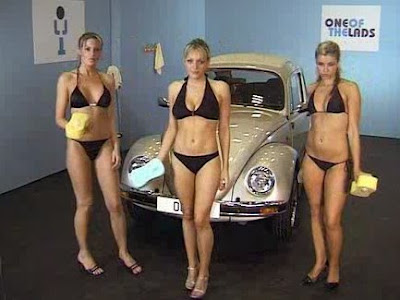 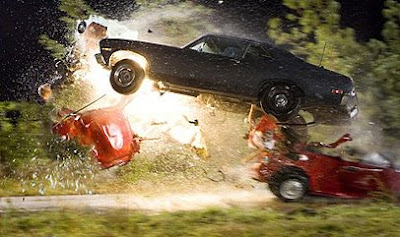