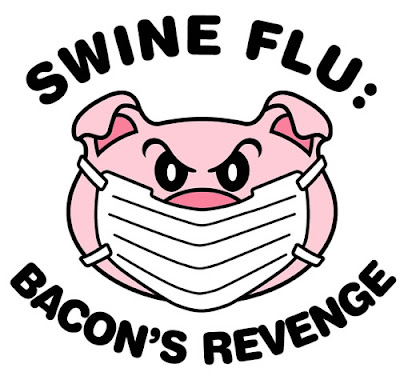 You know you're in the company of a fuzzy thinker when the word 'elite' pops out in a column.
The elites are responsible for so much it's a wonder they ever have time to rest in their busy work - but I guess the elites need to keep doing their thing, so people can expose, reveal and malign the elites for the filthy ideas which they constantly devise to inflict on long suffering humanity.
Take Tim Black on the subject of swine flu in his column Feverish obsessions with fantasy flu instead of real ills.
It's Black's important mission to establish that too much has been said and written about swine flu - by writing another column about swine flu.
Black knows the real source of the problem. Swine flu is the fault of flu geekery and the elites:
The elites' obsessive flusteria does not just detract from other, more serious, ailments. It also makes it difficult to put swine flu into any perspective, to contextualise it in terms of similar conditions. Take the following statistic from Britain's National Institute for Clinical Excellence: the average mortality rate of influenza in Britain is 600 deaths a year in a non-epidemic year and 12,000 to 13,800 deaths a year in an epidemic year. So while swine flu is, in rare cases, fatal, so are the other strains of flu that we cope with year in, year out.

Yep, I too am staggered that the 'leets haven't generated a global warming related hysteria about malaria and about Ross River fever shifting south and about the spread of tropical illnesses to Tasmania. Oh wait, they have you tell me? Filthy elites.
Right, and there's no doubt there's been an unhealthy hysteria about swine flu, in much the same way that the elites are unhealthily obsessed with sex and violence. And the best joy with this kind of column? Why if the elites don't pay any attention to swine flu, then they're guilty of dereliction of duty, and a dangerous taking the eye of the ball, and before you know it the Poms have scored five hundred runs.
But back to those damn pesky elites:
But now it is here, swine flu is likelier to be the object of jokes than panic among the public.

So while the occasionally tragic reality of swine flu is clearly not a creation of the authorities' feverish imaginations, the political and media obsession with it is.

A top-down politicisation of an illness has served only to obscure and problematise a clinical problem.

That most people seem largely unflustered by the hype simply reveals its unhealthy elite origins.
Pigs are the new unhealthy elite? Oh sorry, it's the hype that has an unhealthy elite origin. The pigs can pick up a 'get out of elite jail for free' card after passing go, while the unhealthy elite can get a good old clobbering, a roistering and a spiking.
So who are these 'leets? Well it seems that its politicians and officials and of course the World Health Organization, which has no doubt used black helicopters to spread pandemic panic.
But I'm not sure who's the hysteric here. Last time I heard Nicola Roxon speaking on the subject, she was trying to hose down an estimate of deaths which seemed extravagant. But Black is an object lesson in establishing that all the 'leets are in the conspiracy together. A global one - a full-scale siren-headed pandemic - and a parochial one. The 'leets are coming and we might not get out alive:
The public announcements continue. A worst-case scenario could see about 6000 people die from swine fluthis winter in Australia, federal Health Minister Nicola Roxon said yesterday in a pangloomian attempt to imagine the worst in the worst of all possible worlds.
But this is where a columnist has to get cunning. Here's the technique. First establish that the number of swine flu cases and related deaths in Australia are currently low, then attack likely carriers of 'leet catastrophist panic - the ABC and the Sydney Morning Herald - then throw in the WHO with their steady drip-drip of anxiety-inducing statements, with their be alert but not alarmed caveats, pragmatically cultivating fear, then bemoan how swine flu has been lifted from a level five to a level six global pandemic (never mind if this is deployed in its strict technical definition):
Never has fear been cultivated so pragmatically. Indeed, since swine flu provides the seemingly all too imaginable threat against which people must be protected, thus providing some semblance of a point to policy-making, one suspects that if the disease did not exist the authorities would have to invent it. Which, in a sense, they have.
Aha, they did invent swine flu. The filthy 'leets. The pigs are innocent! Save the pigs! Free the pigs!
While WHO preoccupied itself with second-guessing the apocalypse, the Prime Minister was advising people on basic hygiene. For the frighteningly unsocialised, or just the extravagantly rude, advice such as cover your mouth when coughing phlegm everywhere may have been useful, but for everyone else it just seemed to highlight the strange, exceptional nature of swine flu.

Yeah, well tell that to the guy who hacked and coughed then spat on the railway platform right next to me yesterday, but I guess I looked at him and just saw him as another 'leet fear merchant peddling the strange, exceptional nature of swine flu. After all, he was wearing a suit, so he couldn't have been frighteningly unsocialized. Maybe he was just extravagantly rude because he saw me as a 'leet promoter - even an inventor - of the swine flu hysteria.
Have we come to this level of uncertainty in our subjectivist relativist post modernist 'leet times?

Curse you elites. But what to do? Well how about you give yourself a 'get out of jail card' in the form of a bold caveat, just in case the pigs might have been involved:
Not that swine flu is to be taken lightly. By all accounts swine flu is more serious than normal seasonal flu.
Yaaay. Right at this moment you too can become a 'leet person by showing your 'leet understanding of swine flu by discussing swine flu and then by reassuring everyone it's all fine (unless of course you die from swine flu related problems, but let's just call that unfortunate rather than a justification for 'leet hysteria):
Biological sciences professor Ian Jones, summarising recent US research published in Nature, concluded that the new virus is about five times more pathogenic than seasonal H1N1 but that, nonetheless, the likely outcome to infection is recovery. For the few cases of severe infection the data will help in clinical management of hospitalised patients. Also having looked at the Nature research, Mark Henderson of London newspaper The Times noted: "It's not a mild illness, but neither does it seem especially severe. Perhaps moderate is the best term." Yet moderate hardly seems apposite for a strain of flu that has dominated the news headlines at various points during the past two months. And it is precisely that predominance that is the problem.
Well that's alright then. It's joke time right? Even the 'leet papers (yes a Murdoch rag can be 'leet) are telling us not to panic. Where's the problem?
Well it seems you don't understand that swine flu in fact reflects the dangers of having people worrying about pandemics. They've turned it into a politicized justification for socialistic public policy, perhaps even a perverted justification for socialized medicine, a potent symbol of fear more debilitating and threatening than the swastika.
Each policy announcement, each subsequent media report, ripping swine flu from any clinical context, adds to the impression that it is not just flu; it is something more significant. In other words, it is not just a moderate strain of influenza, it is an exceptional strain of influenza. So while politicians and officialdom are simultaneously forced to admit that, for most people, swine flu will not even require treatment, their incessant swine-flu chatter, their constant need to make announcements, to speculate and faithlessly reassure, ends up creating swine flu as something extraordinary.

Swine flu has become more than a clinical problem; it has become politicised, a symbol of the fear that legitimises and underpins security-conscious policy-making today.
Funny, I remember that the 'leets tried to change the name from swine flu to the banal N1H1 virus - as a way of trying to undercut the swinish hysteria - but to Mr. Black, that's just a terminological inexactitude  beloved by the "increasingly popular flu geekery". Can't get them coming, make sure you get 'em going.
Oh dear lord, I feel a panic attack about the 'leets coming on. The fear ... the fear ...
And then I began to notice certain words deployed by the good Mr. Black. Here's a sampling: "the narrative of swine flu", fear cultivated "pragmatically", "fear that legitimises", "cannot help but decontextualise", "what is problematic", "to contextualise it" and so on.
And I began to get the uneasy feeling I was reading something written by a tainted 'leet person, someone who had caught a whiff of semiotics and structuralism in an earlier life - perhaps from a coughing, spluttering academic who in turn might have caught it from a French academic - and become diseased for life. With an illness way worse than swine flu ...
And at that point the fear really gripped me. Because you see not once during his column - despite telling us that swine flu is being treated as a joke by the population at large - does Mr. Black give us a good swine flu joke.
Instead we get a lot of bluster and hot air about 'leets. Which is why I'm suggesting Mr. Black go kiss a pig so that we can all contextualize our lack of panic ...
(Below: a swine flu joke, credit to Panric). 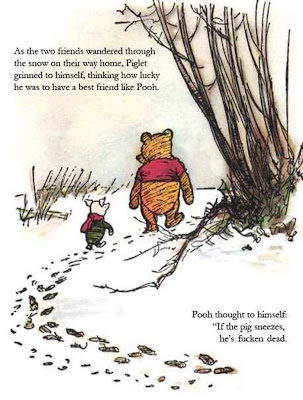 Posted by dorothy parker at 8:08 AM