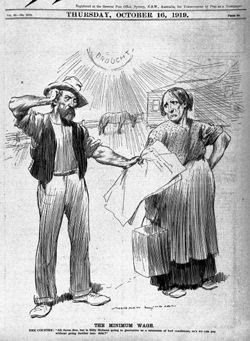 (Above: we have no evidence that Gerard Henderson or his father or his grandfather wrote the caption for this Bulletin cartoon 16th October 1919: The minimum wage: "All damn fine, but are we going to be guaranteed a minimum of bad conditions, so's we can pay without going further into debt?")
Today is Tuesday and yippie yi yo, it was bet collecting time.
Admittedly it was from a poseur dilettante who had no idea what they were talking about but you take your fun where you find it.
The poor lad couldn't believe me when I explained that reading that prattling Polonius, that desiccated coconut, commentariat columnist Gerard Henderson, would invariably within any column on any subject involve a reference to the Howard Years. Usually with a golden hue, or a rainbow like quality, or a halo affixed firmly to the memory.
It was like watching Old Faithful. Sure in the moments leading up to the gushing of the geyser you might have your anxieties and doubts. You'd turn up wondering whether the name was a trick, and given the frequency of the eruption (between 45 and 125 minutes) you might begin to think the epic trip might have turned into a curate's egg, with the geyser suddenly falling silent.
And then there's a whooshing and a wheezing and a spurting, and up comes the heated water, as reliable as ever.
It's the only way to get through some of Henderson's dry as dust columns.
In another life he writes a media column that flails about at others with a ponderous inaccuracy and a pretense at liveliness, but I guess when you're a short odds geyser in your own columns, you need a funeral director like solemnity to carry the day. And of course to show respect to the departed leader.
In Fair Work makes no sense in GFC, we have several Howard citations. The first references unemployment, noting that when Bob Hawke became PM, the unemployment rate was around 10 per cent:
When the Howard Government was defeated in 2007, it was around 4 per cent and there was a shortage of labour in significant parts of the country.
Thanks to labour market deregulation of course, nothing to do with digging up the country and shipping it overseas, especially to those filthy, fiendish Chinese, with their tendency to lock up Australian executives at a drop of a hat. Resources boom? Western Australia? Shortage of labor? Que?
But Henderson is so reliable, his next reference to Howard delivers a triple dunk whammy:
It is clear, however, that the commissioners and bureaucrats at Fair Work Australia will play an increasing role in regulating labour markets. What's more, Fair Work legislation restores many trade union privileges abolished under Howard's Work Choices legislation. And the overwhelming majority of academics covering the field - many have never run a business or worked in the private sector - can be expected to appear in the media supporting Fair Work Australia.
Yep, there's John Howard, and academics who've never run a business or worked in the private sector and evil trade unions peddling privilege for indolent workers, bludgers who want to destroy Australia.
Which leads me to wonder exactly how private sector Henderson is. According to his brief Wikipedia entry here, he's worked as an academic, in the Commonwealth Department of Industrial Relations, and was on the staff of both Malcolm Fraser and John Howard. But his main gig has been executive director of the Sydney Institute, a privately funded current affairs forum and think tank which relies on corporate sponsorship for a crust in this difficult and troubled world.
Which I guess is why his column is a tedious mix of personal recollections and pro corporate propaganda.
I was employed in the award enforcement section of the Commonwealth Department of Industrial Relations in the early 1980s. It became evident to me that the rigidity of the centralised industrial relations system was actually creating unemployment since there was not sufficient flexibility to make it possible for employers to retain workers at a time of recession. My experience as a public servant led me to condemn the prevailing system in an essay The IR Club, published in Quadrant in September 1983.
Dearie me Polonius, you've been prattling since 1983 about the importance of stripping away workers' rights and indulgences and bonuses and perks. Some things never change for the Old Faithful's of the world, first the bubbling and then the eruption, over and over and over.
In the latter half of the 1980s, the increasing call for industrial relations reform was led by Costello, then a barrister, and by Howard within the Liberal Party. After the recession of the early 1990s, Keating introduced significant reforms which saw the decline of the IR Club and the move to enterprise agreements.

A hit, a palpable hit. Another reference to Howard. And to Peter Costello. Both lawyers. Funny that academics with no experience of the private sector are uninformed while a bunch of lawyers kneecapping the workers are wunderkind for the commentariat.
But Henderson isn't just content to hark back to the recent past, his purvey takes in the old days:
Gillard is a long-time admirer of Henry Bournes Higgins, who established the Australian basic wage just over a century ago. Like Gillard, Higgins was full of the best intentions towards workers. But his Harvester Judgment of 1907 priced workers out of jobs and was substantially altered over the next two decades.
Well yes, and I've always regretted those labor laws that removed children from the business of climbing up chimneys and sweeping out the soot, since they were ideally sized for the job and were given a fair rate of pay for the work (and as they often died of lung related diseases required no form of socialistic medicine for their care).
And you might argue that it was Hugh Victor McKay's stupidity at Sunshine Harvester and his implacable opposition to doing any kind of deal with trade unions that led to the court case, and the Harvester judgment, but why actually spend any time on the specifics and merits of the case in question when you can just pluck a view out of the air, and perhaps even blame it for the great depression (which coincidentally occurred only a a decade after the judgment, say no more).
Anyway, it strikes me that there's been way too much mollycoddling of workers, what with the bizarre notion of the eight hour day and the five day week and a couple of days as a weekend, when in fact the best way to deploy the cattle (and get them away from the trough and off the teat) is to cut their working hours, junk their shifts and scrap overtime. Call them in at a moment's notice and then send them away when they've run out of blood and fresh blood is required.
A return to the vigorous opportunism and adventurism of the Victorian days would far better suit business in the perilous times of the GFC than the rampant socialism of that redheaded Gillard (when she could have had any color out of the bottle, she chose red! Say no more).
What we're facing is the return of an Industrial Relations Club which will set wages, enjoy support from journalists covering this area, and bankrupt business. Well when we say journalists, let's exclude Gerard Henderson and other commentariat columnists.
There's more of course - including praise for the Fair Pay Commission refusing to raise the minimum hourly rate of pay, without wondering why we have a Fair Pay Commission whose business it is to set a fair rate of pay, much as Henry Bournes Higgins determined an Australian basic wage way back when.
Bring back the days of frugal comfort I say. Why seven shillings a day should be enough for any working man with wife and child, and be damned to those who say otherwise.
But enough. Listening to Henderson gush like clockwork is a bit like listening to the ACTU's Sharan Burrow babble on about how hard the workers are done by. Sure, it's a fair show of steam gushing into the air, as predictable as the steps in the mating dance of the bower bird, but sadly in contrast to those natural phenomena, as dull and as tepid and rank and malodorous as ditch water.
Meantime, we'll keep a close look watch on Henderson's special pleading column, and try to fleece a few more unwary punters of a buck or two. Still never doubt the usefulness of Old Faithful. Comes the day he fails to mention Howard is likely to be a sign that the rapture is imminent ...
(Below: old faithful and buffalo roaming and give me a home, but no overtime or other fringe benefits. Yet another irrelevant image in the proud long standing tradition established a month ago by The Punch). 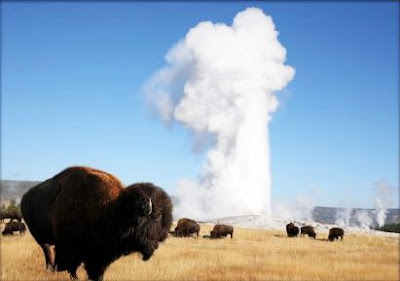