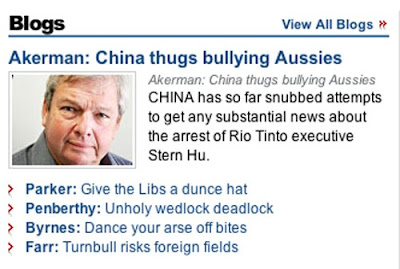 It seemed like another hard day on the intertubes. Being Thursday it was Akerman day and being Akerman it wasn't surprising to see the splash on the front page Akerman: China thugs bullying Aussies.
When Akkers gets hold of a bone, he worries it to death in bull terrier style, and only when the last bit of flesh has been stripped from it and the marrow sucked from the bone will he bury it in the back yard. Which doesn't stop him digging it out every so often to sniff and lick and munch on. And the more dirt, as you know, the tastier the bone.
So it seemed like the old China bone would be getting another going over.
Then came an alarming thought - what if the few remaining subs at the Daily Terror never bothered to read Akerman - after all, it must be one of the most draining and exhausting jobs on earth. Repetition after repetition, fear and loathing, whining and stomping around, re-hashing old grudges over and over until the track in the shellac is worn down by the grinding effect of the needle.
So what has Akkers got to say about China in his latest piece, which turns out on the actual page to be titled PM turns blind eye on thugs bullying Aussies?
Just this as a taster:
Kevin Rudd has now let down Australian citizens in two foreign countries. The Chinese Government has so far snubbed his attempts to get any substantial news about the arrest of Rio Tinto executive Stern Hu.
It would of course be a much simpler sentence and a much shorter column if Akkers had written: Kevin Rudd has now let down all Australian citizens in Australia now and forever and ever, amen, and in any foreign country I can find a story to write about. Fill in the details at your own leisure ...
But instead Akkers drags out the Indonesian bone, using the murder of Australian Drew Grant in Papua province as an excuse to berate Indonesia and the Rudd government.
Never mind that Akkers and his ilk went missing on what Indonesia got up to in Papua in the old days, and displayed extreme hostility to the notion that Australia might shelter Papuan refugees. Never mind that Indonesia has at last managed a decent presidential election. Never mind that the murder is subject to a police investigation, still in relatively early days.
Akkers knows all about it.
The Australian Government is too timid to point out that security forces around Freeport have in the past resorted to standover tactics to blackmail the mine into paying higher premiums for peace.

It’s a practice that some say provided an incentive for security forces to attack the mine to justify their lucrative presence.

While Indonesian security forces continue to have to find the means to meet their budgets while on the job, it seems unlikely the central government will be able to contain regional corruption.

The Australian Government has sent two police officers to assist Indonesian authorities but they are likely to run into political interference from both the Indonesian and Australian Governments.
Political interference from the Australian government? Presumably he's basing that on the craven attitude of the Howard government to Indonesia during its time in office. Or perhaps he's basing it on nothing at all, except the mad bone munching of a terrier with the subtlety and wit of a bull in a china ship.
Freeport is Indonesia’s largest taxpayer and its military, despite the setback forced on it by its withdrawal from East Timor, remains an entity largely beyond control.

The Australian-Indonesian relationship, no matter what Rudd’s spin doctors will claim, has gone backwards since the Rudd Government came to office.

Say what? So the Rudd government has no relationship with Indonesia and Indonesia has no control over the military in Freeport? Well good luck to their campaign of political interference then.
Meanwhile, Akkers has solved the case. The Indonesian military did it. How's that for investigative prowess up against due process (Golly I bet he's a dab hand at Cluedo).
But wait, it wouldn't be an Akkers column if we didn't drag another bone out of the back yard for a salivating if irrelevant munch:
A prime example is shown in the Australian Government’s failure to lay charges against accused East Timorese murderer Guy Campos, who entered Australia on a pilgrim visa during the Pope’s Youth Day visit.

Well actually every day we live and breathe under the Rudd government, Australia lives in a hell hole of dire inhumanity, of epic failure and abject incompetence, of profound disaster and inhuman suffering.
Faced with the challenges of Hu’s arrest and the murder of Grant, the Rudd Government appears impotent.

Making speeches in Mandarin may make Rudd feel better but it won’t bring transparency to any case the Chinese authorities may make against Hu.

Addressing the Australia-Indonesia Society may promote a warm inner glow but the words are worthless if Grant’s murder remains unsolved.

Diplomacy demands more than words alone . . . it requires trust and a determination to back words with actions.

Which is why I think Akkers will back this site's demand that chairman Rudd immediately drop all other duties and proceed to Papua to solve the murder mystery, and having done that - I think the two days we've allocated is more than sufficient - then proceed on to China to obtain the release of Stern Hu.
Now the latter matter is more tricky - busting a business executive out of prison isn't the easiest job - but that's why we're proposing that the government hire Tom Cruise and treat the whole thing as a Mission Impossible caper. Sequel and spin off rights will be sold separately.
Failure to do so will establish the credentials of chairman Rudd in craven cowardliness.
The failure of the Rudd Government to act on behalf of Australian citizens abroad is in keeping with its dismal record in almost all other areas of policy.
Yes indeed. A totally dismal record of complete and utter disaster. Why if they hadn't found that stout British lad lost in the Blue Mountains without his mobile phone it would have been yet another black mark against the Rudd government.
And their refusal to deal thoughtfully with the Michael Jackson murder case indicates extreme contempt for Jackson's Australian fans. While the tsunami alert indicates extreme incompetence - wave, what wave - and the bones of a woman found in a cave on the central coast indicate the abject failure of the law and order policies of the Rudd government (I know, I know, she's been missing for seven years. Details, you pedant, details).
Oh yes Rudd might be able to speak Mandarin, but how's that a match for hysterical English Akkers style.
But the funniest thing of all? After beating the drum loudly, the Murdoch press has now decided it can catch Rudd coming and going. While Akkers is over in one corner, there's Jennifer Hewett over in The Australian with PM's harsh tone may misfire.
Here's a sample:
Kevin Rudd's decision to publicly up the ante in his reaction to the Chinese detentions of Rio Tinto executives is curious as well as extremely risky.

The Prime Minister's words were his most critical so far, and will reverberate loudly in Beijing. To what purpose is far less clear. The rhetoric is more likely to further irritate the Chinese than it is to persuade them to change course over the imprisonment of Stern Hu.

Rudd would presumably appreciate that. It suggests that his comments are designed more for domestic consumption and for blunting the opposition's hysterical demands for the government to pick up the phone.
Speak up in Mandarin, no don't speak up, too extremely risky.
Certainly Rudd's firm warnings will sound tougher and more decisive at home. In China, it will make it even harder for any possible resolution to be quietly negotiated through diplomatic channels. What now?
Quiet diplomacy, no stern action. No, no - stern action needed, right now.
Well if you relied on the Murdoch press for insight, the world would likely be at war within the week.
So it goes. That's the bones thoroughly chewed this week, time to put them back into the ground until they come in handy again. And isn't it comforting to realize that it isn't just dogs that can see the world in black and white.
Oh I know that might be an area of scientific dispute, I know there might be claims that dogs can see red, blue and other colors, but trust me if you're Akkers and you're looking at the world, it's strictly black and white.
(Below: Gustave Dore's Andromeda on the rocks, 1869. One of the earliest examples of an artist capturing the way the Rudd government puts women in peril. Note the crocodile bottom left hand corner, the artist's nuanced way of including Chairman Rudd in the painting). 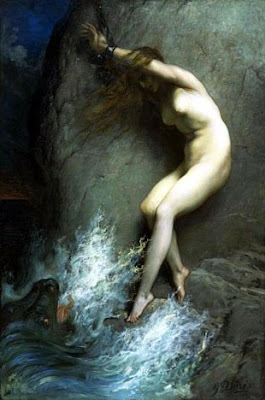 Posted by dorothy parker at 8:02 AM